Get the app Get the app
Already a member? Please login below for an enhanced experience. Not a member? Join today
News & Media Letters: Yellow Marvel

Dave Hirschman and Mike Fizer’s story on a Super Cub restoration made more than a few readers nostalgic—and envious.

“Thanks for your article on the original Super Cub restoration. It was all great, but I especially enjoyed the description of your flight in the airplane. You made me feel like I was right there with you. I’ve only had my PPL for a year now, and I was 62 years old when I finally got it. One of my first flights as a teenager long ago was in a Cub taking off from a neighbor’s pasture.”

Many thanks for the great article in this month’s AOPA Pilot. The nostalgia was indeed palpable and almost strong enough to taste. While my dad was working on his CFI, back in the 1940s, much of his flight time was done in the Super Cub at our local sod field airport. The back seat was wide enough for two kids, 6 and 8 years old, to ride with him.  We got lots of time that way. Your work brought back many memories. Thanks also for the great photos.

I very much enjoyed your article on Roger and Darin Meggers. One part of the story that got left out was what great folks they are. I had the opportunity to meet them in July of 2011 when I fell out of the sky over Baker, Montana, with a serious oil pressure problem in the right engine of my Grumman Widgeon. We were headed to Oshkosh.

We pulled up in front of the Baker Air Service hangar and were greeted by Roger. He dropped what he was doing and went to work on getting us to AirVenture. When Darin came in from a charter he, too, pitched in. In fairly short order they had us on our way. Their quick response was more than we could reasonably expect. In how many other places would this have happened so quickly?

I read with interest (and envy) Al Marsh’s article on unusual attitude flying at Stallion 51 (“P&E: Technique”). I liked his disclaimer about flying in the L–39 and P–51 on the same day—that we didn’t. How about this: I flew formation with my twin brother in the two Crazy Horses—and he didn’t.

I took my twin brother John (a retired Air Force pilot) and we serendipitously ended up flying formation in the two Crazy Horses. My instructor pilot (IP) was John Posson, and my brother John’s IP was Eric Huppert. It was one hour of the most amazing flight I will probably ever have. We did an unscripted low approach to the 82nd Airborne troops at Avon Park, and then separated to do aerobatics, including aileron rolls, barrel rolls, loops, chandelles, flight at critically low airspeed, stalls and falls, and then a combat rejoin for the traditional break over the Kissimmee airport to land.

I have been in awe of Lee Lauderback for years, with his consummate skill in the Mustang. I was impressed with Marsh’s abilities to handle and cope with the shrouded scenario he was mandated to contend with. I am glad he had a good experience, even if, as he said, the IP’s focused more on fun.

This is a timely and important article covering areas of ADS-B, which we will all be involved in the next couple of years (“P&E: Technology”). This applies to aircraft owners, renters, and club operators.

Although this article covered several questions that we all have concerning ADS-B In, hopefully, you will cover a few ADS-B Out options, which is the 2020 FAA mandate. I’m even now considering a portable option for the ADS-B In because the screen view of traffic and weather may be better than what can be displayed on the built-in GPS receiver screen.

What I’d like to know is what’s now available for the required ADS-B Out and if we should go ADS-B Out only, so that we have more options than the combination ADS-B Out/In equipment. There seem to be so many choices, and what we need is a table or chart listing what’s available. Or maybe this is just another reason to attend the AOPA Fly-Ins. 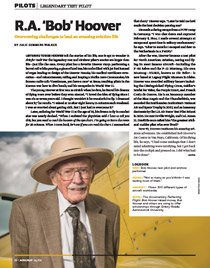 I really enjoyed Julie Summers Walker’s story about Bob Hoover (“Pilots”). Over my aviation career I’ve been fortunate to have met him at the Reading Air Show, numerous NBAA conventions, and AOPA events.

I recommend his 1997 autobiography, Forever Flying. It is an excellent read.

“It is very difficult to encapsulate, in one page, the career of a legend who has made such a significant impact on aviation. But as you listed Bob Hoover’s awards and honors, you omitted one significant recognition. Robert A. Hoover was enshrined in the National Aviation Hall of Fame in Dayton, Ohio, in 1988 and is one of only 204 individuals to be honored since the Hall of Fame was chartered by the United States Congress in 1964.”

In the thick of it

I read Barry Schiff’s column about getting in and around LAX in a Cessna 172 (“Proficient Pilot”). He asked the appropriate question: “Why would you want to do that?” But he didn’t wait for an appropriate answer. As pilots, we need to be ethical and considerate when exercising our right to fly. The radio training could have easily been accomplished at a busy GA airport. Yes, flying into LAX is legal, but it was also inconsiderate and inherently more dangerous than the local GA airport.

If a prominent columnist of the premier GA magazine doesn’t have the good judgment not to take a Cessna 172 into a busy international airport where approach speeds of 200 knots or more are the norm, then how can the nonflying public respect the judgment of any GA pilot?

This inconsiderate act could prompt a call for user fees at busy commercial airports. The freedom to fly is at risk when pilots don’t act responsibly. I hope Barry would apply his wisdom a little more thoroughly next time.