Get the app Get the app
News & Media Quick Look: Sabreliner 65

The Sabreliner was developed in the mid-1950s by Los Angeles-based North American Aviation to satisfy a U.S. Air Force requirement for a twin-turbojet trainer and utility transport. 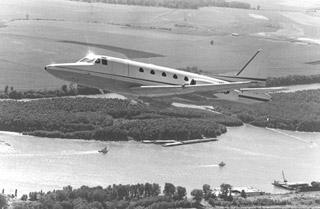 The Sabreliner was developed in the mid-1950s by Los Angeles-based North American Aviation to satisfy a U.S. Air Force requirement for a twin-turbojet trainer and utility transport. Designated T–39, the aircraft was dubbed Sabreliner because it resembled North American’s sweptwing F–86 Sabre fighter. Eventually, the manufacturer and its successor company, Rockwell International, built more than 200 T–39s that were used for training, VIP transport, and support missions for the U.S. Air Force and U.S. Navy.

The Sabreliner 65 (designated NA265-65) was the last in the series of twin-engine medium business jets that evolved from the T–39. The first civilian model, the Pratt & Whitney JT12 turbojet-powered Sabreliner 40, entered service in the early 1960s, followed several years later by the stretched Model 60, then the larger Model 75, and finally the Sabreliner 65. All Sabreliners can be easily recognized by their signature eyebrow cockpit windows.

Based on the Sabreliner 60, the Sabreliner 65 had the distinction of being the first civilian aircraft with a supercritical wing, which was designed by aerodynamic engineer extraordinaire James Raisbeck. Combining the efficient airfoil with Honeywell (nee AlliedSignal) TFE731-3 turbofans gave the Sabreliner 65 transcontinental range and made it the longest-legged mid-size aircraft of that era. A prototype first flew in June 1977, and FAA certification was achieved in November 1979.

Sabreliner 65 cabins typically are configured with six seats, but some aircraft are outfitted with up to eight, including an optional belted potty seat. Luggage can be stored in either a forward baggage compartment or in the full-width aft lavatory. An auxiliary power unit was optional.

A total of 76 Sabreliner 65s were built between December 1979 and October 1981. In 1982 Rockwell halted production of all Sabreliners—but continued to support the approximately 800 T–39s and Sabreliner 40-, 60-, and 75-series aircraft that were in the field. Besides being flown by corporate owners, the Sabreliner 65 was operated by the Swedish Air Force.

In June 1983 Rockwell spun off the Sabreliner division into the independent Sabreliner Corporation, which not only serviced and provided parts from its St. Louis-area facility, but also developed a host of airframe and interior modifications designed to enhance the performance, service life, and appearance of the aircraft. Sabreliner Corporation also earned supplemental type certificates for the installation of new cockpit equipment such as Honeywell’s Mark VIII enhanced ground proximity warning system. Support is now being provided by a successor company called Sabreliner Services.

A popular modification for Sabreliner 65s has been Honeywell’s TFE731-3DR-1D engine upgrade. The package includes an improved combustor, HP diffuser, and HPT nozzle, as well as new blades, seals, and disks. Honeywell says installation of the -3D upgrade increases the life limits of turbine disks and other components and improves engine durability, reliability, and performance, while lowering the cost of ownership.