Get the app Get the app
AOPA will be closed July 4th, in observance of the Independence Day holiday. We will reopen at 8:30 am ET on Tuesday, July 5.
News & Media Paying it forward

Sean D. Tucker has a distinctive way of showing his appreciation—one that involves both positive and negative Gs, and more than a few unusual attitudes. A ride in Tucker’s Extra 300L over Oshkosh, Wisconsin, during EAA AirVenture left Aaron Wypyszynski with a huge smile, and an appetite for more—not to mention a Hall of Fame aviator’s signature in a logbook that also includes more than 200 Young Eagles flights in four years.

“Aw, that's insane. That is awesome,” Wypyszynski said, climbing out of the cockpit (with no apparent difficulty) after a half-hour flight that included an outside loop (negative 4 Gs), hammerheads, barrel rolls, two-point half-rolls to and from inverted, an inverted flat spin, and even a lomcovák—none of which proved daunting to the young father who has made it his own mission to share the joy of flight with youths, replicating for many others his own introduction to the joy of flight. “That is too cool.” 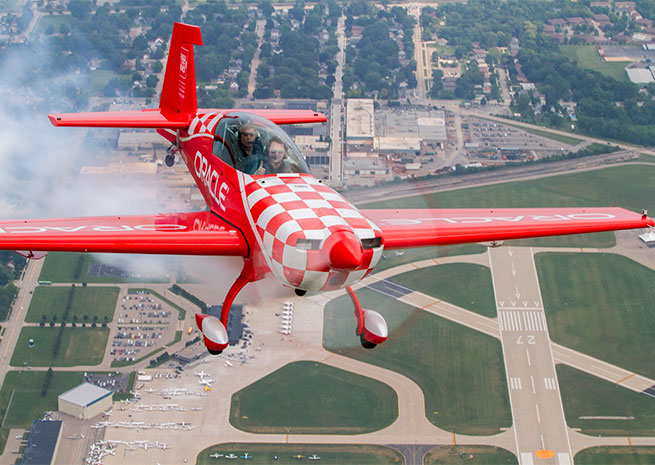 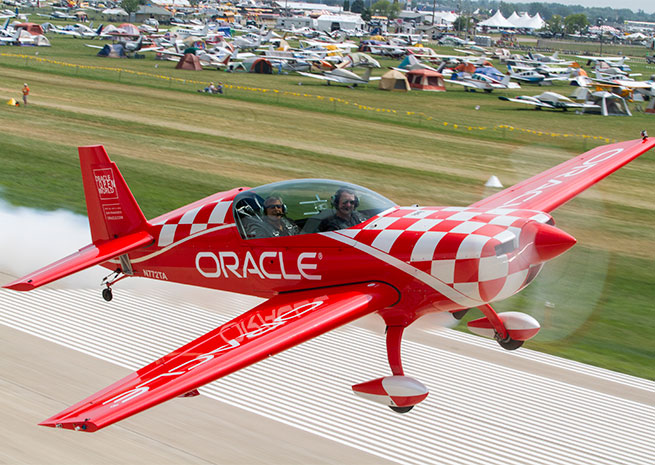 Wypyszynski, of Meridianville, Alabama, said a Young Eagles ride followed soon after his first flight lesson at age 13, and made him part of an aviation family.

“It's what really opened my eyes to general aviation and what it was like to share the passion of flight,” Wypyszynski said. Also an AOPA member, Wypyszynski is president of his local EAA chapter and is working with his aviation family to build a Wittman Buttercup. Wypyszynski works as a flight test engineer, and has launched a company, Wyp Aviation, to patent and develop a wing board that will elevate the concept of the nautical wakeboard into the sky.

Tucker has invested a great deal in the Young Eagles program since taking over as chairman, awarding prizes including a chance to train at his aerobatic school to volunteer pilots during EAA AirVenture. Tucker said another such drawing is in the offing.

“I think it's really going to grow,” Tucker said. “It's just saying thanks to our men and women.”

Tucker, who also wowed the crowd with his signature airshow performances during the week, has made a point to fly at least one volunteer and one Young Eagle at each of his 2014 tour stops.

Tucker credits many aviation legends among his own mentors, and said it gives him joy to pay it forward. 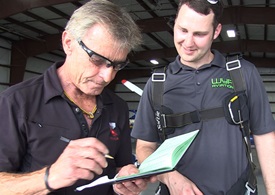 “I love to fly with the coordinators, with the pilots ... because everybody is so important,” Tucker said.

With no signs of wobbly legs or bloodshot eyes (even after his very first negative G experience in that outside loop), Wypyszynski grinned as he stepped down from the Extra and soon grabbed his logbook. Tucker said Wypyszynski has the makings of a fine aerobatic pilot in his own right, and showed impressive skill. Not every Young Eagles volunteer gets quite so wild a ride, Tucker noted.