For every flight instructor who has ever wondered just exactly how well a student manages their solo practice assignments, Hilton Goldstein has an answer: WingX Rewind, to be included in WingX Pro7 with an August update from Hilton Software, brings the flight data recorder into the general aviation cockpit, recording a range of parameters drawn from flight instruments (as available) at an impressive rate of 10 times per second. Yet the data file for a one-hour flight will weigh in at only 240 kilobytes, smaller than a single photo taken by a typical cell phone.

“It’s fundamentally different from breadcrumb tracking,” Goldstein said at a July 31 press conference at EAA AirVenture in Oshkosh, Wisconsin, referring to position data that can be recorded through any number of GPS applications.

WingX Rewind also can record information from an Attitude Heading and Reference System (AHRS) linked to the iPad, as well as pitot/static and ARINC 429 data (a standardized avionics data transfer format). Many Automatic Dependent Surveillance-Broadcast receivers now on the market capture AHRS data, and WingX is designed to capture that pitch and bank information from most. (There are nine ADS-B receivers, including systems from Levil, FreeFlight, Zaon, and others, that are compatible with WingX Pro7 as of mid-2014).

The data can be played back through WingX Pro7, with synthetic vision, attitude, speed, altitude, and other information displayed as the flight unfolds. Users can fast forward, rewind, or watch the entire flight re-created moment by moment. Goldstein said that data can be shared, and gives flight instructors good reason to incorporate electronic flight bags in their curriculum. Notes can be added to the flight record, and it will eventually be exportable to other applications such as Google Earth.

“I think this is just the start,” Goldstein said. 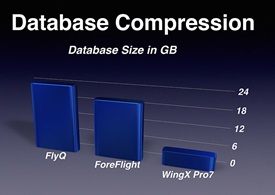 WingX Pro7 is available through the iTunes Store for $74.99 per year, and offers common EFB features including ADS-B weather and traffic (via compatible systems), weather data, instrument procedures, notams, and more. It can connect wirelessly via Bluetooth and Wi-Fi to various devices, and takes up less space on an iPad than other EFB applications with the same feature set. A 16 GB iPad can be loaded with a full set of WingX databases (U.S. charts and high-resolution terrain) with enough memory left over to store thousands of hours of flight data.

Goldstein also noted that WingX Pro7 is compatible with the Pebble, a wristwatch-sized (and shaped) display that is gaining popularity among military aviators.