From reader Frederick Cohen: True or False? The first successful ditching (no fatalities) of a passenger flight in a jetliner was performed by Capt. Chesley B. “Sully” Sullenberger when he landed US Airways Flight 1549, an Airbus A320-200, in the Hudson River on January 15, 2009. 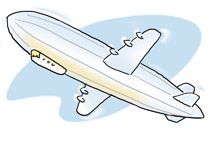 1. From reader Frederick Cohen: True or False? The first successful ditching (no fatalities) of a passenger flight in a jetliner was performed by Capt. Chesley B. “Sully” Sullenberger when he landed US Airways Flight 1549, an Airbus A320-200, in the Hudson River on January 15, 2009.

2. The frequency of lightning flashes generated by a cumulonimbus cloud is an approximate measure of the thunderstorm’s
a. height.
b. potential for structural icing.
c. turbulence.
d. precipitation.

4. When encountering light turbulence, the indicated airspeed of a light airplane can vary between five and 15 knots. What airspeed variation can a pilot expect to see during an encounter with extreme turbulence?

5. True or false? The largest German airplane to attack Great Britain during World War I was built by Zeppelin.

6. What was America’s first all-metal fighter? Hints: It was the first monoplane to enter U.S. military service, the last with an open cockpit, the last with fixed landing gear, and the last with externally braced wings.

1. False. The first successful ditching of a jetliner was performed by 27-year-old Aeroflot Capt. Victor Mostovoy, who landed his Tupolev TU–124 in the Neva River near Leningrad, USSR, on August 21, 1963. All 52 occupants survived.

4. The airspeed indicator at such a time is typically unreadable because of a combination of extremely erratic instrument fluctuations and involuntary movement of a pilot’s eyes within their sockets.

5. True. In addition to airships such as the Graf Zeppelin and the Hindenburg, the Zeppelin company also built the Zeppelin Staaken R.VI. This bomber also was larger than any used by the Luftwaffe to attack Britain during World War II.

6. Introduced in 1934, the revolutionary P–26 Peashooter was Boeing’s fastest fighter and for a while was America’s fastest. It was called a Peashooter because it had a long, tubular gun sight that resembled a pea shooter.

7. Most often found on sailplanes, they are used to wipe bugs off the leading edges of wings during flight to prevent the bugs from disturbing the smooth flow of air over the wings. (A video of bug wipers in action can be seen on YouTube by searching for “Bug wiper testing.”)

8. (a) Density altitude can be approximated by adding 60 feet to the elevation of an airport for each 1 degree F that the ambient temperature is greater than the standard temperature for that elevation.