A beautiful day in Massachusetts

Blue skies and temperatures in the 70s greeted the more than 2,300 visitors to the third AOPA fly-in in Plymouth, Massachusetts, Saturday, July 12. 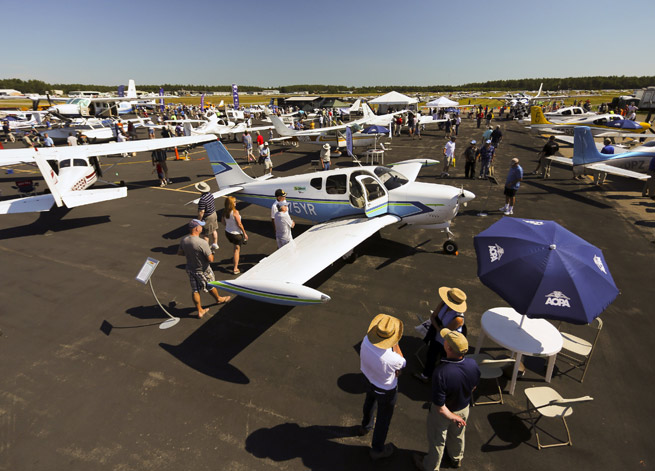 Blue skies and temperatures in the 70s greeted the more than 2,300 visitors to the third AOPA fly-in in Plymouth, Massachusetts, Saturday, July 12. “It’s a beautiful day in Massachusetts!” declared AOPA President Mark Baker to a packed crowd at his Pilot Town Hall, which capped off a day that couldn’t have been more perfect for a fly-in. The local EAA chapter served up pancakes and sausage patties to early risers. Aircraft of every shape and size—including more than a few seaplanes—arrived all morning. Seven food trucks from the New England area descended on the field, offering a variety of food—from local seafood to Asian specialties—free to AOPA members and their families. At midday, all eyes turned to the sky as Mike Goulian, the airshow performer who is based at Plymouth, whipped his Extra up, up, and over the crowd, providing a superb demonstration of aerobatic skill. Seminars were packed with attentive listeners. “We think these fly-ins are what you want,” Baker said. “We want to reach into the community; give you what you want—a low-cost local event. I hope you’re glad we came.”

The airport’s military aviation tradition continues today. Chino is home to a wide variety of warbirds, many of which are airworthy and fly regularly. Do not miss Chino’s two world-class aviation museums, Planes of Fame Air Museum and Yanks Air Museum. The museums have divergent collections and different objectives, so seeing one is not like seeing the other. Half a day is not long enough to explore both.

Less accessible, smaller, and every bit as interesting is Aero Trader, a private warbird maintenance and restoration business. While the company has restored an incredibly diverse range of warbirds, it specializes in the North American B–25 and P–51. In fact, the company owns the B–25 type certificate and has all the engineering drawings for the World War II medium bomber, allowing its craftsmen to make brand-new parts for the model.

In the 1980s Lockheed Martin built facilities on the field for a C–130 modification program; today the complex is home to Encore Jet Center, one of the field’s FBOs, and used for aircraft storage. Don’t be surprised to see sprinklers, tractors, and good-looking grass on the field; a portion of the airport property is used as a sod farm.

Admission is free. Members can assure a free lunch by completing the RSVP form online (www.aopa.org/fly-ins), and volunteers are appreciated.

Go with the Flo’s

Flo’s Airport Café at Chino Airport (CNO) in Chino, California, is where the area’s agricultural and aviation interests intersect. This is evident from the various baseball-cap logos, conversations at nearby tables—even in the lobby, where adjoining racks hold stacks of aircraft sales publications and farm equipment catalogs. And Flo’s isn’t just good—the 50-year-old eatery is legendary. Just ask the pilots.

“I have lunch here almost every day,” said Rick Remelin of Costa Mesa, California, an ATP and CFI. “Everything is scratch-made here.” He said that the pies are very good, too—especially Banana Supreme, which “is to die for.”

Thursday morning sees an aviation tradition as old as the restaurant itself, as pilots from around Southern California fly in for breakfast, maintaining a legacy started in the 1960s by Civil Air Patrol members. On a Thursday in May, George McDaniel arrived around 6 a.m. from Long Beach in a Cessna 150. Tom Griffin also flew from Long Beach in a Cessna 172. “I get hungry about breakfast time,” Griffin laughed. “I resisted getting up so early for years.”

“Basically, we just like getting up and going flying,” said Don Thompson, who arrived in a 1950 Bonanza B35. “We’ve had as many as 34 people show up.”

Today’s group of 10, a bit smaller than usual, also includes pilots from El Monte and Fullerton, flying a Beech Sundowner and a Piper Cherokee Six. Menu choices range from oatmeal to omelets to a salad, but the conversation is pure aviation. They talk about the temperature inversion climbing out of Long Beach, flying in the desert, and recent and upcoming EAA Young Eagle flights.

Wendy Fragner has been their regular waitress since she started at the restaurant 24 years ago. “They just say, ‘My usual,’ and I write it,” she said. “I’ve been taking care of them for a long time.”

Eventually the tone of the brisk conversation shifts. “I have a meeting at nine,” Thompson comments. “I still have to decide whether I’ll wear these shorts or put on pants.” By 7:15 a.m. the sun is higher in the sky, the last airplane is taxiing for departure, and silence returns to the sunlit ramp.

Plymouth by the numbers
2,300 Attendees
495 Aircraft
264 Volunteers
43 Camping aircraft
34 Exhibit booths
35 Aircraft on display
2,208 Lunches served
74 Rusty pilots learning how to get back into aviation

Video Extra: See the fun in Plymouth in this online video. 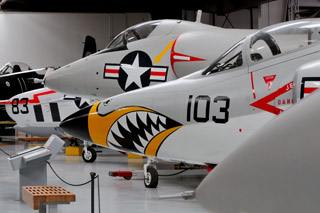 The fun heads west to Southern California as AOPA makes final preparations for the Chino Fly-In on Saturday, September 20. Chino Airport (CNO), about 40 nautical miles east of Los Angles, is the place to meet your fellow pilots and AOPA members, learn during educational seminars, and check out aircraft and product displays. Bring your appetite, too—breakfast will be served, and lunch is free to AOPA members (please RSVP).

Chino’s airport has a rich heritage. It was built in the early 1940s as a training base for Army Air Corps pilots, explained Robert Cayce, Chino Airport operations manager. Several of the base’s original buildings not only still stand, but remain in use. “They were only intended to last six years,” Cayce said. “Now we’re some 70 years later.” The airport was transferred to San Bernardino County in the 1960s. “It was originally named Cal-Aero Field. It has steadily grown over the years.”