Get the app Get the app
Already a member? Please login below for an enhanced experience. Not a member? Join today
News & Media Bearhawk shows quick-build LSA 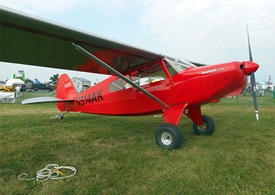 Bearhawk Aircraft recently showed off its newest two-seater, now available as a quick-build kit, an aircraft with the strength to carry 1,500 pounds but able to meet the definition of a light sport aircraft (LSA) at 1,320 pounds gross, and still have enough useful load for a typical pilot and baggage with full fuel.

Company owner Mark Goldberg completed the first quick-build kit and flew it from Texas (Bearhawk Aircraft is based in Austin) to Oshkosh, Wisconsin, in 9.7 hours to show off the aircraft at EAA AirVenture, the company announced Aug. 12.

Goldberg’s quick-build LSA version is powered by a Continental O-200 (105 horsepower) and weighs 818 pounds empty, though the company notes on its website that builders who seek maximum weight reduction can achieve a 725-pound empty weight.

The kit designed by Bob Barrows shares the short-field capabilities of the two-seat Bearhawk Patrol and four-seat Bearhawk models. The company states in its Aug. 12 press release that the Bearhawk LSA achieved a takeoff roll of 94 feet, and a landing roll of 140 feet during the STOL competition held during EAA AirVenture.

The Bearhawk LSA is sold in a quick-build version (which does not require welding) for $36,000, and also in a kit that requires some welding for $30,000 (prices listed on the company website). Bearhawk also sells fuselage and wing kits separately.