Get the app Get the app
News & Media Werth loses engine 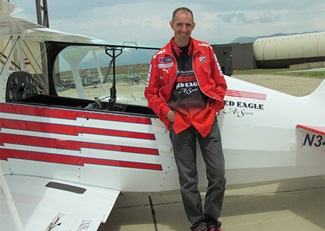 The engine just quit, without so much as a sputter of warning, and Maj. Billy Werth found himself in a pickle over southern Maine.

The veteran airshow performer and U.S. Air Force Reserve tanker pilot recalled his initial reaction to the Aug. 10 engine-out in a telephone interview with AOPA: “It acted like it ran out of gas,” Werth said. “My first thought is, how could I have possibly screwed this up and run myself out of gas?”

Werth was flying in loose formation with Bill Gordon, with whom he had just finished a performance of the Iron Eagle Aerobatic Team at the Acadian Heritage Air Show in Frenchville, Maine. They were cruising about 4,500 feet. Werth shook off his disbelief in a couple of seconds, pitched for best glide, and started troubleshooting, letting Gordon know there was a problem. Werth’s highly modified Christen Eagle is an agile airplane, but not the best glider—biplanes produce a lot of drag. Werth said he gave himself just 20 or 30 seconds to play with throttle, mixture, mags, and fuel pump before turning his attention to suitable landing spots.

Gordon was meanwhile using GPS to find the closest airport, which turned out to be six miles away. Too far in a powerless Eagle that had 4,500 feet to start with. There were clearings below, but they were remote and surrounded by thick woods, not an ideal location because rescue, if needed, could take some time. There was also a two lane road (which turned out to be Route 35).

“I’ve always been a proponent of roads anyway,” Werth said, noting that he teaches students to consider them in such emergencies. “It’s a big long runway that just happens to have cars on it.”

Traffic is always a consideration, and Werth said landing with the flow of traffic is key. One downside of landing on a road is they are often accompanied by power lines, and Werth noticed that power lines actually crossed the road near his aim point. There was also some traffic—three cars and a motorcycle, and Werth knew they’d be very unlikely to see him coming. An inconveniently located tree offered an additional challenge.

Werth said he had just enough energy to clear the power lines, though he clipped a telephone wire (a fact he did not learn until later), ducked under the tree (also clipping some foliage), and started to flare, making sure he carried past the vehicles below.

“Then it just kind of ran out of airspeed,” Werth recalled. The stall, at about 15 feet off the ground, made for a hard landing, buckling the landing gear. Werth slid off the side of the road and came to a stop in a ditch. One of the passing vehicles he had taken pains to avoid stopped to help, a couple rushing to assist Werth, one of whom happened to be a pilot. The passerby helped Werth get clear of his damaged aircraft, then retrieve a handheld radio to let Gordon know he was alive and well.

Werth was nearly uninjured, though not quite. He suffered a cut to this hand, which required two stitches and resulted from gripping the throttle (which also housed the push-to-talk switch and broke in half on impact). Werth said his first concern had been to avoid hurting anyone on the ground, his second to avoid hurting himself, and his third priority had been to avoid damaging the airplane.

After flying since 1988 (and a military pilot since 1997), Aug. 10 was the first time Werth had ever lost all of his engines at once (he previously lost one of four engines on a KC-135 mission, landing without further trouble). Werth said complacency may have set in, to a degree, during all those hours without engine trouble, and he will pay more attention to his potential landing options during future cross-country flights.

“I wasn’t expecting anything,” Werth said. “Of course, I’m Monday morning quarterbacking myself.”

Werth teaches upset recovery and aerobatics in Indiana, (and offered lessons prior to and a demonstration during the AOPA Fly-In in Indianapolis this year), along with emergency procedures and scenarios such as loss of power on takeoff. He said there is no substitute for practice when it comes to coping with emergencies. His extensive experience with low-level flying was also an asset as he closed in on the narrow road surrounded by trees, though simulated emergencies are valuable even at altitude, no matter how long a pilot has been flying.

“The more you practice it, the more natural it becomes,” Werth said.