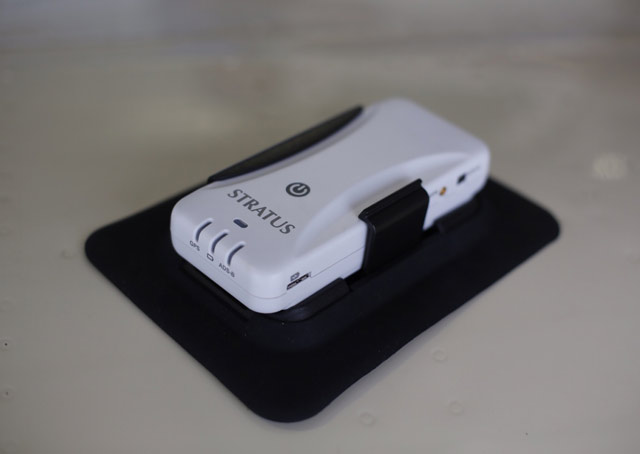 While this is a long-term review of the Stratus 2 ADS-B receiver, we could have written it after just one flight—that’s how simple the product is to use. We’ve flown with the sleek white receiver on the glareshield of my Bonanza for several months and found it to be amazingly reliable and easy. Turn it on and before you’ve started the engine and taxied away, it has connected to the ForeFlight iPad electronic flight bag and begun downloading the latest ADS-B weather.

We’re fortunate to have one of the 400 towers that nationally broadcast ADS-B weather and traffic information on our home field of Frederick, Maryland, so your mileage may vary on time to load weather data. Some report having to climb to about 2,000 feet agl to get line of sight with a tower to begin receiving data—true of any ADS-B receiver. 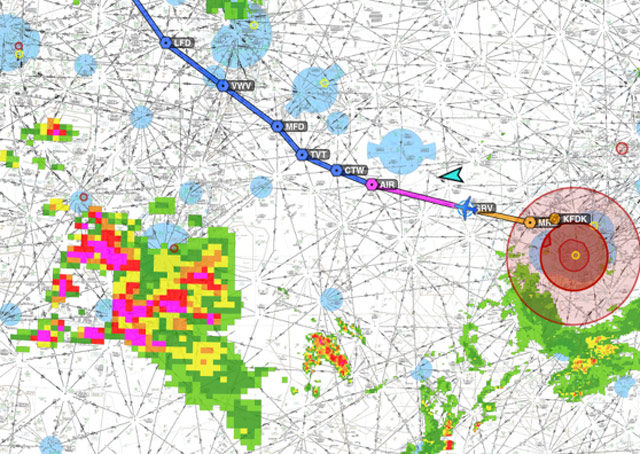 Stratus 2 is a partnership among manufacturer Appareo, Sporty’s Pilot Shop, and ForeFlight. Because Stratus 2 was built with ForeFlight in mind, the level of integration is slick and complete. However, that partnership also is the product’s Achilles’ heel. Unlike many other portable ADS-B receivers that support multiple applications, Stratus 2 only works with ForeFlight.

But for the many ForeFlight users out there, the Stratus 2 provides seamless access to ADS-B weather products, a WAAS GPS signal, and integration of the Horizon attitude indicator—more on that in a moment. Among the weather products streaming up from those 400 ground stations are a low-resolution national weather radar and a higher resolution regional radar (with images averaging about 5 minutes old—like most other datalink systems), METARs, TAFs, TFRs, airmets, sigmets, notams, pilot reports, and wind/temperatures aloft. The pilot has the ability turn on map data layers that show TFRs, radar, sigmets/airmets, and other content. Other weather products show up when looking at individual airport listings, accessed via the map or through dedicated ForeFlight menus.

In addition, Stratus 2 receives ADS-B traffic from the ground stations. If your airplane is ADS-B Out equipped (as our test airplane is), you will see all traffic around you, whether the targets are equipped with ADS-B Out, Mode S, or Mode C (assuming you are in a radar environment and within range of a ground tower). If your airplane is not ADS-B Out equipped, the traffic picture becomes less clear and, arguably, dangerous if you believe you are seeing all traffic, because you are not. In order to send up traffic information, the ground stations must be triggered by an ADS-B Out-equipped airplane. If you’re in the neighborhood of one, you may see the traffic positions sent up to the other airplane. And you may see other nearby ADS-B Out aircraft broadcasting their position, but you won’t necessarily see airplanes with only a Mode C transponder, for example. 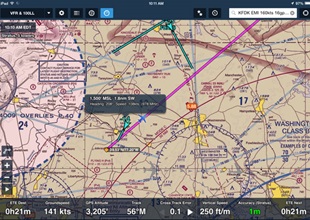 A tap on a traffic target shows details about it and its trend information relative to your position. Relative to our panel-mount ADS-B traffic display, we found the Stratus 2 traffic presentation to be mostly comparable, although the traffic positions tended to jump around more than what we saw with the Garmin GDL 88 panel-mount presentation.

Among the new features of the Stratus 2 compared to the original model is a connection to the Horizon attitude heading reference system (AHRS) app. Install the free Horizon app on your iPad and it then receives the AHRS information from the Stratus, providing an advisory attitude, airspeed, heading, and altitude presentation. The AHRS info can be viewed singularly in the Horizon app or, most conveniently, through ForeFlight where you can place it on a split screen with AHRS info on one side and EFB info on the other side. The AHRS needs an understanding of the Stratus 2’s position. It mostly figures out the correct attitude on its own, but it can be quickly calibrated in flight to tweak the position.

A frequent complaint with the original Stratus was that it would get too hot on the glareshield and shut down. With a built-in fan, Stratus 2 seems more immune to such problems. On a particularly warm day after several hours of use we received a message on the iPad that Stratus 2 was too hot and would soon shut down. We moved the unit from the glareshield to the shaded floor and it kept working, even receiving GPS and weather and traffic from that position. The WAAS GPS receiver in Stratus 2 is also an improvement over the original. The unit’s ability to provide position information obviates the need for any other external GPS receiver to support the iPad. Access to the WAAS GPS also allows use of ForeFlight’s Hazard Advisor feature, which shows high-resolution terrain and obstacle information on the moving map.

While Stratus 2 was introduced in 2013, new features added this year improve performance, especially when combined with the latest versions of ForeFlight. Among them is the ability to shut down the iPad when not needed to save battery life. When the iPad is awakened, Stratus 2 automatically sends any weather updates received while the iPad was asleep. Another new feature is the ability to animate the previous 30 minutes of national and regional radar images—a handy tool for tracking storm movements.

Stratus shares its information with the iPad via Wi-Fi; other ForeFlight systems in the airplane can tap into the Stratus feed. Once initially connected, the iPad instantly recognizes the Stratus Wi-Fi signal upon start up and connects automatically.

Appareo claims an eight-hour battery life; we’ve not taken it all the way to zero, but based on the long multi-leg flights we’ve made, that seems reasonable. You’ll likely run out of iPad battery before the Stratus 2 shuts down. The unit comes with a mini USB connector to charge either from a wall outlet or an onboard power source—12 or 28 volts, but a minimum of 2.1 amps is required. Firmware updates can be loaded via ForeFlight, so there’s never a need to connect Stratus to a computer.

Stratus 2 is available exclusively from Sporty’s Pilot Shop and sells for $899.

Contributor (former Editor in Chief)
Contributor and former AOPA Editor in Chief Tom Haines joined AOPA in 1988. He owns and flies a Beechcraft A36 Bonanza. Since soloing at 16 and earning a private pilot certificate at 17, he has flown more than 100 models of general aviation airplanes.
Go to Thomas B Haines's Profile
Topics: Gear, Avionics, FAA Information and Services