Get the app Get the app
Already a member? Please login below for an enhanced experience. Not a member? Join today
News & Media Training Tip: All available resources

A student pilot and flight instructor are established in cruise on the outbound leg of a dual cross-country. Now departure control is calling to terminate radar service, the controller advising the flight, "Squawk 1200, frequency change approved."

A variety of experiences raises a pilot trainee’s confidence level, so today’s destination is much unlike the bustling airport in Class C airspace to which they flew for the previous lesson. Today’s destination, a grass strip far from congested airspace, is a popular port of call for local general aviation pilots because of its back-to-basics character.

Well, there is a bit more to it than that (in case the designated examiner for your checkride should happen to inquire). The trainer is well equipped with avionics; use what’s still available to maintain your situational awareness.

Along the course, for example, are numerous nontowered airports. Tuning in to the common traffic advisory frequency of the nearest one, two miles east, the student and instructor soon hear a pilot announce a westbound departure.

"Let’s keep a lookout for that Cessna."

According to the sectional chart, the next airport along the route has an automated weather reporting system. The student enters the frequency into the radio’s stand-by position, making it conveniently available for checking local conditions such as the local altimeter setting and surface winds.

The aircraft’s number two radio is also sitting idle. Monitoring the emergency frequency, 121.5 MHz, is encouraged and could make you the first party to pick up a distress call, or the signal from an activated emergency locator transmitter.

The radio also has a stand-by frequency feature. Setting it to Flight Watch, or a remote communications outlet shown on the chart could save you time establishing communications later. It also offers an outlet for filing a pilot report about your flight conditions.

"Is all this really necessary?" the student wonders—then suddenly spots the reported westbound Cessna, less than a mile ahead. 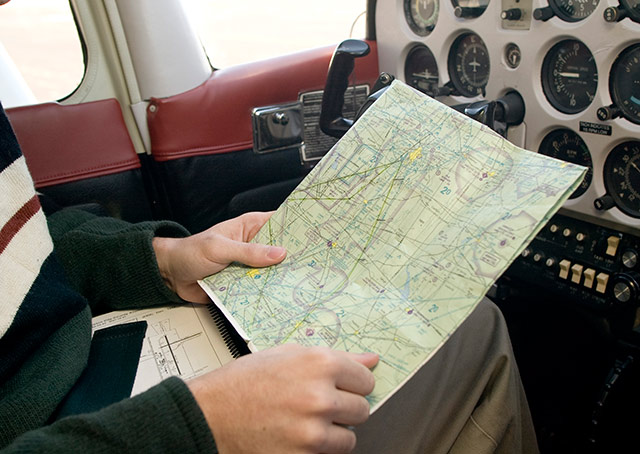