Get the app Get the app
Already a member? Please login below for an enhanced experience. Not a member? Join today
News & Media EAA chapter uses fly-in to help save Braden Airpark

As the fate of Braden Airpark in Easton, Pennsylvania, hangs in the balance, Experimental Aircraft Association Chapter 70 is hoping that the twentieth annual Biggest Little Fly-In on Sept. 7 will show the public how important the facility is to the community.

The Lehigh-Northampton Airport Authority is under a court judgment to pay $26 million after losing a case resulting from its having taken land from a developer, and was using the sale of Braden Airpark, appraised at about $3 million, as a way to raise money to help satisfy that judgment.

In April, the authority voted against a motion to close Braden Airpark on Oct. 19. It then formed an ad-hoc committee to work with airport supporters on plan to preserve the facility. A decision on the airport’s fate is due Sept. 15, said Ed Deacon, vice president of EAA Chapter 70 and one of the fly-in’s organizers. AOPA has been working in concert with local airport supporters to protect Braden Airpark and Queen City Airport, both owned by the authority, and both long-time targets for closure.

“We’re trying to sway public opinion and show why this place needs to stay open,” said Deacon. “EAA sponsors the Civil Air Patrol, the Boy Scouts, and we give more than 500 free rides a year under the Young Eagles program at Braden Airpark.”

The airpark helps support all these groups, which also support the community, said Deacon. “We do programs all year long. We also offer scholarships to attend EAA AirVenture and sponsor the Boy Scout aviation merit badge weekend,” he said.

EAA needs the airpark’s situation to be stabilized so it can do even more, said Deacon. “The reality is if the airport situation was stabilized, we could put up [a] new building with meeting rooms for all the aviation groups at the airport,” he said. “But we haven’t begun construction because we don’t know what’s going to happen to Braden Airpark.”

As a result, EAA is making a big deal about the Biggest Little Fly-In, said Deacon. “We want the public to see that this is not a dead issue, and we also want them to see that there’s a lot of history here,” he said. “If you use the airport, we want you to be there.”

The chapter made a big push to attract attendees at the Lehigh Valley Airshow, held Aug. 23 and 24 in Allentown, Pennsylvania, where EAA had a large display, said Deacon. “We’ve also started doing public service announcements on local radio stations, and there are posters for the event being hung at other airports in the state,” he said. “We also reached out to car clubs since we will have automobiles on display.”

Some of the event highlights include FAASTeam safety seminar; pancake breakfast, lunch, and pig roast/clam bake; display of classic and custom cars, along with aircraft; an RC airshow; flea market with 15 vendors; and three bands. “Any pilot that flies into Braden Airpark for the event gets a free lunch,” said Deacon.

More than 400 people attended the event last year, said Deacon. “We expect even more to attend this year, thanks to heavy advertising,” he said. 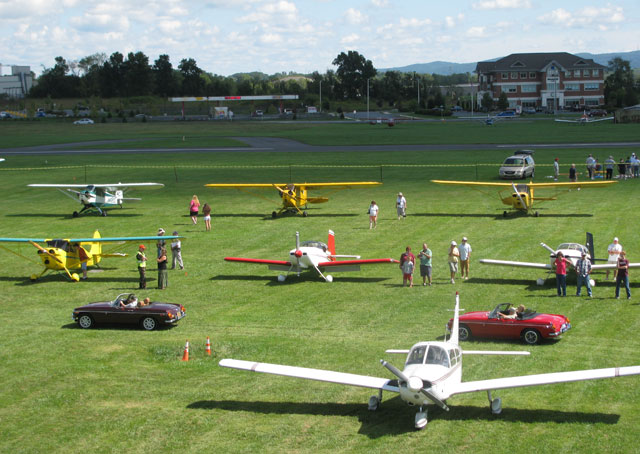