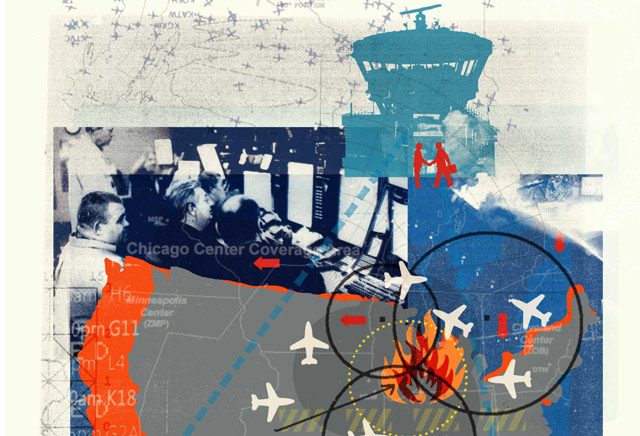 In the basement of the Chicago Air Route Air Traffic Control Center in Aurora, Illinois, shortly after 5 a.m. on September 26, investigators say Brian Howard—a contract employee—severed the main lines of the vast communications network that underpins some of the world’s busiest and most complex airspace, set fire to the electronics, and then slashed his own wrists and neck. He also posted a suicide note on social media.

Howard would survive, but the technological heart of the Chicago air traffic control system was dealt a fatal blow.

A 911 call at 5:40 a.m., followed by fire alarms, forced all employees, including about 140 controllers, to evacuate the FAA facility in suburban Chicago. They had just directed a wave of eastbound red-eye flights high overhead and were prepared to handle a surge of arrivals to O’Hare and Midway, Chicago’s busiest airports.

Within minutes, however, FAA managers had declared an “ATC Zero” situation, meaning that the entire facility was dropping offline. About 40 airplanes on IFR flight plans were over the area when the outage began, and pilots scrambled to reach other air traffic controllers on the emergency frequency, 121.5 MHz. From a timing standpoint, the traffic level was extremely low, but the Friday wave of preweekend travel already was rolling and would crest that afternoon.

Outside the brick and steel FAA building, controllers gathered in a parking lot at dawn. Black smoke billowed from the ground floor of the facility. As firefighters and police noisily swarmed the area, controllers used personal cellphones to call and text their peers at other facilities and let them know what was taking place.

Details about what had started the conflagration also began to emerge. Howard, a contract employee for eight years, knew the communications network and its vulnerabilities. Days later, he would be charged in U.S. District Court with destruction of aircraft facilities, a federal crime with a maximum penalty of 20 years in prison.

For controllers, few of whom knew Howard personally, the most urgent questions had to do with fixing the compromised national air traffic system. A gaping 91,000-square-mile hole had been torn in the center of that network. American, Southwest, and United airlines—all with hubs in Chicago—felt the brunt of the impact, with Southwest canceling all its Midway flights. Thousands of general aviation flights were halted, too. Early estimates predicted it would take many weeks, possibly months, to repair the damaged nerve center. 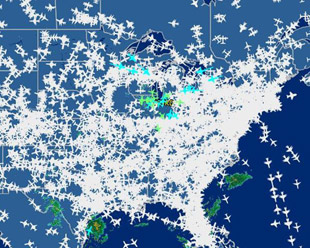 Around noon, police with bomb-sniffing dogs cleared the Chicago Center building, and controllers and FAA managers went back inside. The fire had largely been contained to the basement, but the damage to the communications network was extensive.

FAA managers, technicians, and controllers sketched out a plan for getting air traffic moving again, although at a vastly reduced rate. Chicago Tracon, the approach control facility, was still at full strength. With a redrawn air traffic map, different radio frequencies, and new procedures, the surrounding air route traffic control centers could reach deeply into Chicago Center’s territory and, in some cases, coordinate arrivals and departures directly with the tracon.

“The situation was so unusual and so complex that, in the beginning, we didn’t really know what kind of help to ask for,” Hall said of the tracon. “Everything had to be done manually and coordinated by phone.”

Over the next 24 hours, about 220 Chicago Center controllers dispersed themselves to other centers as well as smaller ATC facilities—such as South Bend, Indiana; Milwaukee, Wisconsin; and Moline and Rockford, Illinois—which took over more airspace, higher altitudes, and quadruple their normal traffic volumes. Chicago controllers who had previous experience at regional facilities returned to them so that they could be recertified quickly at familiar locations.

“There have been tornadoes and other events that have caused ATC Zero situations before,” Hauck said. “But they typically last for minutes or a few hours. The situation we were facing with Chicago being out was unprecedented. We were in uncharted territory.”

“We got out a map and started hand-drawing lines on it,” said Aaron Merrick a 15-year Kansas City Center controller. “We had some seldom-used radio frequencies that helped extend our range.”

Even though some of the 20 or so Chicago Center controllers and FAA managers who showed up at Kansas City Center were assigned to familiar airspace, many of the procedures and frequencies had changed. Surrounding centers were directing a surge of high-altitude traffic that normally would have gone over Chicago, and ripple effects spread across the continent. Jets coming into Atlanta from the west, for example, were told to fly at far lower altitudes than usual for hundreds of miles because the airspace above them was jammed.

Several radar positions at Kansas City that normally are used only at peak hours were pressed into full-time service, and both Chicago and Kansas City controllers worked side by side.

“The Chicago controllers blended right in, and the collaboration worked better than anyone could have expected,” Merrick said. “In fact, I’ve never seen anything like it. We’re constantly short of staffing, and now we had three entirely new sectors and an entirely new set of procedures. But the teamwork was so phenomenal that we were able to overcome the obstacles. I’ve never been so proud to be a controller.”

At Chicago Center, technical experts determined it would be quicker to replace the damaged network with entirely new equipment than try to repair it—work continued around the clock for two weeks. Surprisingly, given the complexity of the project, the new network was in place on October 13, 2014, just 17 days after the fire.

Hauck and Merrick said they and their fellow controllers were so focused on solving problems during the shutdown that there was almost no discussion of Howard, the man accused of setting the fire, or his motivation. News reports said he was upset about an impending job transfer to Honolulu.

“No one really asked about the guy that did this or what his reasons might have been,” Merrick said. “We’re professionals who came together to fix a very big mess, and we all take great pride in what we were able to accomplish.”

Hall, of the Chicago Tracon, compared the controllers’ reaction to the citizens of Boston following the 2013 marathon bombing. “The Boston bombing brought people together, and that’s what this event did for us,” he said. “Everyone stepped up. We did whatever needed to be done.”

The regulations for pilots in cases of lost communication with air traffic control in flight (FAR 91.185) generally assume it’s the airplane—not the ATC facility—that’s having radio difficulties.

But the “ATC Zero” situation at Chicago Center shows the same practices can help in case of a widespread ATC radio outage.

For pilots on IFR flight plans, radio failure is a contingency built into the planning for each flight. Pilots in IMC should use their transponders to squawk 7600 and continue on their assigned route at their last altitude, the expected cruise altitude, or the minimum en route altitude, whichever is highest. If pilots on IFR flight plans encounter clear weather, they should land as soon as practical, but that doesn’t mean they must land immediately.

On September 26, 2014, the date of the Chicago Center fire, pilots on IFR flight plans reported no trouble reaching other ATC facilities, some of them by broadcasting on 121.5. That emergency frequency is monitored by air traffic controllers throughout the country as well as airliners in flight. Also, on that morning, the fact that pilots could still hear and talk to each other on their assigned radio frequencies let them know right away that the communications problem was on the ground, and not with their individual aircraft radios.

At ATC towers, controllers have their own methods of assisting pilots with failed radios. At towers equipped with radar, controllers might ask a pilot to press the transponder IDENT button if to acknowledge that they can receive radio transmissions, then and clear them to land using the IDENT button to confirm that they hear, understand, and can comply with ATC instructions. If the radio failure (or electrical power loss) is total, pilots should enter the traffic pattern and look for a light signal from the tower.

From Brian Howard’s Facebook page: “Take a hard look at the mirror, I have. And this is why I am about to take out... and my life... I am sorry. Leaving you with a big mess. Do your best to move on quickly from me please. Feel like I give a @$*& for the first time in a long time again... but not for too long (haha!) So I’m gonna smoke this blunt and move on, take care everyone.”