Get the app Get the app
AOPA Members DO more LEARN more SAVE more - Get MORE out of being a pilot - CLICK HERE
News & Media Pilots: Gene Engledow, 101-year-old-pilot

Still flying at the century mark

Eugene Engledow parks his van in front of his hangar and hops out to show us his airplane. 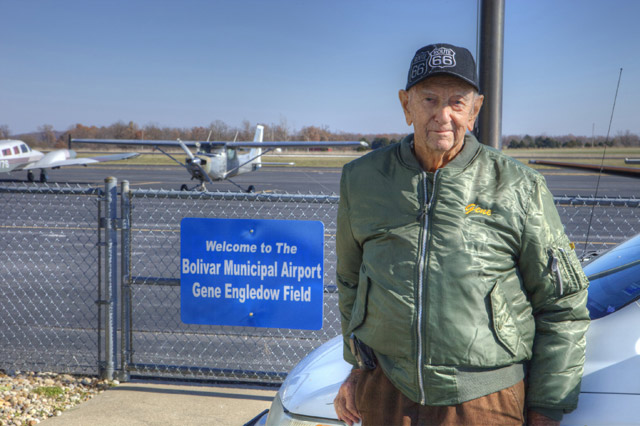 Extra | “During the war, we were told we had a rush modification job requiring around-the-clock work on eight B–25s, taking out all unnecessary equipment and installing extra tanks. As it turned out, they were part of the Doolittle Raid, and after the war I met Jimmy Doolittle out at Pancho Barnes’ place, where he thanked me and signed my pilot’s license.”

Eugene Engledow parks his van in front of his hangar and hops out to show us his airplane. He could be taken for a retiree in his 70s, but, amazingly, Engledow was born October 7, 1913. He doesn’t wear glasses, his memory’s sharp, and he only wears hearing aids because of years spent working around jet and rocket engines.

His 1946 Aeronca Chief is immaculate. “I made five landings in her on my 100th birthday,” he says. No, he didn’t have a safety pilot on board, and his flight review is current. For now, he only flies as a sport pilot, although his medical examiner says he could pass the third class physical.

Now living in Bolivar, Missouri, Engledow grew up as a Midwestern farm kid watching airplanes. A natural mechanic, he moved to California in 1936, finding work with a Ford dealer in Oxnard. Santa Paula Airport was nearby, and he began taking lessons in a 38-horsepower Aeronca C–3. Because the operator wouldn’t let students solo the unreliable single-ignition C–3, his solo was in a Piper J–2 Cub.

In 1940, Cal-Aero began operating a civilian pilot training school at Oxnard and needed aircraft mechanics, so Engledow hired on, becoming an A&P. In 1941 the attack on Pearl Harbor put the country at war. When a Vultee BT-13 flew into Oxnard, the pilots told Engledow about an Army Air Forces support facility hiring civil-service mechanics at Gardner Field, near Bakersfield. Engledow quickly joined the 305th Sub-Depot unit and applied his skills to military aircraft.

Engledow operated Kern County Airport at Taft, California, where he was a dealer for Swift airplanes. He returned to Missouri, working at a General Motors plant in Kansas City that built Republic F–84F jet fighters. He then worked on Boeing B–47s at Whiteman Air Force Base, and eventually wound up in 1957 at Boeing’s Rocketdyne subsidiary in Neosho, Missouri, where many of the rocket engines for the space program were developed.

Engledow commuted to work in Swifts, Luscombes, and Aeroncas. He became the Neosho airport operator, as Engledow Aviation. After retirement in 1975, he and his wife Grace settled down in Bolivar.

He holds both the Charles Taylor Master Mechanic award for 50 years of violation-free maintenance and the Wright Brothers Master Pilot certificate for a half-century of accident-free flying. The Bolivar Airport is named “Gene Engledow Field” and a parking spot in front of the airport restaurant is reserved for “100-Year-Old Pilots.”