Get the app Get the app
Already a member? Please login below for an enhanced experience. Not a member? Join today
News & Media Quick Look: Turbine Bonanza conversions

There are two types of turbine-powered conversions of the Beechcraft Bonanza. 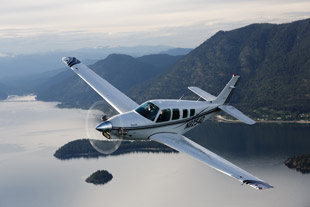 There are two types of turbine-powered conversions of the Beechcraft Bonanza. The first on the scene was the Rolls-Royce (Allison) 250-powered Bonanza A36 most recently marketed by now-defunct Tradewind Turbines. Utilizing a repurposed helicopter engine (Allison 250s powered the ubiquitous Bell 206 JetRanger), the Tradewinds Bonanza arrived in the mid 1980s in a collaborative effort between Allison and Soloy Conversions. The Allison engine cranks out 420 shaft horsepower and provides a huge bump in performance for the A36, which was originally equipped with 285- or 300-horsepower Continental piston engines. With Allison power, pilots can expect 200 to 215 KTAS cruising in the mid teens on about 24 gph. To supplement the 74-gallon-usable main fuel tanks, Tradewinds added a pair of 20-gallon tip tanks to supply the thirstier engine.

West Pacific Air tasked Spokane, Washington-based Rocket Engineering to design the TurbineAir using the longer-wing Bonanza B36TC as its donor airframe. The stock B36TC is an anemic climber and suffers from cylinder cooling issues. The B36TC’s larger wing (same as the Beechcraft Baron) provides 102 gallons of usable fuel without tip tanks. Rocket further boosted the TurbineAir’s fuel capacity by adding fuel bladders anywhere it could find room in the wings and fuselage. Total capacity is 124 gallons.

Both airplanes’ big limitation is lack of pressurization. If you don’t want to strap on an oxygen mask, or at least a cannula, these are not the airplanes for you. Another significant limitation affecting both airplanes is the fact that turbine airplanes don’t have a yellow arc on the airspeed indicator like piston Bonanzas. Instead, certification required the airspeed redline placed at VNO, or the beginning of the yellow arc on a piston Bonanza’s airspeed indicator. That’s around 165 KIAS, depending on conversion. With their abundance of power, both airplanes are bucking against their respective redlines at lower altitudes.

Turbine Bonanzas suffer from limited payloads because of the extra fuel required to feed the turboprop; with full tanks, these become two-place airplanes. On the plus side, the turbine-powered Bonanzas provide safety, reliability, and performance. And where avgas is becoming prohibitively expensive, or scarce, the ability to burn Jet-A makes a lot of sense.

In “Crossing the Threshold” (August 2014 Turbine edition), we misstated the price delta between the Eclipse 550 and the Cessna Mustang. Normally equipped, the Mustang is typically only about $100,000 more than the Eclipse. Pilot regrets the error. —Ed.