Get the app Get the app
AOPA will be closed July 4th, in observance of the Independence Day holiday. We will reopen at 8:30 am ET on Tuesday, July 5.
News & Media Pilot Briefing: Milestones 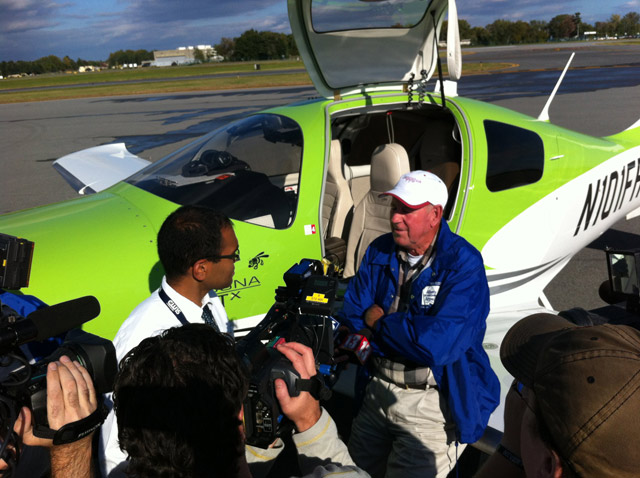 Throughout the history of flight, pilots have always been up for a good challenge—one that will test both their airmanship and their airplane, and provide some excitement along the route as well. Such was the case of the Capital Air Tour, an impressive and complicated trip completed last September by pilots Field Morey and Conrad Teitell. 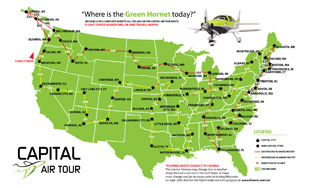 The trip’s 57 legs started with the requirement of a demanding “adventure flight” to take Morey’s 2013 Cessna Corvalis TTx to all the U.S. state capitals in the lower 48 and Alaska. While flight planning for the Capital Air Tour, it struck the pilots that, as staunch advocates for general aviation, they would be staying overnight in 14 cities where they could create opportunities with local media to talk up general aviation. Two clear objectives—the benefits of smaller GA airports and the technology found in modern GA airplanes—were identified that would provide a focused message when TV and newspaper reporters were listening.

Morey, 75, is a CFI and ATP based at Rogue Valley International Airport in Medford, Oregon, and has been an FAA designated pilot examiner for 38 years. He’s received the FAA’s Wright Brothers Master Pilot Award and, in 2004, was inducted into the EAA Aviation Hall of Fame. He’ll tell you that with 35,000-plus hours, he’s been “off the Earth” a total of four years—many of them flying IFR adventure flights for his company, Morey’s West Coast Adventures.

It was on one of those flights that Morey met Teitell, 81, an attorney and private pilot from Greenwich, Connecticut, who flies out of New York’s Westchester County Airport. After earning his instrument rating on one of Morey’s IFR adventure flights, Teitell formed a strong bond with Morey, and the two started planning something bigger.

“When Field told me that he was taking delivery of the Corvalis TTx,” Teitell said, “I immediately said we should fly it to all the states in the lower 48 plus Alaska. Without a nanosecond’s hesitation, he agreed, but said we should do it in 14 days. We would have also included Hawaii, but we couldn’t locate any FBOs in the Pacific Ocean.”

From the time they departed Medford, Morey and Teitell were general aviation representatives, passing out printed materials from AOPA as they invited local media reporters into their GA world. The result was a wave of coverage in daily papers and on the evening news—all positive stories showing a side of GA the public rarely sees.

“At every opportunity on the tour,” Morey said, “I would tell of my personal experience of turning a 160-acre cow pasture into the airport my family founded, Morey Field in Middleton, Wisconsin. Every media report that I viewed or read included the fact that our tour was promoting GA airports and talked about the financial contributions these airports make to their local economies.”

“We had enthusiastic newspaper and TV coverage,” Teitell said, “and the excitement extended to the FBOs, airport managers—even air traffic controllers, who asked if we were the two guys flying to 49 states in 14 days.”

A hit at each media stop was Morey’s Corvalis TTx, known as the Green Hornet because of its lime-green factory paint scheme. “When I would fire up the Garmin G2000’s big screens on the glass panel, the cameras would roll every time,” he said.

The speed and altitude capability of the airplane were critical to the mission. “The TTx has an advertised top cruise speed of 235 knots at 25,000 feet,” Morey said, “but we averaged 167 knots for the 12,560 nautical miles of our tour, with most legs flown at 12,000 to 13,000 feet. We operated at 65-percent power running 50 degrees lean of peak, burning 16.7 gallons per hour, yielding exactly 10 miles per gallon—with tailwinds and blue skies for the majority of our trip.”

Some elementary school teachers used the Capital Air Tour to teach students about time, distances, geography, and the U.S. state capitals. Teachers such as Elizabeth Bandow, a first grade teacher in Boise, Idaho, used the Spot real-time tracking map online each day to follow the trip. “We would look at the map at various times during the day to see the Green Hornet’s new location,” Bandow said. “The kids were locating the states on the map and reading about each state the Capital Air Tour visited. I have a friend who teaches fifth grade, and she did more involved mathematics such as calculating distances. It has been fun to see my students’ understanding of our country expand.”

The logistics of the mission were challenging. “The initial flight plan was easy,” Morey said. “Head north from Medford to Alaska, then back to the lower 48, working our way east along the northern states. The overnight stops were laid out based on trying to keep our daily flight time to a maximum of seven hours, with an hour of time on the ground at each stop.

“It will go down in my memory as the Great Adventure,” Morey said. “The high point for me was returning to my home airport in Medford, and taxiing in between two fire trucks spreading an arch of water that reflected a rainbow above us to highlight a wonderful finish to our tour.”

Dan Pimentel is an aviation writer based in Oregon. His wife, Julie, runs the public relations firm used by the pilots of the Capital Air Tour.