Get the app Get the app
AOPA will be closed July 4th, in observance of the Independence Day holiday. We will reopen at 8:30 am ET on Tuesday, July 5.
News & Media Pilot Briefing: 2015 Sweepstakes

Larry Hill’s face lights up as a slight tug on N152UC’s yoke causes the AOPA Sweepstakes 152 airplane to ease off the ground and into the air at AOPA’s home base in Frederick, Maryland. 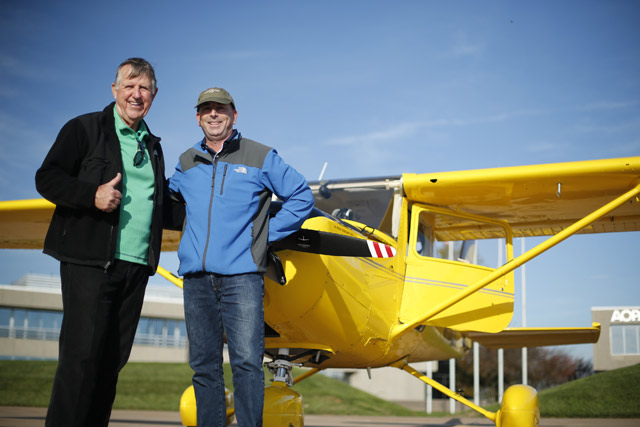 Sweepstakes 152 gets rusty pilot back in the air

Larry Hill’s face lights up as a slight tug on N152UC’s yoke causes the AOPA Sweepstakes 152 airplane to ease off the ground and into the air at AOPA’s home base in Frederick, Maryland.

It’s the first time Hill, 75, has flown a general aviation aircraft since 1967, when he soloed a very similar Cessna 150 at Hyde Airport in Washington, D.C. “The thrill of getting into the air and entering that whole new world hasn’t changed at all,” said Hill, a retired landscape architect whose interest in flying never waned during the nearly five decades since his initial solo. “It’s exactly as I remember it.”

Hill attended an AOPA Rusty Pilot seminar at AOPA’s seventy-fifth anniversary Homecoming Fly-In and was invited for a flight in the 2015 Sweepstakes 152.

In the days leading up to the reintroduction flight, he reviewed the 152’s pilot operating handbook and checklists. On the morning of his flight, Hill had done his homework and was familiar with the aircraft and its panel; he had memorized the speeds for rotation, best rate of climb, and approach—but the Garmin aera 560 touchscreen GPS was novel.

“The Cessna 150 that I learned to fly in had a compass and a clock, and that was about it for navigation,” he said. “I spent a lot of time following roads, being worried about getting lost, and a couple of times actually getting lost. It’s a lot easier to follow that magenta line [on the GPS] than follow railroad tracks.”

The yellowing pages in Hill’s logbook recounted a series of flights in the spring and summer of 1967, all signed by CFI W. Blanchard, a woman Hill remembers fondly. “She was married to an Air Force colonel and he taught her to fly in the style that he had learned, which is to say fanatically overbearing and dictatorial,” Hill said. “She became an instructor because she knew there was a better way to teach. She was patient and kind and very relaxed, and that was just perfect for me.”

Hill was a Navy diver at the time and had long been interested in flying. As a boy growing up in Southern California, his stepfather had taken him flying in a Piper J–3 Cub in 1948. They flew from Los Angeles up the coastline over Malibu and landed at Santa Paula.

Hill was making steady progress toward a license in 1967 when “life intervened.” He married a kindergarten teacher named Donna, enrolled in graduate school, moved with his family to a job assignment in Europe, and then adopted children. Hill’s schedule wasn’t just full, it was overflowing.

“I never lost my desire to fly,” he said. “But I knew that I wanted to fly a lot and get really good at it, or not do it at all. And circumstances were such that it was clear that I wouldn’t be able to fly enough to really master it and stay proficient at it.”

Now in retirement, Hill said the time may be right to get back into flying in a purposeful way. “Donna is very encouraging,” he said. “I’m not sure I’ll ever to get her to fly with me, but throughout our 47 years of marriage she’s always been totally supportive and encouraging.”

Hill said he’s also impressed with AOPA’s Rusty Pilots program. “There are lots of people like me who really love flying and are looking for a way to reconnect with it,” he said. “I so appreciate AOPA showing me how to get back into the air. It’s a whole new world.”