Get the app Get the app
Already a member? Please login below for an enhanced experience. Not a member? Join today
News & Videos Test Pilot 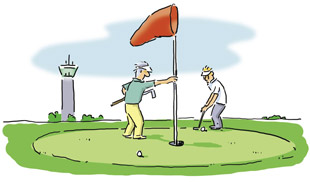 1. True or false: There were no female fighter aces during World War II.

2. What was probably the most unconventional means by which a fighter pilot attacked and downed an enemy aircraft?

3. What is so unique about the Don Muang International Airport serving Bangkok, Thailand?

4. A pilot enters and maintains a prolonged 45-degree banked turn while also maintaining a constant airspeed and altitude in a typical light airplane. After some period of time, the conventional air-driven attitude indicator will

b. continue to indicate a 45-degree bank angle.

d. gradually precess in either direction.

6. A fire truck pulls alongside and in front of a taxiing airplane that had just made an emergency landing. A firefighter steps off the truck and makes a beckoning movement with his left hand and arm. What should the pilot do?

7. From reader John Schmidt: What famous American corporation is named after the aircraft carrier from which this company’s founder flew Grumman F6F Hellcats during World War II?

2. A Russian World War I ace, Staff Capt. Alexander Kazabov, trailed a grappling hook on a long rope and used it to attack and destroy German aircraft.

3. Situated smack dab between the two parallel runways is an 18-hole golf course. Like the rabbits that dwell between Runways 25L and 25R at Los Angeles, the golfers there must be stone deaf.

4. c) The erecting mechanism of the gyro very slowly reacts to the apparent force of gravity (which, in a turn, is perpendicular to the lateral axis of the airplane) and gradually reduces the indicated bank angle. This error is eliminated shortly after the pilot rolls out of the turn.

5. Fuji Heavy Industries of Japan, maker of Subaru automobiles, produced the Fuji FA-200 Aero Subaru. It was certified in the United States in 1967, and 275 units were manufactured.

6. This signal means that aircraft evacuation is recommended, probably because the firefighter has detected a hazardous condition. This and other important firefighting and rescue instructions for pilots are shown in the Aeronautical Information Manual.