Get the app Get the app
AOPA will be closed July 4th, in observance of the Independence Day holiday. We will reopen at 8:30 am ET on Tuesday, July 5.
News & Media P&E Technique: Think like a ratchet

A tool for tailwheel landings

As a glider pilot I’d been taught that when flaring to land, if I overdid it a bit, to move the stick forward just enough to allow the airplane to resume level flight. 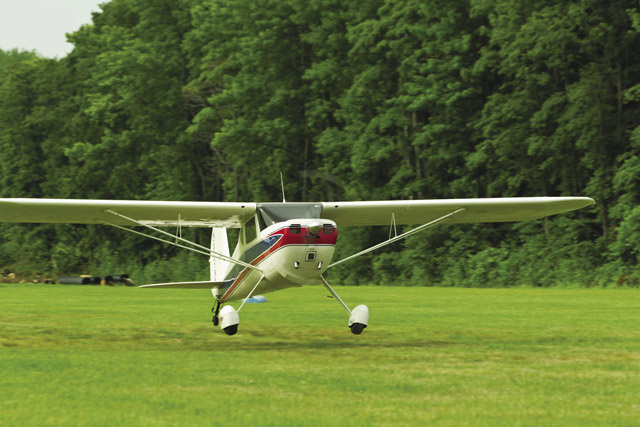 As a glider pilot I’d been taught that when flaring to land, if I overdid it a bit, to move the stick forward just enough to allow the airplane to resume level flight. Then, wait until it starts to descend once again before adding back pressure to “keep it off the ground.” This technique worked great in the gliders, as well as the forgiving nosewheel Cessna 152s and Piper Cherokees in which I earned my power certificate.

The method failed me when I transitioned to tailwheel flying in a beautifully restored 1946 Piper J–3 Cub. Fortunately, I was training with Damian DelGaizo at Andover Flight Academy in New Jersey, about an hour’s drive west of New York City.

Pilots come to Andover from all over the country to train with DelGaizo, who has specialized in teaching the vagaries of taildraggers for 27 years and earned an unparalleled reputation as a meticulous instructor.

DelGaizo’s standard technique for landing a taildragger sounds fairly simple, but it turned out to be a challenge for me. “After flying a nice stabilized approach, level out at the height of a man and hold it there until the airplane begins to descend,” he explained. “Then, start to apply back pressure on the stick to hold it off. Keep holding it off, applying more back pressure as needed until the control stick is full back and your tires kiss the grass.” Sounds simple, right? But “holding it off” is where my troubles began. I’d often think that I’d raised the nose too high and, not wanting to drop it on, instinctively move the stick forward to what I thought was a neutral position.

It turns out I really was just pitching the nose up and down as the Cub continued on its descending glidepath. I didn’t quite develop pilot-induced oscillations—something I’ve seen glider pilots experience—but I wasn’t letting the airplane settle gracefully to the ground, using a smooth and appropriate amount of back stick, either.

So, DelGaizo pulled the “ratchet method” out of his instructing toolbox to get me out of the habit. Before the next lesson he told me, “Think of the control stick as if it’s a ratchet wrench that can only move one way. After you level out at the height of a man and the plane begins to descend, you can only pull the stick back or hold it still. No moving forward to a neutral position. When you pull back, hold it there until the airplane starts to descend again, then pull back more and hold it there again. Do this all the way to the ground. You should end up with the stick full back to the stops and with a perfect three-point landing. Try to land on the tailwheel, but don’t worry, that’s almost impossible to do.”

It worked. That landing was much better, and my technique has improved with each successive landing while continually thinking of the control stick as a ratchet wrench. “Pull back or hold only. No moving forward,” is my mantra.

As with every rule, there is an exception. “If you’ve really yanked back too hard and the nose is pointing at the sky, it’s time to go around,” he says. Don’t try to save it. Fortunately, we never experienced that during my training.

This “ratchet wrench” way of thinking helped me begin making decent landings in the tricky tailwheel. It worked for me and my particular situation, and maybe it can help other tailwheel pilots with similar problems.

Of course, the real lesson here has nothing to do with how to land a tailwheel airplane. What’s most important is to find an innovative instructor, like DelGaizo, who will come up with an explanation—or or a different way of thinking about a problem—to ensure each student’s progress.

Aircraft available for training include the Piper J–3 Cub; a custom-built, 160-horsepower Super Cub with slotted wings for maximum performance; and a 1943 Boeing Stearman biplane for advanced tailwheel, aerobatic, and high-performance training. The only nosewheel on the flight line is a Cessna 172 Skyhawk that is used for some hours of primary instruction.

If you can’t come to him, DelGaizo can come to you—on DVD. His instructional DVDs, Tailwheel: 101, Tailwheel: 201, and Ski Flying: 101 are available from the Andover Flight Academy website or at Sporty’s Pilot Shop.