Get the app Get the app
AOPA Members DO more LEARN more SAVE more - Get MORE out of being a pilot - CLICK HERE
News & Media AOPA Fly-In 2014: From sea to shining sea

In an effort to increase member engagement, one of AOPA President Mark Baker’s first acts as the association’s new leader was to move away from one annual convention and instead host a series of regional fly-ins to “meet the members where they are.” 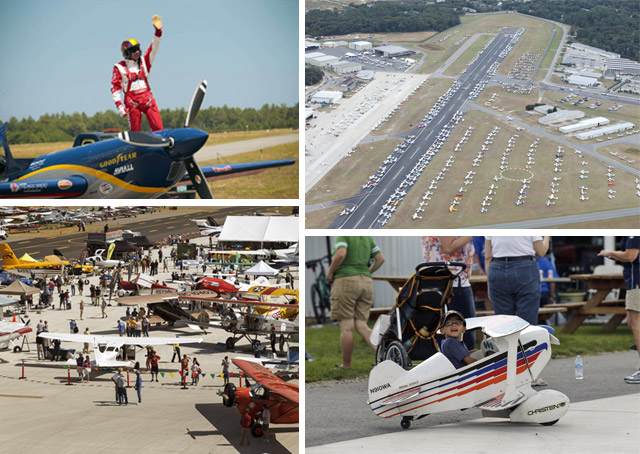 The great thing about the AOPA Summits and Expos over the years was the chance to catch up with members we’d met many times. On the other hand, we kept seeing those same few thousand welcoming faces over and over again as the show moved between its predictable venues on each coast. The vast majority of members could not afford the time or the money to travel to a three-day national convention.

One of the goals with the regional fly-ins was to meet more members and to do so near their home turf. Most impressive for me was how welcoming those members were. Without fail, members welcomed AOPA to their regions and many we spoke to said they had never been to an AOPA event before.

Best of all, many of those familiar members from Summit and Expo also came to one or more fly-ins. Great to see you all—new friends and old. See you again this year.

In an effort to increase member engagement, one of AOPA President Mark Baker’s first acts as the association’s new leader was to move away from one annual convention and instead host a series of regional fly-ins to “meet the members where they are.” After seven fly-ins—in locations from coast to coast—the statistics tell the story. More than 16,000 AOPA members met on a Saturday sometime in 2014 and enjoyed the camaraderie, aviation fun, and fantastic food offered up by the association.

“We are very, very pleased that we are speaking to new attendees,” Baker says. “Some 70 to 80 percent have never attended an AOPA event before.”

AOPA members also volunteered in droves to help out with the events. More than 1,600 volunteers manned the food stations, the flightlines, and the parking lots to help out their association. “We thought in a good first year we’d see 100 airplanes and 500 to 600 people in attendance at each venue,” Baker says. All seven fly-ins topped more than 2,000 visitors.

The association has received around 40 proposals from different airports across the country for the 2015 regional fly-ins. An announcement is planned for early January to reveal those special airports that will host this year’s events. Stay tuned! 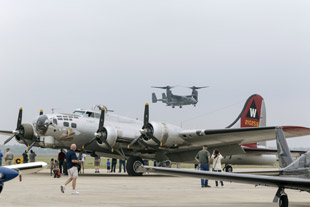 During the Friday setup at AOPA’s very first regional fly-in at San Marcos, Texas, I noticed a petite lady who had parked herself in the shade by the control tower with what appeared to be an easel. Irma Ward and her husband, Hugh, had driven down from Arlington for the fly-in. Hugh had purchased a ticket to ride in the EAA B–17 Aluminum Overcast, which was parked majestically on the ramp. Irma set up her easel to paint it for Hugh. He’s a pilot, and she worked for American Airlines for many years, so “aviation is in our blood,” she said. You can view more examples of her aviation paintings online. 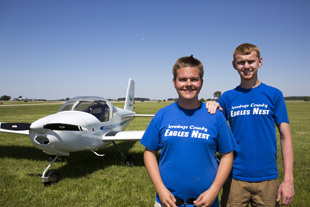 AOPA’s Indianapolis Fly-In, which debuted aircraft camping and aerial demonstrations at the grassroots events, embodied the spirit of general aviation. No one showcased that better than attendee Austin Malcomb (on left). The 17-year-old private pilot had a previous commitment the morning of the fly-in in a different part of Indiana, but made it to the event by lunchtime—thanks to GA. He hopped in the Experimental Van’s Aircraft RV–12 that he helped build through the Indiana-based Eagles Nest program and flew in with his father to meet his family and best friend. 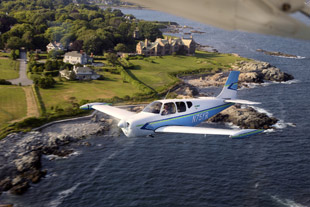 As I once lived in Massachusetts, it was a thrill to fly back along New England’s beautiful coastline in a Caravan on floats with the 2014 AOPA sweepstakes Debonair off our wing—and Plymouth couldn’t have been more welcoming. It truly is a quintessential New England airport and that Yankee spirit was in attendance. My favorite story was of Mary S. Build, who I met after she had flown her Piper PA–12 Super Cruiser on straight floats from Brandy Pond Seaplane Base in Maine into nearby Duxbury, landed on a friend’s pond, and was picked up by her friend Linda Cioffi from Albany, New York. The friendship and camaraderie in Plymouth was as inspiring as those green fir trees set against the perfect blue skies of New England. 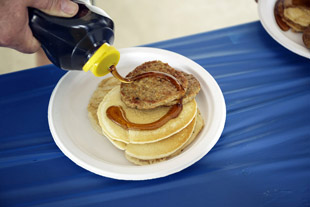 An amazing detail of AOPA’s regional fly-ins was the coordination of people, exhibits, airplanes, and food. Especially the food. Sean White, AOPA event planner, orchestrated the details of feeding everyone breakfast each morning and the provisioning was an amazing feat. At each town he coordinated the purchase of perishables from a local big-box store. In Spokane Marianne Hays, an AOPA medical specialist, and I volunteered to go pick up the sausage and orange juice for him. How hard could that be? We picked up 1,800 sausage patties and 40 gallons of orange juice. And then we had to get it all in the SUV. There was no chance of seeing out the rear of the vehicle, but we made it back to the airport without incident. Please don’t tell Sean I didn’t have my license with me. 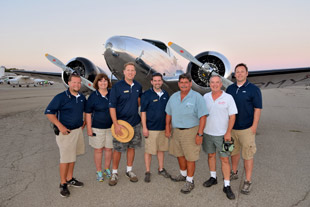 Unlike an AOPA Expo or Summit, association staff—and a cadre of volunteers—set up each fly-in the Friday before each event, from unloading trucks to positioning traffic cones to setting up chairs. At the Chino Fly-In, it was great to meet and work with fellow pilots from across the region. I really enjoyed the local flyings tips that the local volunteers shared, and learning about the myriad airports at which they are based. Even better, I now have inside information on at least three well-regarded airport restaurants I will try to visit in the future. My day concluded with a sunset flight in Yanks Air Museum’s Lockheed 12A Electra Jr., thanks to Matt Walker and Frank Wright. We touched down on Chino’s Runway 8R—just as the sun dropped below the horizon in front of us. It was a magical experience. 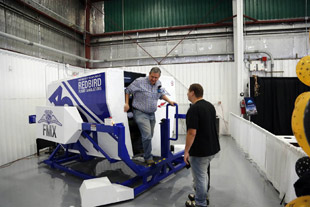 Enthusiasm for AOPA’s seventy-fifth anniversary and the return of a fly-in to the association’s home field drew more than 3,000 attendees to Frederick Municipal Airport in Maryland on October 4 for the AOPA Homecoming Fly-In. As early arrivals touched down under a 5,500-foot overcast, members of the local Civil Air Patrol wing shuttled buttermilk pancakes and sausages from the preparation area to hungry attendees. That’s where I met Sean Hopkins and Ace Williams, both 14, who picked up some volunteer hours before checking out the aircraft and exhibits—which included everything from an Extra 330SC to a B–17 Flying Fortress and a Redbird FMX simulator, donated by Jerry Gregoire and Redbird emplyees. “We are very excited about the flight simulator,” Hopkins said. 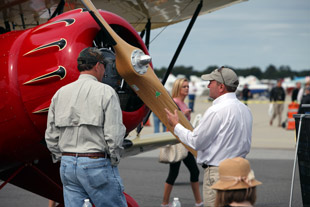 Having grown up in a small town, I know one when I see one. And St. Simons Island, Georgia, is most certainly a small town. So I guess it shouldn’t have come as a surprise when, as I’m sitting there enjoying my pancakes with 700 other pilots, a friendly guy sits down, takes a look at my name tag, and says, “Twombly, like the Wellsville Twomblys.” It turns out Alex Becker also spent some time in a small town—mine. He took over my uncle’s apartment, flew with my grandfather, and presumably enjoyed the same Texas Hots. A more perfect coincidence I could not have scripted. Two guys from the same small town, meeting in another small town for the first time decades later, thanks to the small world of aviation.

Fly-ins by the numbers

803 Rusty pilots learning how to get back into aviation