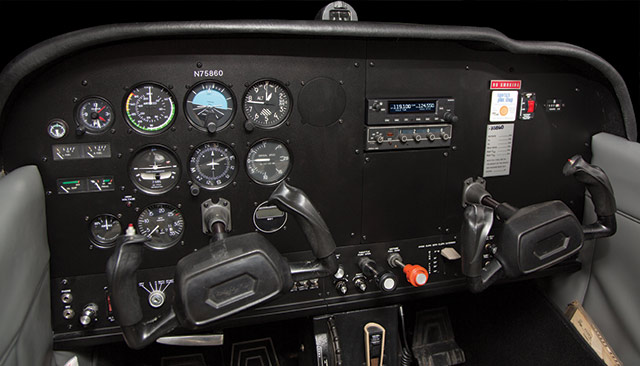 A refurbished Cessna 172 that will offer more cost-effective flight training is at the heart of the Cessna 172LITE project, announced Dec. 17 by Sporty’s.

“Sporty’s is acquiring 172s and equipping them with basic flight instruments along with significant interior and exterior enhancements,” according to a press release. The first one is on the line at Sporty’s Flight Academy at Clermont County Airport, Batavia, Ohio. It rents for $99 per hour.

With avionics limited to a communications radio and a transponder, the Cessna 172LITE is intended to be a simple mission trainer that will not overwhelm new students with “dozens of switches, buttons, and knobs providing access to unneeded information.” At the same time, the airplane has been given a new metal panel with new, durable switches, as well as new paint—“for that attractive first impression,” Sporty’s said.

The Lycoming O-320 engine and the propeller were overhauled. The rear seat was removed; the seats have been reupholstered; and the sidewalls, head liner, and floor covering have been replaced.

The result is an airplane that looks new to the client, said Sporty’s Founder and Chairman Hal Shevers. “Due to the low acquisition cost, we can offer it for just $99, lowering the cost of admission in a Part 23 certified aircraft capable of flying two real-sized adults," he said in a press release.

With only essential instrumentation, the student will learn fundamental airmanship, Shevers said. After mastering those necessary flight skills, the student could then advance to more expensive aircraft to complete training, he said.

Sporty’s said it plans to add a second Cessna 172LITE to the flight line, and will share resources, best practices, and information with other flight schools interested in assembling a basic trainer.

“We’re interested in selling more of them,” said Charlie Masters, vice president of sales, Sporty’s Eastern Cincinnati Aviation. He said the airplanes can be equipped with more sophisticated avionics if a flight school desires, but that will add to the price.