Get the app Get the app
Already a member? Please login below for an enhanced experience. Not a member? Join today
News & Media Earning your stripes

The glamour of corporate flying

A crusty old chief pilot once told me early in my jet flying career that I seemed a bit too eager to please at times, a little overly energetic to complete one task and move on to the next. 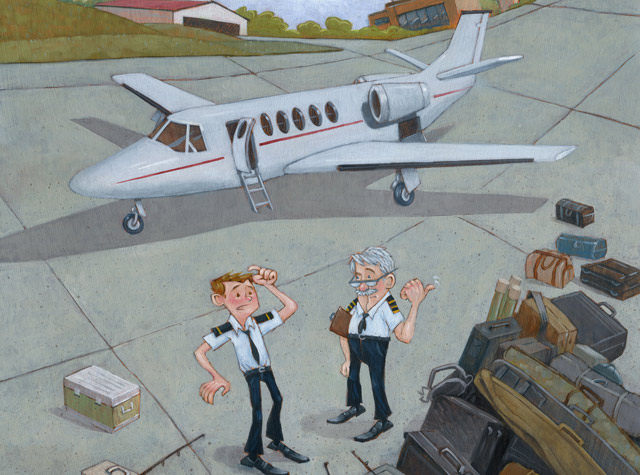 A crusty old chief pilot once told me early in my jet flying career that I seemed a bit too eager to please at times, a little overly energetic to complete one task and move on to the next—as if fitting in at a flight department was somehow tied to completing as many tasks as possible in a single day. Not a person for wasting time, he said, “You still have a lot to learn.” But when the critique of my talents began with him calling me “an aviation pup,” it was tough to hold back a smile, so I didn’t try. The guy had a heart, after all. 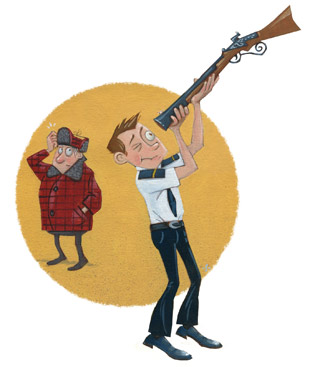 One of the first things I learned on the Cessna Citation II, my first training jet, was how to load bags—lots and lots of bags.

One afternoon six big fellows showed up for a hunting trip to south Georgia. They obviously knew the drill that I was still learning, because they dropped everything near the rear cargo hatch underneath the left engine. I watched as duffle bags of all sizes and colors, guns, fishing poles, and Styrofoam coolers were piled pretty high on top of each other. Forget figuring out the weight and balance for these hefty passengers, I thought, as the captain walked up to the pile. “Start loading so we can get out of here,” he said, and left for the cockpit to grab the clearance.

How tough could this be, I thought. I’d loaded station wagons, right?

A couple of duffle bags went in pretty easily, but then I grabbed one that must have weighed 100 pounds. Of course I was slow at this, and it was a warm afternoon, so now I’m sweating—a lot. One of the line guys took pity and walked over to help. The two of us barely got the big bag in. Maybe getting it out would be easier.

I continued tossing the near-empty coolers—and then there were the guns. It was almost full in back so I moved the guns up front to the nose compartment. I checked the latches both front and back, hopped in the cabin, and closed the door as the left-seater started the right engine.

“You checked that the guns were unloaded, didn’t you?” he asked. I just stared as he pulled the left throttle to cutoff and shut down the engine. He looked at me like I was a complete idiot. “Get out there and check them.” Now, my life involvement with weapons was limited to a single day of M-16 training in the Air Force. I realized there had to be a way to keep from looking stupid to all these guys, so climbing out of the right seat, I asked who wanted to help me check the guns before takeoff. The biggest guy moved toward the door as I opened it. “You must be the new guy, eh?” How’d he know that? 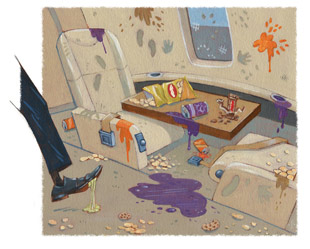 On another trip we carried a family with three little kids to Orlando to visit Disney World. It was a smooth trip and the sky turned to night an hour after takeoff. The left seat guy and I listened to the kids making noises that sounded like a good time, although every so often the captain would give another listen and then look at me, and shake his head.

“Do you know who they are?” he asked (they were a prominent family from the North Shore of Chicago). I shook my head. “Just wait until we get to Orlando.”

Because the landing weather at Orlando Executive included drizzle, I hurried to shift the baggage out of the rear cargo bay into an SUV waiting for our passengers. They were gone moments later, without a word. By the time I returned to the cabin, the aircraft was already connected to the ground power unit to make it easier to light up the cabin.

I only managed to get my head in before I stopped dead in my tracks. It looked like a food bomb had exploded and the wrappers I found were the residue. Empty chip bags, candy wrappers, and pop cans were strewn across the floor, with a few more tossed on the seats. There were even empty cans in the lav. If I didn’t know that the entire flight had been smooth, I’d have thought we’d flown through enough turbulence to empty every snack drawer on the airplane. Actually, the drawers were empty, but three kids and two adults messed up our airplane worse than any turbulence I’d ever flown through.

Of course, there wasn’t much we could do except start at a different ends of the airplane, tossing the trash into plastic garbage bags—or so I thought. The captain stopped at one point and looked at me. “Any idea how we get ground chocolate out of a leather seat?” I just shook my head. 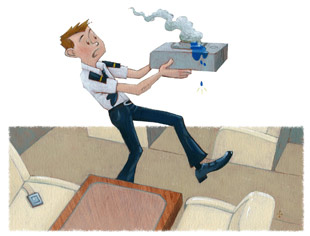 Sometimes training on a business jet just stinks. Like a number of light jets, the Citation II has a chemical toilet. If you think of it like a slightly upgraded aerial outhouse, we’d be on about the same wavelength. To me, of course, any airplane with a bathroom was pretty cool—until we were getting ready to head for the hotel one night and the captain asked, “Did you service the lav?” I’d never been trained on that option, I replied. He smiled. That’s the night I learned our Citation was equipped with an internally serviced lav bucket, and not one that a line truck hooked up to from the outside.

In English, that meant the pan that sits beneath the potty on the airplane must be removed by hand, a bit like sliding a broiler drawer out from beneath the oven at home. But the smell was worse—much worse. Just a few quick screws to loosen the box and out comes the pan, that I quickly learned, is nearly as wide as the cabin aisle itself. The trick, then, is not only knowing how to remove the stinkpot, turn around, and head down the aisle toward the front door. The real trick is to never, ever bump up against an armrest before you exit the cabin, because just so much as even the tiniest spill along the way means both pilots might well be trying to clean the blue-juice mess out of the carpet for hours.

The only question I wanted answered before I eventually upgraded into the Hawker 800 was how the lav was serviced. Another pilot explained, “The ground service trucks hook up to the back of the airplane for that. Why do you ask?” I knew he’d never, ever flown as a Citation II co-pilot.