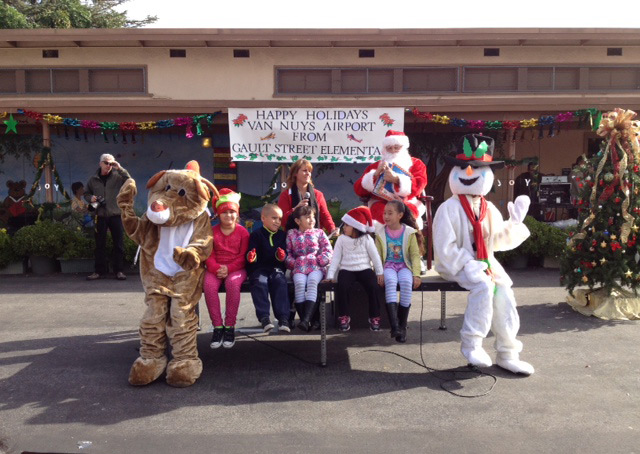 There’s a good deal of holiday cheer afoot at California’s Van Nuys Airport these days, and the spirit of the season hasn’t stayed confined to the airport grounds.

The festive air is evident at the control tower. It extends to the airport administrative offices and from there out to a local elementary school that the airport has "adopted." There, on Dec. 18, a renowned sled pilot and his friends paid a call, bringing presents, performing magic, and serving up fun to help make the season even more special.

If you’re not planning a flight into Van Nuys over the holidays, go to the airport’s Facebook page and check out how the local ATC crew is delivering a clearance to be merry.

"The VNY tower displays its airport pride in a show of holiday lights," says a caption above a photo showing the control tower with the airport’s identifier, VNY, up in lights just below the cab at the top of the structure.

The airport administrators also have the spirit, and they helped spread it to community youngsters on Dec. 18, dispatching Santa, Rudolph, Frosty, and elves for a visit with the 500 students at the Gault Street Elementary School.

The airport’s educational program offers activities including "speaking engagements, participation in student career days and involvement in school functions," and is designed to further the airport’s "longstanding commitment to the science education of future leaders."

Each year, Van Nuys Airport “sponsors a special holiday program at a local elementary school that features a visit from Santa Claus accompanied by some well-known mascots. Event highlights include gifts for all students, live entertainment and drawings for special prizes donated by local retail, recreational and entertainment establishments,” says the Web page on the airport’s aviation-related educational programs.

The busy general aviation airport in Van Nuys is one of three airports owned and operated by Los Angeles World Airports, a branch of the city of Los Angeles. Van Nuys Airport is "dedicated to noncommercial air travel," and logged more than 270,000 operations in 2013. More than 100 businesses are located on the airport, which is "served by four major fixed-base operators and numerous aviation service companies," according to Los Angeles World Airports. The airport estimates its annual contribution to the economy of southern California as $1.3 billion, and more than 12,000 jobs.