Get the app Get the app
News & Media IFR Fix: Keene expectations 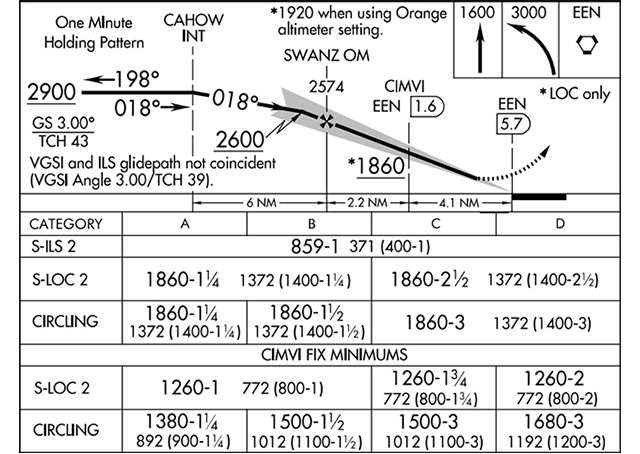 It has been a long time since you flew the ILS or LOC RWY 2 approach to Dillant-Hopkins Airport in Keene, New Hampshire. You are expecting the approach on today’s proficiency flight—and based on your arrival from the east, you expect clearance via the no-procedure-turn transition from the 323-degree radial of the Gardner VOR to the localizer course.

Your preparedness to fly this specific variation of the approach is a result of your hour-long preflight ground review, which your instructor opened by sliding the approach plate across the table in the restaurant café and asking you to list the various ways the approach could be flown.

A glance at the minimums section of the plate presents the options: You can fly the approach as a precision ILS, or as a localizer-only procedure. If flown localizer-only, you can fly it straight-in or as a circle-to-land procedure, with several variations on that theme possible.

There’s also the CIMVI factor: Aircraft equipped to identify the CIMVI fix at 1.7 nm from the Keene VOR can avail themselves of lower minimums on localizer-only approaches, whether straight-in or circling. Using CIMVI minimums yields 600 additional feet of descent on the straight-in localizer-only approach for Category A and B aircraft—significantly improving chances of getting down in bad weather.

The Keene VOR’s unavailability exerts great effect on the local IFR infrastructure, for example by rendering numerous published departure procedures not authorized, "except for aircraft equipped with suitable RNAV system with GPS." Also, the straightforward three-step route to holding after a missed approach is based on the non-functional navaid. What’s the alternative miss?

How many ways are there to identify CAHOW? Which method would you use with the VOR out of service?

The Keene VOR isn’t the primary navaid for the approach, but it is clear from your preflight prep that the navaid’s unavailability is an essential information item for your flight.