Get the app Get the app
AOPA Members DO more LEARN more SAVE more - Get MORE out of being a pilot - CLICK HERE
News & Media Training Tip: Never exceed speed 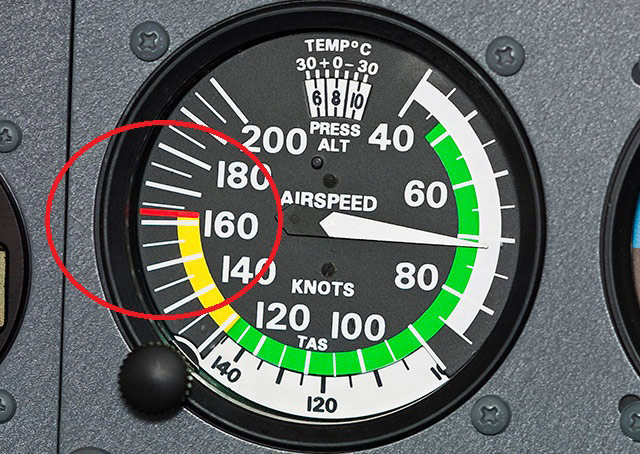 A student pilot is practicing slow flight, stall entries, and stall recoveries prior to a scheduled checkride. During the recovery from a power-on stall, the trainee lowers the angle of attack to regain airspeed and control effectiveness, as always, and is returning the trainer to level flight when an unexpected wail emanates from the stall-warning system.

If the student applied forward elevator pressure too aggressively during the stall recovery, airspeed may have increased rapidly, especially with power on. Then, if back pressure was excessive, or abruptly applied, during the recovery to level flight, the wing’s angle of attack may have approached or exceeded the critical angle, producing the warning of an incipient secondary stall.

A glance at the airspeed indicator during the nose-down phase of the recovery might have shown the needle well into the yellow arc, trending toward VNE, the aircraft’s never exceed airspeed, signified by the red line at the top of the airspeed range. VNE is defined on Page 10-17 of the Pilot’s Handbook of Aeronautical Knowledge as "the speed which should never be exceeded. If flight is attempted above this speed, structural damage or structural failure may result."

Of all the airspeeds a pilot learns when reviewing the trainer’s pilot’s operating handbook, this one may seem the simplest to grasp. It may also seem the most remote from normal operations—but its hazards could present themselves suddenly, as the example given above illustrates.

The VNE for a 1980 Cessna 152, according to its pilot’s operating handbook, is 149 KIAS. That’s well above speeds in the normal cruise range, and far in excess of the aircraft’s maximum structural cruising speed (VNO) of 111 knots.

That much margin might make an airspeed excursion toward VNE seem unlikely. But in scenarios such as recovering from a stall, a spin, or a spiral dive (the latter typically resulting from loss of control after inadvertent flight into instrument meteorological conditions) airspeed would increase quickly toward the critical value. The pilot must recognize the potential hazard and execute a delicate recovery, to avoid imposing a critical load on the airframe.

Give that risk the respect it deserves. This expanded description of VNE explains how the value is devised, and notes that in such a risky neighborhood, "a baby's breath will cause the aircraft to exceed its limit load factor, and structural damage will result."