Get the app Get the app
AOPA will be closing at 3:15pm ET Thursday, December 1st. We will reopen Friday morning at 8:30am ET.
AOPA Members DO more LEARN more SAVE more - Get MORE out of being a pilot - CLICK HERE
News & Media Glider certificate leads to powered flight, scholarship 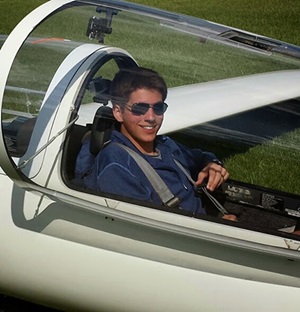 Chris Zaboji of Reston, Virginia, was a certificated sailplane pilot and member of the Skyline Soaring Club at Virginia’s Front Royal-Warren County Airport long before he earned a private pilot certificate in a single-engine airplane in November at age 17.

The powered airplane wasn’t a difficult transition, he said. The airplane training, at Aviation Adventures in Leesburg, Virginia, was a study in contrasting flying techniques as he worked to master the most unfamiliar characteristic of a powered aircraft: the engine.

For a pilot used to seeking out lift where it lives, and taking what he can get on finding it, having a power source at his fingertips took some getting used to.

"I felt like I was cheating," he said of the initial impression.

Another glider pilot’s impression was that the airplane required less rudder to keep maneuvers clean. Turbulence seems more irksome in the airplane than in the slower-flying glider, Zaboji said. Perhaps that’s because you expect it in soaring, whereas in an airplane the bumps just mar an otherwise enjoyable effort to go somewhere.

Zaboji said his father Steve, also a pilot, offered an observation to put the Cessna 172’s throttle in perspective for someone used to gliders: "My dad said, 'It’s the opposite of a spoiler.'"

Earning his private pilot certificate, airplane, single-engine land, in his first year of eligibility was not the only major aeronautical accomplishment of 2014 for the younger of the two Zaboji family aviators.

In a boost to his goal of becoming a professional pilot, Zaboji was named the winner of the Soaring Society of America’s 2014 Kolstad Award College Scholarship. The $5,000 grant "is intended to help finance college-level study and is to be paid directly to an academic institution of the applicant's choice," according to the Soaring Society of America.

Winners are chosen competitively each year from a pool of applicants between 14 and 24 years of age who are "of great service at a USA gliderport." Sponsors from the soaring community intend for the scholarship to inspire young pilots "to progress from basic glider flying to advanced sport soaring, and to attend college."

According to the Soaring Society of America, the award fund was established in 1968 by the members of the Colorado Soaring Association and the Black Forest Soaring Society, including Mid and Ken Kolstad, soaring pilots since 1941. The grant honors the memory of Paul Kenneth Kolstad (1951-1966), who "still holds the Colorado State Record for Junior Goal with his flight of 208 miles from Black Forest to the Scottsbluff, Neb., airport on 11 July 1966."

Whether Zaboji’s future in academia will take him to Virginia Tech (a favorite on his list) or another institution hasn’t been decided, nor has he resolved whether an aviation career path will take him in the direction of military or air transport flying.

In the meantime, Zaboji is broadening his horizons in powered and unpowered flight—experience that lets him produce copious quantities of YouTube video content, allowing him to share his aviation ventures, including his first glider solo with a worldwide audience of aviation aficionados.

Dan Namowitz has been writing for AOPA in a variety of capacities since 1991. He has been a flight instructor since 1990 and is a 35-year AOPA member.
Go to Dan Namowitz's Profile
Topics: Scholarship, Glider, Training and Safety