Get the app Get the app
We will be performing maintenance on our systems Sunday, 8/21, beginning at 12:00 A.M. ET and ending at 6:00 A.M. ET. During this time, you may experience intermittent service outages. We appreciate your patience.
News & Media Time flies 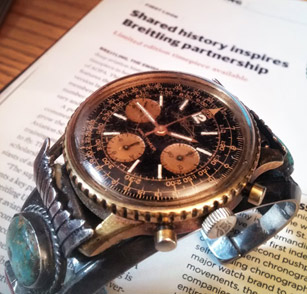 I joined AOPA in the 1960s. I had started flying in Aspen, Colorado, in 1957 in a 90-horsepower J–3 Cub, after I had my initial 10-hour instruction at College Park Airport in Maryland. Both airports were dirt/grass strips then. Hanging out at the Aspen airport, working on starting a glider-ride operation, I met an Aspen Airways pilot—who was flying Convair 580s between Denver and Aspen—and noticed he was wearing the Navitimer when he showed me his calloused hand from wrestling the Convairs on that route. I had to have one of those watches, and must have bought it from AOPA in the mid-1960s. I liked the circular slide rule and the stopwatch, which I used for flying glider rides and lessons. Simply a push on the button at the beginning and the timer was there to let me know my progress.

Teaching skiing in the winters for 45 years, the timer did the same service. It did not seem to like my pole plants, but was easily repairable. Crystals were replaced and the outer ring on the slide rule was lost somewhere, but it is still ticking! It’s a nice piece of jewelry, with its classic look and the Navaho clip.

In 1967-68, I was working the flight line at night at St. Pete/Clearwater Airport in Florida after high school classes ended. At 16 years old with a private pilot certificate and working on my commercial, my life was all about airplanes. I also worked the front desk. Under the glass counter was that pilot symbol—a new Breitling Navitimer. Back then you needed a kneeboard and a watch to be a real pilot. I worked for a “saint” who knew I really wanted that watch. Mr. Russell Saint Arnold, owner of Saint Aircraft, made it happen. He said pay what you can when you can. He was a good man. Fueling the flight line at night was not huge pay, but by 1969 I owned the watch, was a flight instructor, and wore the watch—as I do today—with great pride. Thank you, Saint—which was what we all called him.

I do own the original AOPA Navtimer. My father gave it to me as a gift in 1965 when I passed my private pilot exam. The one he gave me looks very much like the one in AOPA Pilot magazine, except that mine has a 24-hour dial. It works perfectly and I wear it about once a month to keep it happy. Although my father has been gone quite a few years now, I always look at it with fond memories—especially when flying the same Aztec in which he used to join me to fly to fishing places. 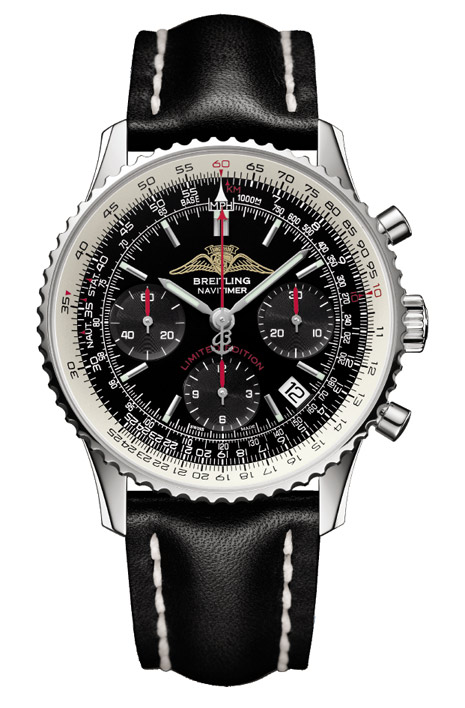 AOPA chose Breitling’s Navitimer as the association’s official timepiece, with the AOPA wings on the watch’s face. AOPA began offering the Navitimer at a special price beginning in 1954, and kept the Navitimer in this role for the next 14 years. In that time, AOPA Navitimers went through subtle changes.

• From 1957 to 1979, Navitimers were imported, distributed, and serviced by the Wakmann Watch Corporation. They have a WOG mark on their movements.

• Early non-AOPA Navitimers, and Navitimers sold in Europe, have the Breitling “B” on their faces. Starting in 1964, non-

AOPA Navitimers had Breitling’s own logo—Breitling Geneve—on the face, with two airplanes flying in formation.

Now AOPA and Breitling have reestablished their decades-long relationship, as symbolized by the issuance of the Seventy-Fifth Anniversary Limited Edition AOPA Navitimer, in a limited-production run of 750 watches. For pilots and watch afficionados alike, this is a milestone event. A highly accurate, very traditional, self-winding mechanical watch of historical significance is back on the market. This special-edition watch is being offered to AOPA members only, for $6,500 if they choose a black leather wristband or $7,655 for those wanting a stainless steel band.

Breitling, an AOPA Strategic Partner, will donate $200 from each sale of the new AOPA Navitimers. These funds will go toward the establishment of the Breitling Aviation Scholarship Fund, which will provide 10 scholarships of $5,000 each to help selected ab initio students earn their private, sport pilot, or recreational pilot certificates. The scholarships will be administered by the AOPA Foundation.

This watch promises to become quite valuable over the years. And why not? It has the same black subdials as the original AOPA Navitimers—plus new, red subdial and second-hand pointers and, of course, AOPA’s wings. You can even customize the watch with your name and membership number on the watch’s base. For more information, and to order your watch, go online.—TAH

Why I love watches

My love of watches is difficult to explain—even to myself—but, contrary to the belief of my friends, it has little to do with price, size, or brand. My grandmother, a jeweler, gave me my first watch when I was 7 years old and I have worn one every day since. Like Linus, it’s my blanket.

So why do we feel the need to wear and carry watches, good luck charms, jewelry, and even tattoos? Is it vanity? Or is it because they are reminders of memories and accomplishments in our past? A good watch is an investment, and, on my fortieth birthday, I received an Omega Seamaster that I had wanted since I was a teenager. It rarely leaves my wrist. It has provided countless answers to, “Dad, when are we going to get there?” It kept me on time for my first date with my fiancée, counted down the remaining seconds of three new years, and been on countless adventures in every imaginable condition.

Will a cheap watch or a cellphone tell you the time? Yes, it will. But nobody gives their son or daughter an old cellphone on their graduation or wedding day.

Take a look around. It seems like every wrist sports a huge, thick, clunky-looking watch. How did this fashion come about, you may wonder?

The answer lies in the intertwining of aviation and watchmaking history. It’s interesting to note that before aviation came along in the early 1900s, there were no wristwatches to speak of. Pocket watches were the rule for men; women wore watches pinned on their blouses, or as a pendant. For those who couldn’t afford to buy a watch, the town clock or church bells served as timekeepers, or a factory whistle, or the family grandfather clock if you were fortunate enough to have one.

The first recorded mention of a watch made specifically for pilots came in 1906. That’s when Brazilian Alberto Santos-Dumont, previously a balloon pilot, flew his first airplane, the 14-bis, before an audience in France. Santos-Dumont kept track of the durations of all his flights, but when it came to measuring time in an airplane there were difficulties. Pulling out a pocket watch while manipulating the flight controls in heavy clothing and gloves was an impossibility.

What Santos-Dumont needed was a watch he could wear on his arm—one with a face large enough to easily see while dividing his attention. His friend Louis Cartier listened, and made the first pilot watch—which he called the Santos-Dumont, of course. The Cartier wristwatch caught the public’s imagination, and soon it became a bestseller in a world that was rapidly becoming fascinated with all things aviation. Word has it that before this time, the very first wristwatches were worn by women as jewelry; Santos-Dumont made wristwatch-wearing a manly fashion.

As aviation advanced, pilot watches kept pace. In 1909 Louis Bleriot made the first crossing of the English Channel in his Bleriot XI. His wristwatch, a Zenith, had some new features: a luminous dial and numerals, extra-large numbers, and a huge crown that protruded from the case. The latter made it easy to wind the watch while wearing gloves.

During World War I, wristwatches were worn by military officers, and the public popularity of the wristwatch began a steep rise. By the 1930s, pocket watches were sliding out of style.

Charles Lindbergh’s solo crossing of the Atlantic in 1927 inspired the next round of innovation in pilot watches. In 1931 he collaborated with Longines to make a watch capable of determining longitude by calculating the sun’s hour angle. This was done by rotating the watch’s outer bezel so that elapsed time—translated into degrees and minutes of longitude—could be measured in the cockpit. The alternative was using a sextant—virtually impossible in a small airplane experiencing turbulence. Lindbergh’s popularity was at its peak in those days, and as a result many of Longines’ Lindbergh watches were sold—most to people who didn’t have the slightest need to determine the longitude of their position. This watch marked the first time the worldwide public glommed onto a purpose-built pilot watch as a fashion statement.

Lindbergh may have needed to know his progress over vast distances, but Swiss manufacturer Breitling made it possible to measure short distances and times by merging its expertise in making stopwatches with conventional wristwatches. By 1934, Breitling developed separate start/stop and reset buttons. In 1942, Breitling went a step further with its Chronomat wristwatch—which combined stopwatch features with a circular slide rule manipulated by a rotating bezel. Prior to this, Breitling made panel-mounted chronographs for Britain’s Royal Air Force, and even took the risk of smuggling them out of Nazi-occupied France from remote airstrips under cover of darkness.

Other watchmakers may have capitalized on the design, but Breitling’s Navitimer retains its popularity—and its value—to this day. The company even makes other aerospace-oriented wristwatches such as the Navitimer Cosmonaute (with 24-hour dial markers) and the Emergency (with a built-in personal locater beacon and antenna).

Today, there are all sorts of gaudy, big-dial, numeral-bedecked self-winding, quartz, and even solar-powered knockoffs that owe their mass appeal to utilitarian pilot watches. And like the scads of leather B-3 bomber jackets and A-2 flying jackets on the market, most of them are not the genuine article.

And Breitling’s Navitimer is stronger than ever. The classics live on, and always will.