Get the app Get the app
AOPA will be closed July 4th, in observance of the Independence Day holiday. We will reopen at 8:30 am ET on Tuesday, July 5.
News & Media 75-year-old pilot encourages older potential flyers 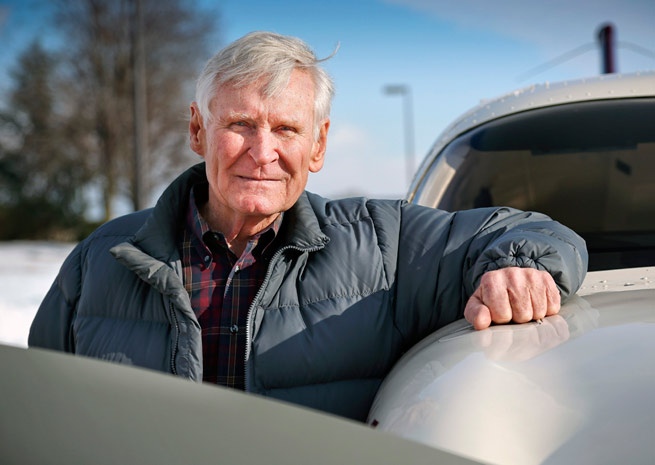 Howard Johnston, a 75-year-old retired lawyer in Roswell, Ga., has a special message for older people who want to learn to fly: Go for it. “It’s very fulfilling. It’s also challenging, but it gives you the kind of mental exercise that you need at that age,” he said. “Both the exams, training, and instrument flying requires your full attention. You can’t text and fly at same time."

In early 2003, Johnston drove by DeKalb-Peachtree Airport. “I impulsively stopped in and talked with a flight instructor. I eventually signed up for lessons at Gwinnett County-Briscoe Field (LZU)  in Lawrenceville in April 2003,” he said. He soloed that December and got his private pilot certificate in early 2004.

Johnston had the usual reasons for the gap between his first flights in the 1960s and when he started his lessons: family obligations, work, and money. “I had always been a fan of general aviation, but never pursued it until 2003,” he said.

Johnston bought the Archer in May 2005 after becoming tired of flying rental aircraft. “Also, it just wasn’t practical if you were doing cross countries regularly and keeping an aircraft away from an FBO for a week at a time,” he said.

Johnston had determined that he really liked the Piper Archer. “I looked at aircraft on Controller.com. I ended up purchasing my plane from an older gentleman who had the plane based in Sarasota, Florida,” he said. “It was in perfect condition when I got it. It had 300 hours.”

Visits to his vacation home in Jupiter, Fla., prompted Johnston to get his instrument rating in February 2007. “I took two VFR trips down there from LZU and encountered weather twice,” he said. “My instrument rating just opened so many more flying avenues.”

In 2013, Johnston had flown for 10 years without incident, with his medical certificate and instrument rating current. “But I read an article in AOPA Pilot where the writer had determined at my age that he wasn’t going to fly anymore,” he said. “He had thousands of hours, and when a guy with those many hours says this, I realized that I needed to also accept that reality and come to terms on your own limitations. I feel that I’ve enjoyed it, but it’s time to quit.” Johnston, now a 725-hour pilot, recently sold his airplane but said that he will occasionally rent a Cessna 172 to maintain currency.

Johnston said he has taken at least 20 guests up in his aircraft that were a variety of ages who have never flown. “The oldest was a 78-year-old nun. Everyone who ever flew it was addicted to it,” he said. “If they showed proficiency, [I] allowed them to fly the pattern and make a visual approach, and I assumed control and landed the plane. Once they get that feeling, it hooks them on the process.”