Get the app Get the app
AOPA will be closing at 3:15pm ET Thursday, December 1st. We will reopen Friday morning at 8:30am ET.
AOPA Members DO more LEARN more SAVE more - Get MORE out of being a pilot - CLICK HERE
News & Media Historic FAA DC-3 moving to new home in Texas 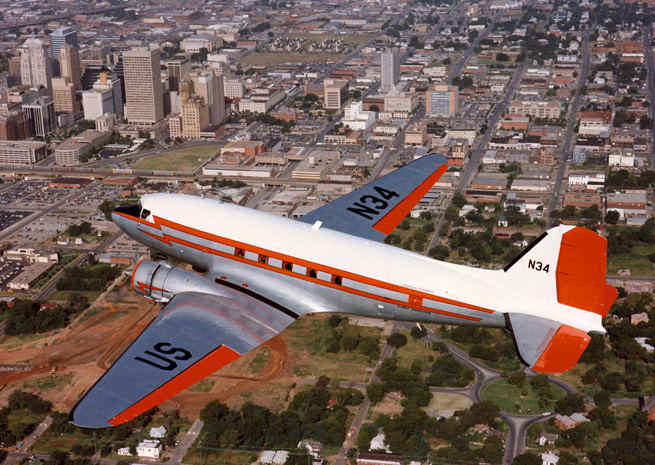 A Douglas DC-3, one of two movable items on the National Register of Historic Places, is about to move to its permanent home at the Texas Air & Space Museum in Amarillo. The DC-3, tail number N34, was retired by the FAA in 2009 and has been stored in the Mike Monroney Aeronautical Center in Oklahoma City.

After its retirement in 1981, N34 spent years in storage or flying to airshows around the country. Reconditioned in 2002 to participate in the U.S. National Centennial of Flight in 2003, it later flew in 2008 and 2009 to help celebrate the fiftieth anniversary of the FAA.

After the FAA determined they could not keep N34 anymore, they originally offered it to the Oklahoma Air and Space Museum in Oklahoma City, said Roland Herwig, a public affairs officer for the agency. “We looked throughout the nation for a location that would put the aircraft on display meeting our requirements, [including keeping the aircraft] inside, left in original configuration and paint scheme, and no flying,” he said. “The Texas Air & Space Museum was only one that met those requirements.”

The FAA offered the aircraft to museums across the country. The Texas Air & Space Museum is next to Rick Husband Amarillo International Airport, said Richard Warner, vice president of the museum. “And we have eight large buildings, so we have the space to keep it indoors.”

The FAA came to Amarillo in January 2013 to inspect the museum, said Herwig. “The decision to give the aircraft to the Texas museum was made shortly after the visit, but official decision wasn't made until the FAA administrator signed our decision memo in January 2014.”

On Feb. 13, The aircraft is scheduled to fly under a special ferry permit from the Monroney Aeronautical Center to Rick Husband Amarillo International Airport, then taxi down the taxiway to the Texas Air & Space Museum. On March 1, N34 will be open to the public for viewing among the museum’s 10 aircraft.