Get the app Get the app
Already a member? Please login below for an enhanced experience. Not a member? Join today
News & Media Safety Pilot Landmark Accident: Know the territory

Night operations in the mountains have considerable risk with little margin

Many of us sweat instrument approaches, but departures can be every bit as risky. 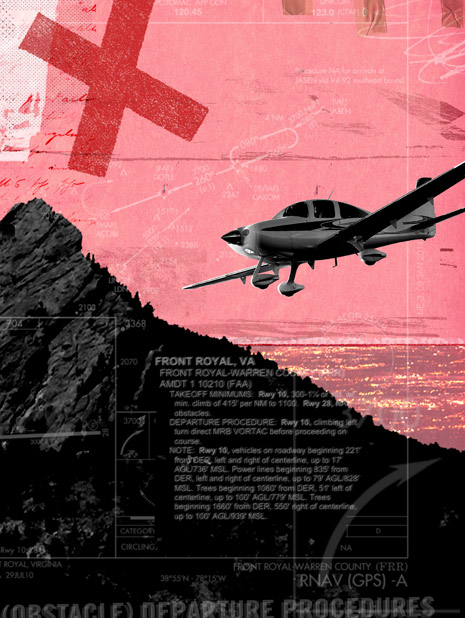 Many of us sweat instrument approaches, but departures can be every bit as risky. Sometimes the warnings are subtle and lie buried in the approach chart booklet. Sometimes technology can only aid, but not replace, basic skill. Procedures need to be verified and the aircraft must be configured before taking the runway. While the facts in this accident are straightforward, there were many more links in the accident chain than might be obvious at first. What could go wrong, indeed?

At 11:19 p.m. the pilot filed an IFR flight plan for the return to BWI and at 11:24 p.m. he telephoned Potomac Clearance Delivery for an IFR clearance. According to the NTSB, “The clearance included initial instructions to fly direct COGAN intersection, climb and maintain 4,000 feet mean sea level (msl), expect 5,000 feet msl 10 minutes after departure. The pilot’s release time was 2350, with a clearance void time of 2355.” (The COGAN intersection is to the northeast of Front Royal.) There were no further ATC communications with the aircraft.

The flight departed Runway 28 early, at 11:48 p.m. An airport surveillance camera captured the takeoff—and one minute and 20 seconds later, recorded a fireball on the mountain ridge about three miles west of Front Royal. Ground-based radar logged two hits on the aircraft’s transponder, at 11:48:35 p.m. at 1,700 feet msl and four seconds later at 1,800 msl.

The Cirrus hit the ridge at about 1,200 feet msl. The aircraft parachute was not deployed and the pilot and his son were killed.

The 54-year-old private pilot was instrument rated for airplane single-engine land. His most recent FAA third class medical certificate was issued on October 15, 2007. At that time, he reported total flight experience of 180 hours. The pilot obtained his instrument rating on September 20, 2006. While his logbook was not recovered, an aircraft partnership usage log showed that the pilot had about 113 hours in the accident aircraft, with about 13 hours recorded since the medical and about five hours in the 30 days prior to the accident.

Actual and simulated instrument time could not be determined, nor did the log reveal any previous flights to Front Royal.

The pilot purchased the Cirrus SR22 new in 2006. It had a current annual inspection with 268 hours total flight time. No preimpact malfunctions were found.

The Cirrus was equipped with a terrain awareness and warning system (TAWS), which was destroyed, as was the multifunction display (MFD). However, the memory chips within the primary flight display (PFD) revealed a picture of considerable uncertainty in the cockpit.

According to the NTSB, “For the approximate first half of the one-minute, 20-second flight, the airplane flew runway heading and initially climbed about 900 to 1,000 feet per minute. About midway through the flight, the heading bug was set to approximately runway heading, and the vertical speed (and pitch attitude) began to oscillate. During an approximate 25-second period, the vertical speed decreased to about 0, then increased to about 2,200 fpm up, then decreased again and settled about 700 to 750 fpm up.

“During the oscillation, the vertical speed indicator changed from 0 to 700 fpm, where it remained for about 16 seconds, until it changed to 850 fpm up. During controlled flight just prior to impact, the airplane was climbing and accelerating, reaching a pressure altitude of approximately 2,200 feet msl and an indicated airspeed of 140 knots. About six seconds before the end of the recording, the airplane began a steep descending turn to the left (roll attitude reached a peak value of 95 degrees left wing down, pitch attitude reached a peak of about 27 degrees nose down).

“Prior to takeoff, the Desired Course parameter was set to about 050 degrees, where it remained throughout the flight. The course selection was consistent with a magnetic course from Front Royal to COGAN. Just after the airplane began its takeoff roll, a global positioning system waypoint of COGAN was selected. The primary navigation source was set to GPS number 1. The airplane did not fly toward COGAN, consistent with the global positioning system steering mode of the autopilot system not being selected.”

Night flying in the mountains is tough anytime, and especially bad when the weather is poor. The temperature/dew point spread had been within one or two degrees for much of the day with rain. Neither of Front Royal’s circling approaches is authorized at night. The weather apparently was marginal VFR, so a VFR arrival was legal but ill-considered. A far safer plan would have been to drive only 25 minutes to Winchester Regional Airport with a full ILS and more open terrain. That Front Royal was only 10 minutes away from his son’s school was a seductive and dangerous alternative.

Front Royal’s elevation is 709 feet msl and the impact occurred at about 1,300 msl, allowing for trees at the accident site. The nearby ridgeline then rises to about 2,000 feet msl. Onboard flight data monitoring showed the Cirrus climbing to 2,200 feet before rolling off to the left and entering a steep nose-down attitude. Final airspeed was not reported. The pitch oscillations on climbout indicate some level of distraction.

The aircraft was equipped with TAWS, assuming it was selected for display. Sometimes pilots tend to discount the warnings because they occur in normal phases of flight close to the ground. It is conceivable that the pilot may have belatedly realized the TAWS warnings were real and pulled the aircraft into an accelerated stall. That might explain the sharp left wing down and steep pitch down attitude.

Mode confusion or lack of a plan also may have contributed to the erratic flight path. It’s imperative before takeoff that all bugs are set, and the initial headings and altitudes—including turns—are memorized or written on Post-it notes, so that full attention can be devoted to establishing positive climb and getting the aircraft on the correct path and away from the ground. Nothing else matters at that point.

While takeoff to the west was inadvisable, it appears that the weather technically was VFR, but mountains have a chameleon-like ability to disappear at night. Treat night flight in any hilly terrain, or where the airport area is unfamiliar, as an instrument flight. That means following any published departure procedures. Front Royal’s approved obstacle departure procedure is to depart on Runway 10 with a climbing left turn to the north toward the Martinsburg VOR.

The guidance on Front Royal’s obstacle clearance departure pages of the NACO charts is cryptic: “Runway 28: NA—Obstacles.” More emphasis and clarity would be much safer. For example, “Runway 28—No takeoff—High terrain 3 nm west of airport.” Of course, to heed the warning it has to be read.

The Cirrus SR22 is a lot of airplane for a new pilot. Despite excellent new safety technology, the tools still have to be used correctly and IFR basics still are required. Night operations in the mountains have considerable risk with little margin. For CFIIs, we might spend considerably more time drilling into new instrument pilots the importance of knowing the territory surrounding the airport, departure procedures, and technology configuration. It’s just as important when leaving as it is arriving.