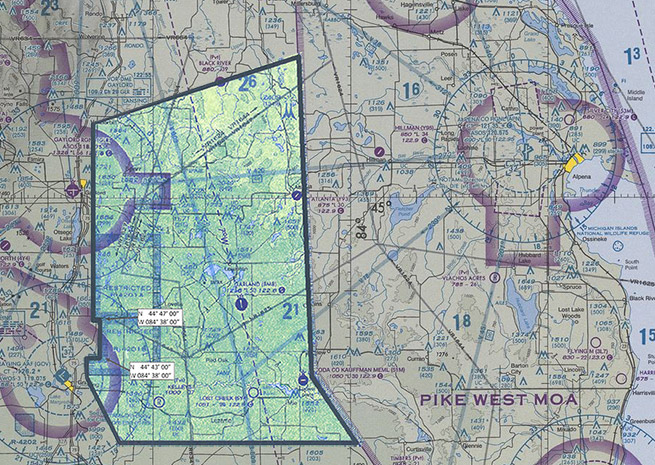 A military exercise planned for Northern Michigan in August stands to impact general aviation during a busy time of year in the region, and the FAA is accepting comments on the proposed temporary military operations area through March 17.

The Grayling TMOA would cover an area east of Grayling Army Airfield and Gaylord Regional Airport, extending to the Pike West Military Operations Area. The TMOA would extend from 5,000 feet msl up to but not including 18,000 feet, rendering Victor 78-609 (with an MEA of 5,000 feet) unusable when the TMOA is active. The TMOA would be active (with a notam issued four hours in advance) from 8:30 a.m. to 1 a.m. Central Daylight Time daily, Aug. 4 to 22 and Oct. 6 to 31.

The U.S. Air Force requested the TMOA to allow maneuvering between the Grayling Aerial Gunnery Range (R-4201A/B) and the Pike West MOA during planned exercises. Victor 420 also traverses the proposed TMOA, with a minimum en route altitude of 3,000 feet msl for the affected segment; there are four airports located within the lateral boundaries of the proposed TMOA.

AOPA encourages pilots to become familiar with the details, and submit comments to the FAA by mail to: Manager, Operations Support Group, AJV-C2, Airspace Study 14-AGL-03NR, Department of Transportation, Federal Aviation Administration, 2601 Meacham Blvd., Fort Worth, Texas, 76137. Please send a copy of any comments to AOPA.