Get the app Get the app
News & Media Ownership: Cold comfort

An oft-repeated maxim about open-cockpit airplanes says they should be flown only when the air temperature (in Fahrenheit) exceeds the pilot’s age (in years). 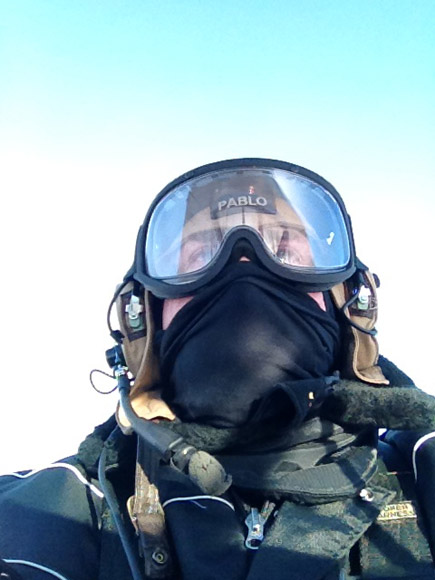 An oft-repeated maxim about open-cockpit airplanes says they should be flown only when the air temperature (in Fahrenheit) exceeds the pilot’s age (in years). But specialized clothing developed for motorcyclists and snowmobilers can extend the open-cockpit flying season well beyond the traditional spring-to-fall timeframe.

In late December, I ferried an open-cockpit Stearman PT—13 biplane on a three-day trip that began in the icebox of Minneapolis. And even though the air temperature was in the low teens on departure morning, an electrically heated jacket liner (plugged into a cigarette-lighter adapter) kept me toasty on the way to Florida.

In fact, the jacket liner (a 12-volt, $300 Gerbing model worn beneath a snowmobile suit) produced so much heat that I turned it off from time to time to keep from sweating.

Gerbing produces an entire line of electrically heated clothing that includes pants, socks, and gloves. But I bought only the jacket liner (7 amps) because I was concerned the entire wardrobe would overload the airplane’s electrical system. Also, the electric motorcycle gloves seemed too bulky to tune radios and avionics. (The jacket contains accessories that allow you to connect it directly to the vehicle’s 12-volt battery and bypass the adapter, but that wasn’t an option in the Stearman because its battery terminals are too big for the fittings provided.)

On previous winter cross-country biplane flights, my hands and feet had become uselessly and maddeningly numb. This time I wore double wool socks and brought chemical hand and foot warmers to place inside boots and gloves, and they kept my extremities toasty during the eight continuous hours I used them on day one.

Pilots know to be wary of any system with a single point of failure. Electrically heated clothing relies on the aircraft battery (and alternator), plug-in connection, and the heating element in the clothing itself all working properly and without interruption. It would be tempting to use only thin, electrically heated liners under jeans and a jacket and avoid the bulky coveralls. But those cumbersome garments could be lifesavers in case of an electrical failure in a remote region, or a forced landing in which you had to stay out overnight.

Fortunately, on this ferry trip to southwest Florida, I was never more than an hour from an airport, so I stowed the snowmobile suit in the baggage compartment on days two and three. The final piece of the puzzle for me was keeping my head warm, and a fleece balaclava, clear goggles, and a canvas flying helmet did a terrific job of that.

A few other things I learned along the way: Touchscreens don’t work with gloves (and seem to attract radial engine oil); iPad batteries drain quickly in the cold; an iPhone compass is far more accurate than the whiskey kind; self-fueling is tricky in a Stearman on an icy ramp; don’t work so hard on the ground that you break a sweat, as that moisture will come back to haunt you in the air. And finally, when you’re wearing multiple layers of clothing and plan to fly three hours at a time, stay away from coffee.AOPA