Get the app Get the app
News & Media Weather Watch: Trouble on top

Flying in on-top conditions is always held up as some sort of Holy Grail. 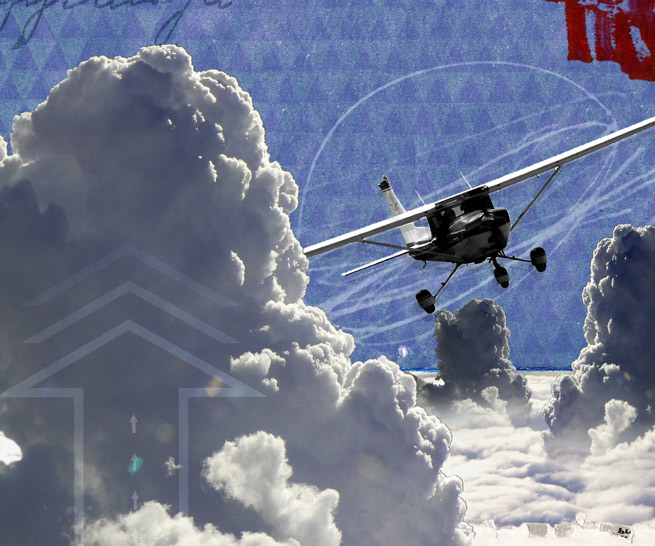 Flying in on-top conditions is always held up as some sort of Holy Grail. True, being above the clouds is definitely preferable to slogging along in the soup, where you’re apt to get beaten up by turbulence or slathered with icing (the areas near the upper limits of cloud layers can be especially icy when temperature and liquid water contents are conducive). Flying beneath the clouds often is no party, either, what with low-level terrain-induced or frontal turbulence—not to mention wind shear and the updrafts and downdrafts that accompany the vertical mixing within an active air mass.

True, smooth air and great visibility many times are hallmarks of on-top flying. Under visual flight rules (VFR), all it takes is weather that permits you to climb up through a cloud layer while maintaining VFR cloud clearance, then later descend under the same conditions. En route, you can fly VFR above an undercast. Under instrument flight rules (IFR) you can ask for a clearance to climb to on-top conditions—or simply file for a cloud-free altitude—but once on top, you must observe the flight rules for both VFR and IFR flying.

In thunderstorm season, I love flying on top. With a clear view all around it’s easy to spot cumulus buildups as they gain strength. Yes, any intervening clouds can make locating and avoiding buildups more of a challenge, but there’s always the option of a 180-degree turn to get away from trouble.

Or is there? There can be situations where this may not always be the case. Indulge me here while I tell you a story of one of my on-top antics.

When I was a newly minted commercial/instrument pilot I did a lot of time-building, and at one point I ferried brand-new Cessna singles from the factory in Wichita to a burgeoning flying club—Century Aviation—with bases at Leesburg, Virginia’s Godfrey Field; Dulles International Airport (yep, you read that correctly); and St. Petersburg, Florida’s Albert Whitted Airport. It was the glory days of general aviation manufacturing—and for the Cessna Pilot Centers and other franchise organizations run by Piper and Beechcraft. The factories would sell the airplanes to the FBOs running the pilot centers and flying clubs and the FBOs would sell the airplanes to customers, who in turn leased them back to the flying clubs.

One time I showed up at the Cessna factory in Wichita to take a Cessna 152 to Leesburg. It was mid-June and the weather briefing for the first part of my route mentioned the possibility of late-afternoon thunderstorms. Otherwise, all looked well for my first stops at the Rolla National Airport in Vichy, Missouri, and Cincinnati’s Lunken Airport.

There was more than the usual paperwork before I left, so I launched later than my customary crack-of-dawn practice. Soon I was at 3,500 feet; on top of a thin, scattered layer of fair-weather cumulus; and tooling along at a mighty 100 knots in glass-smooth air. Back then, many new singles left the factory with just a single navcom, and maybe an ADF. Without a transponder I had to perform 360s so that ATC radar could get a “skin paint” on me and thus provide a crude form of radar identification. So this was IFR flying at its most minimal.

On the way to Rolla cloud tops rose, so I climbed. Once again in the clear at 5,000 feet, all was well for the arrival at Rolla. Another check of the weather during the fuel stop showed no airmets or sigmets for the leg to Lunken, so off I went.

It was around Evansville, Indiana, that things started coming off the rails. By now I was flying in the heat of the day, and the tops had been steadily growing. And I was climbing to stay on top of them. By Evansville I was cruising at 9,500 feet, but it was plain to see that the clouds had no intention of slowing down. First I’d be in the clear, then I’d be weaving around the growing tops. The turbulence wasn’t too bad, and checks with flight service indicated no thunderstorm activity along my route—yet.

All I knew was that I didn’t want to deal with the turbulence in the clouds roiling below me, and I wanted to be able to visually identify and avoid any buildups. So I stayed on top. Soon I was climbing to 11,000 feet, then what to me seemed an incredible 14,000 feet—all with ATC seeing me as an intermittent radar return. I had to make position reports based on VOR passages and radial cross-bearings.

By Louisville even 14,000 wouldn’t keep me out of the clouds. And there would be no more climbing—after all, I was near the airplane’s service ceiling! I was weaving between and around towering cumulus clouds that were now well above me, and in increasingly aggressive turbulence.

Then flight service broadcast a convective sigmet. I was in the middle of the coverage area, and things weren’t looking good at all. I’d soon be descending for vectors into Lunken, and wouldn’t be able to stay out of the ever-darkening clouds for much longer—and the sun was going down. It would be a night ILS into lowering ceilings, based on Lunken’s ATIS.

A big problem was descending without simultaneously building airspeed. I asked, and was cleared, to make what amounted to large S-turns—now on instruments—so I could more easily shed altitude. The
turbulence got worse. Then it began to rain, harder and harder, so loud that I could barely make out ATC. So I kept turning up the speaker volume. Did I mention that I didn’t have a headset? (No general aviation pilots seemed to use them back then).

It seemed to take forever, but I wound up on the ILS and landed in good order, just as the sun was setting. But while taxiing in, you could tell that real trouble was brewing. Surface winds came in huge, shifting gusts, shaking the 152 and making it hard to steer. The skies above were churning. There was thunder. Then lightning. A helpful lineman directed me to a hangar, and we pushed the Cessna in just as torrents of rain and hail came down. He said we were under a tornado watch.

I went to the terminal building, ate at the Sky Galley, then slept on a bench in the lobby. The next day I’d be at Leesburg.

What did I learn? That flying on top has its downsides. That weather flying in an autopilot-less, transponder-less, radio-challenged, underpowered Cessna 152 is like fighting Mother Nature with a very small stick. That the weather can go from bad to worse in a shockingly short period of time. And that you shouldn’t let convective cloud tops force you higher and higher—unless there’s a safe path behind, you’ll just have to come back down through them.