Get the app Get the app
Already a member? Please login below for an enhanced experience. Not a member? Join today
News & Media Pilots: Jerry Knouff

Been there, done that

When you’ve done a little bit of everything in aviation, it can be hard to know what defines you. 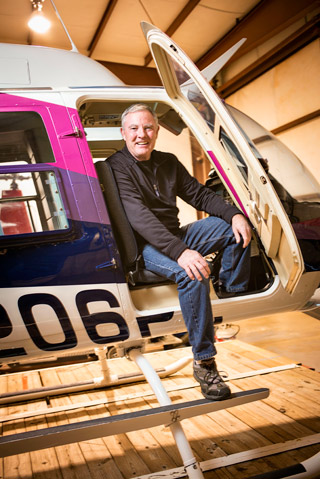 When you’ve done a little bit of everything in aviation, it can be hard to know what defines you. Despite flying L–19 Bird Dogs in Vietnam and doing who knows what for the FBI in a jet after 9/11, Jerry Knouff’s rich aviation life is still punctuated by a seminal moment on January 6, 1974—he was 24 the day he was co-piloting a Beechcraft Model 99 that crashed, killing 11 people. “Surviving this changes things,” he says.

The official line is that the pilots descended below the minimum altitude on the approach, but Knouff knows better. Sticking strictly to VREF with a load of ice in a heavy commuter is not a smart tactic, he says. Knouff remembers only waking up strapped to his seat 150 feet from the airplane, thinking he was home sleeping in his bed. “If it doesn’t hurt, you know something is really wrong,” he says. Recovery took more than eight months, at which point he resumed flying. “Success is based on how you handle adversity.”

After some years spent flying light helicopters and fixed-wing airplanes for various corporations, Knouff got a job flying for the FBI. The early days epitomized shoestring operations, with borrowed airplanes and a cacophony of duties. Over time the mission evolved, until the African embassy bombing—when Knouff says the bureau decided it needed a more global aviation asset. “I was at an airplane factory when 9/11 happened,” he says. “I took the keys and didn’t stop flying for five years.”

Knouff politely declines to describe his missions during this period, mentioning only a story about a mess hall encounter in Afghanistan and lots of time all over the world. He’s flown six attorneys general and the last three FBI directors—but most flights were what he deems “operations.”

Today in “retirement” he’s an active pilot examiner in both fixed-wing and rotorcraft. The later includes checkrides to military pilots, whom he describes as having superb flying abilities. “Trust me. You want the Coast Guard picking you up,” he says. Most of the fixed-wing flights are more interesting to him. He loves doing private and commercial checkrides in particular. “I’m back to where I started.” His joy of the basics is pretty profound, considering it’s coming from someone who’s flown almost 150 missions over the jungle, been a crewmember in an airline accident, and flown all over the world supporting a counterterrorism mission during one of the most violent times in American history. “Well, I do miss themissions,” he admits.