Get the app Get the app
News & Media Quick Look: Cheyenne II

In the mid-1960s,Piper, noting the success of Beech’s King Air, decided to explore the possibility of producing its own twin turboprop. 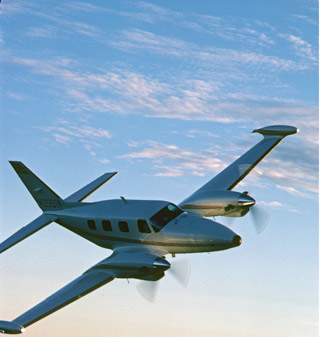 In the mid-1960s,Piper, noting the success of Beech’s King Air, decided to explore the possibility of producing its own twin turboprop. The manufacturer hired legendary aircraft designer Ed Swearingen to retrofit a Piper PA–31P pressurized Navajo with 550-shaft-horsepower Pratt & Whitney Canada PT6A-20 turboprops. After a successful first flight in April 1967 and further tests indicated that the Pratt powerplant and Piper airframe were a good match, the PA–31T Cheyenne was launched.

The Cheyenne was a simple and reliable entry-level turboprop that was more affordable and faster than the King Air 90. However, the Cheyenne’s smaller cabin could only accommodate two pilots and four passengers—plus a fifth passenger if the belted potty seat were used. Baggage space was limited, but the airplane could operate from relatively short runways and be flown by a single pilot.

The initial production model of the Cheyenne was powered by two 620-shaft-horsepower Pratt & Whitney Canada PT6A-28 turboprops and included 30-gallon wingtip fuel tanks. Dual King Gold Crown avionics were standard. The Cheyenne first flew in October 1969 and was certificated in May 1972. Cheyenne deliveries began in 1974.

When Piper introduced the lower-powered and less expensive Cheyenne I in 1978, the manufacturer renamed its original twin turboprop the Cheyenne II. Essentially the only difference between the original Cheyenne and the Cheyenne II were some cabin configuration changes. The stretched PA–31T2 Cheyenne IIXL, which had a two-foot-longer fuselage than the original Cheyenne, entered production in 1981. The IIXL has an extra cabin window on the left side, a nearly 500-pound higher max takeoff weight, and is powered by more powerful 750-shaft-horsepower PT6A-135s. Besides offering more interior room, the IIXL’s longer fuselage eliminated the need for the stability augmentation system.

Over the years, many enhancements for the Cheyenne II have been developed, with the most notable being Blackhawk Modifications, Inc.’s XP engine upgrade, which involves replacing the Cheyenne’s original engines with new 750-shaft-horsepower PT6A-135A turboprop engines. The simple bolt-on upgrade enables operators to cruise approximately 20 knots faster.

The PT6A-135A engine was also the cornerstone of the Super Cheyenne conversion, which was offered by T-G Aviation of Hamilton, Ontario, Canada. Some Cheyenne operators have also boosted the speed of their airplanes by fitting them with cowl/ram air and exhaust stack aftermarket kits.

In addition, numerous panel upgrades have been developed for the Cheyenne II, including installation of lighter, more capable new-generation avionics from Aspen, Cobham (Chelton and S-TEC), and Garmin.