A stall at FL380 is an eye-opening experience

Since the crash of Air France Flight 447 in 2009, the flight training departments for all categories of jet operators have taken an introspective look at how to handle high-altitude stalls.

Since the crash of Air France Flight 447 in 2009, the flight training departments for all categories of jet operators have taken an introspective look at how to handle high-altitude stalls. You may recall that this flight of an Airbus 330 from Rio de Janeiro to Paris plummeted to the ocean after a thunderstorm encounter and loss of airspeed indications as a result of frozen pitot tubes. The pilots, faced with a multitude of warnings and false indications, pitched the airplane up into a high-altitude stall. The stall condition was not corrected and in minutes, the airplane fell 38,000 feet to the ocean in a nose-up attitude (see “Safety Pilot Landmark Accident: When Nothing Makes Sense,” March 2013 AOPA Pilot).

How could an experienced crew flying a modern airliner not recognize a stall? All pilots would like to say, “That’ll never happen to me,” but the humble pilot realizes that this was one of those cases where confusion reigned. It was likely a situation that none of the crewmembers had encountered before. Suddenly, their highly automated Airbus was crippled to the point of becoming a huge Piper Cub with an inoperative airspeed indicator. The stall protection system, which ordinarily does not allow an Airbus to be stalled, shut down as soon as the airspeed became unreliable because of the frozen pitot tubes. With erroneous airspeed indications, the pilot flying pitched up to avoid what he thought was an overspeed condition.

The multitude of warnings and conflicting information overcame the pilots, and basic airmanship was lost. The pilot flying held the control stick firmly back nearly the entire four-minute ride down to the ocean. This truly is a landmark accident that will be analyzed for decades to come.

At my annual recurrent training for the Boeing 737, my airline incorporated high-altitude stalls into the script. Traditionally in airline simulator training, stalls were introduced during your initial exposure to a new airplane, but not during recurrent training. And those initial stalls were done at a lower altitude, where the airplane had plenty of residual power to recover with minimal loss of altitude. We were trained to go to maximum power, maintain a relatively flat attitude, “respect the stick shaker,” and power out of the stall.

In the thin air at altitude, jets operate within a very narrow airspeed band between MMO (redline) and the low-speed limit, typically a yellow arc that provides a warning zone prior to a stall, indicated by a lower red line. At high altitudes and high weights, this band—known as “coffin corner”—can be quite narrow, leaving you a mere 10 knots of usable airspeed range, for example. Load up the wing in a turn and that lower redline will quickly move upward toward your airspeed. Making matters worse, at altitude the ordinarily powerful turbines are reduced to comparative slugs.

In the simulator, the instructor had us simply pull the power levers to idle at FL380 in level flight. He didn’t give us any instructions on how to handle the situation. That would come later. The 737 dutifully maintained altitude as the autopilot commanded, until the stick shaker warned of an impending stall. At that point the autopilot kicks off, and the drill is to firewall the throttles and try to recover.

I observed as my partner flew the recovery. You first notice that nothing happens quickly at this altitude. The engines seem to take forever to spool up. Meanwhile, the airplane feels as if it’s balancing on a basketball as the wing tries to get a bite of air to work with. When the wing stalls, the simulator bucks in protest. All the while, you’re falling 2,000 feet per minute or more.

Having already lost nearly 1,500 feet, the engines have reached maximum power but the airplane is so deeply behind the power curve that it makes little difference. The stick shaker is on about 25 percent of the time as my co-pilot gingerly tries to get back to normal flying conditions. Even a slight pull on the yoke results in that lower redline (stall) coming up to or through our current airspeed, bringing on the buffet—and shaker—again. Finally, with a loss of about 3,500 feet, the airplane is controllable, maintaining altitude and regaining speed.

Following some instruction on how best to recover, it’s my turn to stall the pig. The instructor recommends following the stall recovery cue (feathers) that appear on the attitude indicator during the maneuver, except to always keep the airplane symbol below the feathers. Once it touches them or goes above, the stick shaker fires and you’re bucking and losing more altitude. Even with a gentle touch, the gyrations can be wild. Granted, a lot of this monkey motion can be attributed to the simulator’s pitch sensitivity, but it’s still a regime that you clearly do not want to explore in the real airplane. 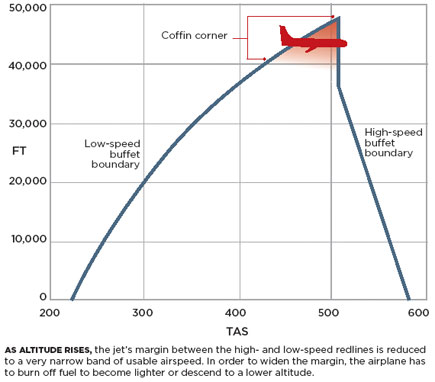 I finally got the airplane recovered with a loss of 2,700 feet, and that was knowing what was going to happen and with instruction on how best to recover. In a surprise situation, such as what occurred to the Air France pilots, it’s easy to see how this could turn into a disaster.

Was this training useful? Absolutely. Most eye opening was seeing how much of a dog the jet can be once it gets behind the power curve. In normal operations, for thousands of hours we never get to see this regime, so it was extremely valuable to experience it in the simulator. The ordinarily all-powerful jet is reduced to the performance level of a Piper Apache on one engine on a hot day. Throw in the all-or-nothing aerodynamics of a swept wing and it’s potentially worse.

Of course, the first step to avoid all of this is preventing a stall in the first place. Pardon the Monday-morning quarterbacking, but there was one thing the Air France pilots seemingly failed to do. Most pilots who fly one airplane a lot (aircraft owners and airline pilots, for example) get to know what power settings provide a certain speed at nearly any given altitude (see “Waypoints: Learned Along the Way,” page 16). For example, I know that at FL350, a power setting of about 80- to 90-percent N1 will keep my 737-900 flying squarely in the comfort zone at a 3-degree nose-up angle. Or set about 75 percent N1 to descend at 1,000 feet per minute at 1-degree nose up.

The Air France Airbus zoom-climbed from FL350 to FL380 with a substantial 12-degree nose-up pitch that resulted in a 1.6-G load. Every jet pilot should know that such performance is impossible to attain at that altitude and weight unless it was caused by weather (which may be what the pilot was thinking). Once the pitot tubes froze up on the Air France Airbus, the pilots’ basic knowledge of attitude and power settings could have avoided the abrupt pitch-up that led to the fatal stall.

How do you protect yourself from a high-altitude stall? Don’t fly above your airplane’s maximum altitude for a given weight. And don’t fly above the optimum altitude unless it’s a smooth ride with no waves. Lower altitudes provide a larger margin between MMO and stall speed, giving you far more usable airspeed to play with.

Finally, if an upset does occur, resulting in a stall, don’t be afraid to trade altitude for airspeed. No more trying to minimize altitude loss. You may need to aggressively lower the nose to get the beast back to flying speed again. That may require the loss of several thousand feet in the recovery.