Get the app Get the app
Already a member? Please login below for an enhanced experience. Not a member? Join today
News & Media Fighting for your freedom

Fighting for your freedom

When government agencies play fast and loose with pilots’ rights, AOPA fights back 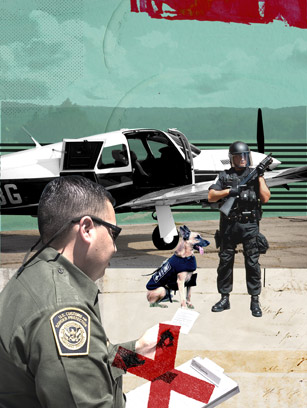 After a routine flight, you land at your destination, taxi to the ramp—and then you’re unexpectedly approached by more than half a dozen armed law enforcement officers, including a couple with rifles in hand. There’s a K-9 unit on scene, and the dog circles the aircraft several times.

The officers demand to see your pilot and medical certificates. You hand over the paperwork.

Then they demand to search your aircraft and luggage. They don’t have a warrant and they can’t seem to tell you why they want to look, so you say “no” to the search. The officers are clearly unhappy with your answer. If you don’t consent to the search, they’ll detain you for 48 hours, they warn. Still unwilling? They threaten to call a “buddy” at the FAA and have your pilot certificate revoked.

You can’t believe this is happening. Can they do that? What should you do? You relent and consent to the search.

You’re shaken, angry, and frustrated. And then, more than an hour after it started, it’s over. They’ve found nothing illegal. They let you go, still offering no explanation.

This sounds like a scene out of a Cold War-era spy novel. But the truth is worse; an AOPA member reported that this actually happened to him. And while this is the most egregious example, AOPA has received 42 reports of unwarranted stops from pilots nationwide, as well as many other reports of law enforcement officials visiting or calling airports and FBOs to check up on the activities of both local and transient pilots.

In each case, the pilot has reported being stopped by agents of Customs and Border Protection (CBP), or local law enforcement officers acting at CBP’s request. More recently, reports have come to light regarding similar stops by Immigration and Customs Enforcement Homeland Security Investigations (ICE HSI). The Department of Homeland Security is the parent agency of both CBP and ICE.

“This doesn’t look like the work of a few misguided agents,” said AOPA General Counsel Ken Mead. “It looks a lot like a federal agency that is routinely exceeding its mandate and acting outside its authority. The sheer number and geographic spread of incidents makes it appear there’s a systemic problem within DHS, and it needs to be addressed immediately.”

Although each report is different, dogs have sometimes been used, and in some cases pilots have been confronted by officers with their weapons drawn. In other instances, aircraft access panels have been removed; and pilots and passengers have been separated, questioned, and detained for as long as three hours.

Every one of these flights was conducted entirely within U.S. borders. In no case did the stops reveal evidence of illegal activity, and none of the pilots was charged with any crime.

In answer to the simple question, “Why was I stopped?” pilots have received a variety of vague and sometimes bizarre responses. They’ve been told they were stopped for flying too slowly, for taking an erratic flight path, for landing in a state where the sale of marijuana is legal, and for filing a flight plan in the air—among others. Some pilots have been told simply that the stop was routine or random.

An internal CBP memo obtained by AOPA refers to the stops of GA aircraft as “zero-suspicion seizures.” And that’s where the problem lies.

“We don’t object to law enforcement officers stopping and searching general aviation aircraft when they have a legitimate reason to do so—in other words, probable cause or reasonable suspicion of illegal activity,” said Mead. “But it’s our position that federal law enforcement officers have absolutely no authority to stop GA aircraft without meeting that legal standard. And all of these stops beg the question of where CBP is finding the resources to make these kinds of stops when budgets are so tight and they have an entire border to protect.”

AOPA has been investigating these reports and asking key questions, starting with, “What gives CBP—the agency charged with protecting our international borders—the authority to monitor general aviation activity within the United States, and then to stop and search domestic general aviation flights without probable cause or reasonable suspicion of illegal activity?”

The answer appears to be that the agency has no such authority. When pressed, the best the agency has managed to come up with is citing the federal aviation regulations, specifically 14 CFR 61.3(l) and 91.203. In case you’re rusty on your regs, the first requires that a pilot present his or her airman certificate and medical certificate, along with photo identification, to any federal, state, or local law enforcement officer who asks for it. The second requires that the aircraft carry airworthiness and registration certificates.

But while the regulations require pilots to have and present appropriate documentation, they don’t give law enforcement agencies the right to stop airplanes just to check that documentation. Instead, the law enforcement officers must have a reason and the authority to stop the airplane in the first place. Only then can they ask for the documents. And because these are FARs, the authority to enforce the rules rests entirely with the FAA. Agency representatives say they haven’t asked CBP or any other agency to conduct stops or document checks.

What’s more, there must be probable cause or reasonable suspicion of illegal activity for the officers to go beyond examining documents. Officers can ask pilots to consent to a search, but that consent must be given voluntarily, and the pilot can set limits as to the extent and duration. Warrantless searches can be made without pilot consent if the officers have reason to believe someone aboard the aircraft is armed and dangerous, someone hidden inside intends to impede or assault the officers, or the aircraft is carrying evidence of a crime or contraband such as drugs. That’s a fairly high standard to meet, and officers and agents involved in the reported stops don’t seem able to articulate the conditions they’re using to justify their actions.

With that in mind, AOPA has created a kneeboard-formatted page, “What To Do If Stopped by Law Enforcement.” Some pilots who’ve followed the guidelines—which are available online and which were inserted in the August 2013 AOPA Pilot—report that CBP agents who stopped them simply left when they refused to consent to a search. But that doesn’t make the stop itself any less of a problem.

The good news is that AOPA’s pursuit of this issue seems to have put CBP on its best behavior—at least temporarily. And although the number of new incidents has slowed since AOPA began asking tough questions, the association has received no satisfactory explanation for the incidents, or guarantee that they will stop for good.

AOPA and members of Congress want definitive answers, but thus far CBP has been less than cooperative. AOPA queries made under the Freedom of Information Act received only cursory, standardized answers. In one case AOPA was told that CBP couldn’t locate any records of a specific stop and search. But a local law enforcement agency involved in the stop did produce records, including a notation that the stop was made at the request of another agency.

“CBP and DHS have put up a lot of roadblocks, but these kinds of tactics won’t stop us from getting to the bottom of these incidents,” said AOPA President Mark Baker. “We’re working with our friends in Congress and we’re prepared to do what it takes to get answers for our members.”

When AOPA shared its concerns about pilots’ Fourth Amendment rights with GA advocates in Congress, they took action. Rep. Sam Graves (R-Mo.), co-chair of the House General Aviation Caucus, requested an inspector general investigation into the incidents by both the Department of Transportation (DOT) and DHS. The DHS Inspector General’s office said it doesn’t have the capacity to start a review now but will do so when resources become available. Graves has thus far received no formal, written response from the DOT Inspector General’s office, but his office has been in touch to see if the IG will launch an investigation in light of DHS’s refusal.

Additionally, eight senators—all members of the Senate General Aviation Caucus—sent a letter to the acting head of DHS demanding that the agency provide records of all CBP stops of general aviation flights since 2009. The letter, spearheaded by Sen. Pat Roberts (R-Kan.) and Sen. Jim Risch (R-Idaho), also demanded that DHS provide explanations of the “reasonable suspicion” that led to each stop and the “probable cause” that resulted in a search. DHS missed the senators’ deadline, so the lawmakers followed up, reiterating their demand for information.

Other members of Congress also have been involved after being briefed by AOPA, either writing their own letters to DHS and CBP officials or raising the issues in meetings with President Obama’s DHS and CBP nominees, who must be vetted by the Senate before confirmation.

With AOPA and Congress raising questions about CBP’s actions, the agency has moved to reclassify the records of its Air and Marine Operations Surveillance System (AMOSS) to exempt them from the Privacy Act, making them unavailable for public review. The timing seems suspicious, especially given the fact that AMOSS has been in existence since 1988 and, while some of its records have long been exempt from the Privacy Act, the move to expand those exemptions came about only after AOPA and Congress started investigating.

Baker and Mead are seeking face-to-face meetings with top CBP and DHS officials to discuss the incidents, but they warn that the whole thing may have gone too far to be resolved with simple discussions; a legislative solution may be needed. The association also is considering taking more forceful legal action.

“AOPA exists to protect the freedom to fly, and that includes ensuring that pilots are granted the same constitutional rights as everyone else,” said Baker. “We won’t let this go. We need answers—and certainty that the rights of general aviation pilots will be respected.”

AOPA is asking members who are stopped by federal or local law enforcement to report the incidents using AOPA’s online form.