Get the app Get the app
AOPA will be closing at 2:30pm ET Wednesday, November 23rd, and will remain closed Thursday and Friday in observance of the Thanksgiving holiday. We will reopen Monday November 28th at 8:30am ET.
AOPA Members DO more LEARN more SAVE more - Get MORE out of being a pilot - CLICK HERE
News & Media Cessna 180 Skywagon: Legendary popularity

Durability and reliability are more important than eye appeal 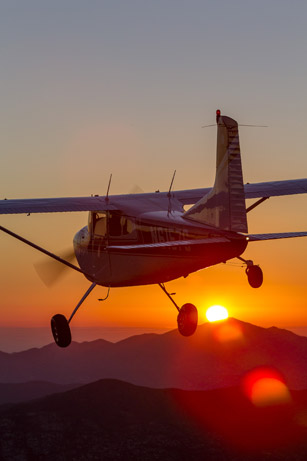 During the decade following World War II, the Cessna 170 was the world’s most popular four-place airplane.

The 145-horsepower taildragger, however, could not compete well against the speedier Beech Bonanza and North American Navion. This is when Cessna decided to take advantage of Continental Motor’s then-new, 225-horsepower O-470-A engine and develop the robust Cessna 180, which first flew in May 1952. (Beginning in 1957, horsepower was modestly increased to 230.) The Cessna 180 Skywagon is not a beautiful airplane, but it is a classic-looking taildragger that became an instant success. It became especially popular with those needing a lightweight, utilitarian airplane that could endure seaplane operations and feel at home using unimproved strips carved from the wilderness. The Cessna 180 went where tricycle-gear airplanes feared to tread.

In 1964, Geraldine “Jerrie” Mock, the “flying housewife” from Columbus, Ohio, used a 1953 Cessna 180 to become the first woman to fly solo around the world. Her airplane, N1538C, is on display at the National Air and Space Museum (see “Aviation’s Forgotten Pioneer,” April 2005 AOPA Pilot).

Nosewheels became the rage during the 1950s, and it was no surprise when, in 1956, Cessna substituted one for the 180’s tailwheel. The result was the Cessna 182, which cruised and climbed a bit slower as a result of the added drag. Today’s Skylane evolved to be much improved over the original.

Cessna also continued to develop its popular tailwheel design. In 1961 the company added more power to take advantage of the NACA 2412 airfoil’s load-carrying potential. The result was the Cessna 185, which at first had a 260-horsepower fuel-injected Continental IO-470 and in 1966, a 300-horsepower Continental IO-520. The more powerful Cessna 185 was identical to the Cessna 180 except for a strengthened fuselage; an additional window; an enlarged dorsal fin to help keep the additional power in check; and, of course, a significant increase in performance. The 300-horsepower Skywagon became one of the few airplanes that can carry a useful load greater than its own empty weight.

The pristine 1977 Cessna 180K on these pages is owned by Bruce Nelson, operations officer for the FAA’s Western-Pacific Regional Office in Lawndale, California. Nelson learned to fly in Alaska in 1984 but gave up flying after moving to San Diego in 1989. After experiencing the excitement of Alaskan aviation, the notion of flying with little more purpose than chasing after $100 hamburgers was not appealing. 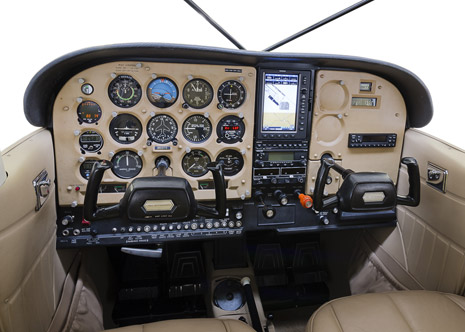 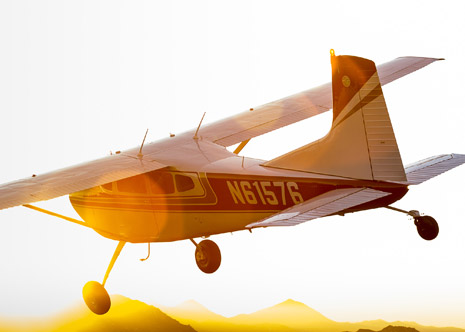 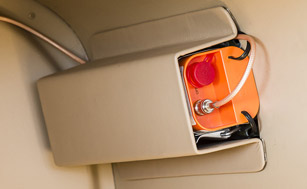 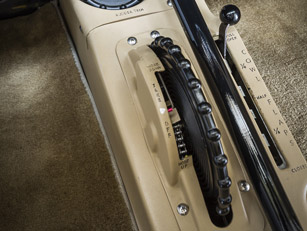 Nelson discovered a worthy purpose—volunteering his time and the use of an airplane to deliver food, clothing, and supplies to Christian missionaries at American Indian reservations in California, Arizona, Nevada, and New Mexico. In March 2007 he purchased an airplane eminently suited for that purpose and the rough-hewn strips he would encounter; he hangars his meticulously kept Cessna 180 at Zamperini Field in Torrance, California. In addition to flying for Wings of Faith Ministries, a Christian organization based in Corona, California, the 1,100-hour private pilot also plans to use his airplane to earn an instrument rating.

Most Cessna 180s eventually wind up on floats. Adding only 36 pounds to the empty weight, a seaplane kit includes the hidden hardware required to convert a landplane to a seaplane and the strengthening needed for the airframe to endure seaplane operations. The seaplane kit also includes corrosion-proofing that is added during construction, an advantage even for owners with no intention of flying floats. The kit also ups the maximum allowable gross weight from 2,800 to 2,950 pounds.

You can tell that Nelson’s airplane has a seaplane kit by the V-brace inside the front windshield, part of the added structural rigidity. It also has a longer, 90-inch seaplane propeller, which is much noisier than the normal 82-inch propeller. From outside the airplane, the seaplane prop has a furious snarl, similar to an outboard engine’s when its propeller is lifted out of the water after cresting a wave.

N61576 has a number of popular Cessna 180 modifications, including a Kenmore Air Harbor “up-gross” kit that strengthens the horizontal stabilizer and further increases allowable gross weight to 3,190 pounds (as long as the airplane has the larger dorsal fin). A Stene Aviation STOL kit adds wing cuffs that droop the leading edges, as well as aileron seals and redesigned wing tips.

The Cessna 180 was the first to have its fuel vent situated behind a wing strut, a feature found on every subsequent Cessna with strut-braced wings. This unique placement “hides” the vent’s forward-facing opening so that precipitation cannot enter—the strut acts as a form of inertial separator—and simultaneously provides positive pressure to the fuel tank. The main landing gear legs are taller than they look, which means that the cockpit floor is way up there. Climbing aboard requires a long first step to a boarding step and then giving yourself a heave.

Starting the carbureted Continental is unusually satisfying. The engine has a deep, throaty, authoritative sound, unlike any other Cessna. Taxiing the 180 is conventional for a taildragger with the usual caveats: sit high enough to see over the nose (or make S-turns along the taxiways) and be prepared to apply downwind rudder when the wind is abeam. A crosswind striking the large vertical tail causes the airplane to yaw into the wind, just like any other weathervane.

There is nothing noteworthy about the takeoff except that it doesn’t last very long. Lazy feet are a liability when departing in a taildragger. (The Cessna 185 is equipped with a manual tailwheel lock to assist the pilot in maintaining directional control during takeoff and landing.) As airspeed gathers, maintain a slightly tail-low attitude until the airplane leaves the ground. Rotation is unnecessary and the Cessna 180 simply levitates when ready. The airplane climbs so steeply at its best-rate-of-climb airspeed (81 knots) that you can’t see where you’re going. Unless high rates of climb are needed, a 100-knot climb speed is much more comfortable. Rudder trim is available for those who prefer using it.

Nelson selected an excellent airplane in which to train for an instrument rating, because the Cessna 180 is so stable. Pitch forces can be heavy. Steep turns require more muscle than you might expect, unless elevator trim is called to the rescue—not a recommended technique. But such nose-heaviness can be regarded as a safety factor. It is almost impossible to stall during a steep turn at maneuvering speed because of the high stick force required to induce the necessary G-load.

The Cessna 180 and 185 have trimmable (moveable) horizontal stabilizers that reduce the trim drag associated with conventional elevator trim systems. The trim wheel is on the floor between the seats and reaching it requires leaning forward. It makes a ratcheting sound when used and requires some effort to move, the result of trim friction that Cessna said was needed to prevent slippage of the horizontal stabilizer during high-speed flight.

Although seating is reasonably comfortable for the pilots, the rear seats are barely adequate for long trips. The airplane can carry six, but the strictly utilitarian bench seat in the far rear of the cabin is barely suitable for small children. Nor is the Cessna 180 particularly quiet. As a utility airplane, some soundproofing was sacrificed in favor of increasing useful load.

The manual flaps are operated with a long Johnson bar that rests horizontally on the floor between the two front seats when the flaps are retracted. Extending the flaps requires pulling up on the forward end of the handle, one notch for each 10 degrees, an arrangement that pleases floatplane pilots because it allows instantaneous and precise flap modulation during heavy-weight takeoffs from glassy water.

Raising the handle from the third to the fourth notch (to extend wing flaps from 30 to 40 degrees) when airspeed is greater than 60 knots requires a strong arm, the use of two hands, or assistance from someone in the right seat. Some prefer to simply land with only 30 degrees of flap deployment. 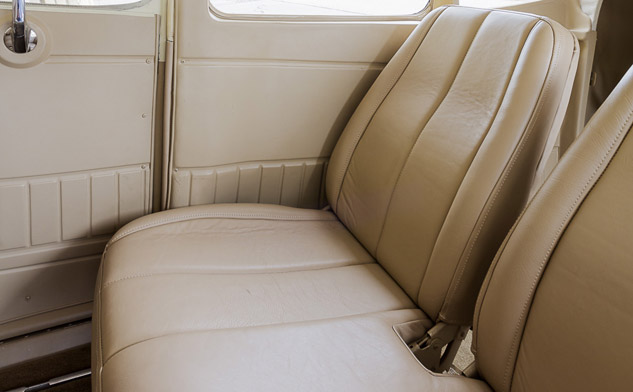 A conventional three-point landing is not particularly challenging, as long as you can see over the nose. Touchdown is made tailwheel first and with the control wheel as far aft as it can go. A premature touchdown on the main, spring-steel landing gear guarantees a bounce. More challenging is a wheel landing. My first “wheelie” in this airplane was my first in a Cessna 180 in more than 30 years, and it was not pretty The spring-steel landing gear lived up to its reputation. (Boing! Boing! Boing!) The secret is to avoid excessive airspeed and to use a velvet touch on the control wheel.

Perhaps the most difficult maneuver for new Cessna 180 pilots is a go-around from a low-power approach made with the flaps fully extended. The nose pitches up very insistently as power is added, requiring a hefty push forward on the control wheel with one hand and leaning forward to apply gobs of nose-down trim with the other—all while simultaneously notching up the flaps. The Cessna 180 pilot must cope with lots of strong, changing pitch forces, and proper execution of the maneuver takes practice.

More than 10,500 Cessna 180s and 185s were produced between 1953 and 1985, yet only a handful can be found at local airports. Cessna Skywagons don’t just fade away; they fly away—to remote corners of the world where the demand for them remains high and prices remain firm. Whether on floats, wheels, or skis, these brawny, high-wing Cessnas still have a reputation for being perhaps the best lightweight bush airplanes ever developed, durability and reliability being more important than eye appeal and speed.

Cessna had many improvements in mind for the Cessna 180 and 185, such as electric pitch trim, electric flaps, and an interconnected elevator trim/flap system to relieve heavy pitch forces. But bush pilots were adamant that Cessna not make such changes to these utilitarian aircraft. “Don’t screw up a great airplane,” they chorused. And Cessna never did. The Cessna 180 and 185 continue to enjoy a 60-year record of almost legendary popularity.