Mention aging aircraft and you’re tempted to think of the huge numbers of 30-plus-year-old piston singles and twins. There’s a vast fleet of decades-old twin turboprops out there as well, still giving good service. But some are getting a bit creaky. The thousands of older Beechcraft/Raytheon King Airs are a good example, and so are the 700-odd Garrett/Honeywell TPE-331-powered Twin Commanders still flying. 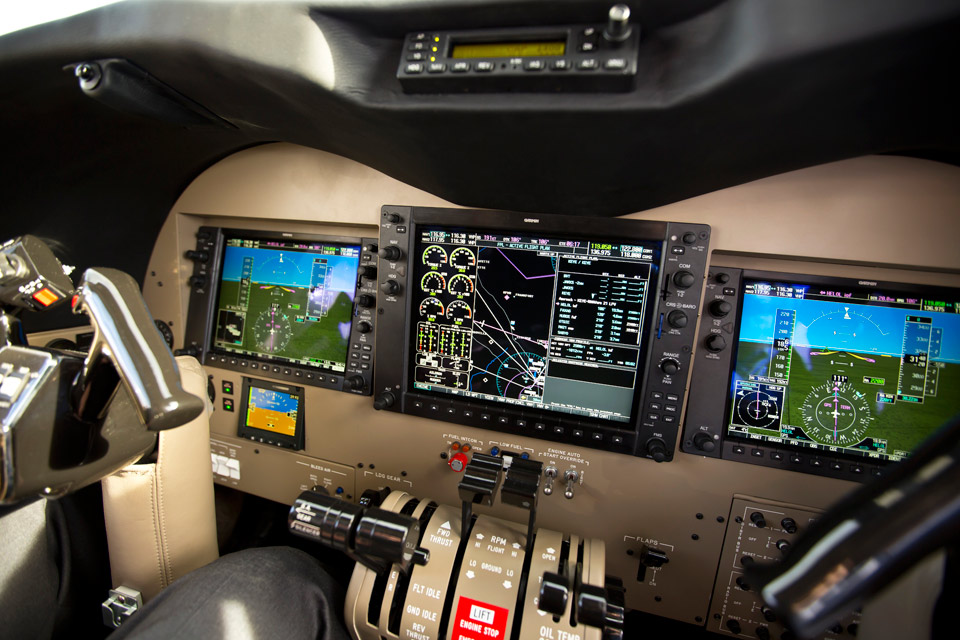 At altitude we sampled one of the optional features available under the STC. Garmin’s GSR 56 datalink unit allowed us to make telephone calls and send and receive text messages. Simply call up the appropriate page on the MFD’s AUX screenview, then use the keypad to enter telephone numbers or messages. Calls can be made through the pilot headsets or a handset. This feature uses the Iridium satellite system, which is also capable of calling up datalink weather anywhere in the world using Garmin’s GDL 59 datalink transceiver.

We let the 2100 fly us through a WAAS LPV approach, and course capture and guidance were exceptionally smooth. The 2100 even has an indicated airspeed (IAS) hold feature. So it was autoflight all the way to decision altitude. All we needed to do was lower the gear and flaps, then adjust power to 30 to 32 percent torque to keep us at the target initial VREF of 120 knots.

So here’s one more example of how Garmin’s G1000 technology is expanding its market share. Hagans believes the G950 STC could capture 40 percent of the Twin Commander fleet. After all, it’s already installed in Piper Meridians, King Airs, Beech 1900Ds, Citation 501s, and Swearingen Metro IIIs, so the program is on a roll.

Pilots get confused when they hear of the G950 system, so here’s a clarification. The G950 is identical to today’s G1000 with one big exception: it isn’t equipped with Garmin’s GFC 700 autopilot and integrated flight control system. The G950 is essentially a G1000 produced for aftermarket retrofit, in airplanes that have autoflight systems built by other manufacturers. You could think of all “G1000s” delivered before Garmin came out with the GFC 700 as G950s in spirit. Airplanes with this setup include earlier Cessna piston singles that used King KAP 140 autopilots. Ditto the Diamond DA42, or the earlier Piper Meridians with Meggitt MAGIC autoflight systems.

So when you hear “G950,” think retrofit. It’s just that Garmin came out with that marketing handle after it built its own flight control system. —TAH 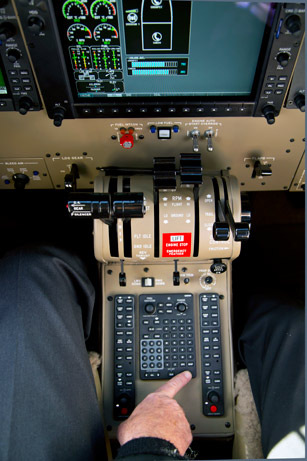 And why not? The G950 gives owners a huge list of improvements. For one, the displays and autopilots in many Twin Commanders equipped with Meggitt/S-Tec MAGIC digital flight control systems (the Meggitt and S-Tec lines are now owned and marketed by Cobham) are proving to be difficult and expensive to service. MAGIC primary flight and navigation displays are in short supply, and repairing a single screen can cost $5,500; fixing all six screens can set you back about $14,000.

to the MAGIC’s air data attitude and heading reference system (ADAHRS) are said to run as high as $12,000 and take up to 17 days—and there are reports that these units are difficult to find.

Crew alerting system (CAS) messages, which appear in a corner of the PFD, deserve a special mention. As part of the STC, the colors and aural tones are standardized. Messages are either white (advisory), amber (caution), or red (emergency—immediate action required). Standard airplanes came from the factory using a hodgepodge of colors, the meanings of which could vary from model to model and year to year.

“We want to get away from OEMs having limited or no parts runs, and having no loaner parts—which forces us to cannibalize parts from other aircraft,” Hagans said.

The demonstrator flown for this article was a 1985 Commander 1000 with the latest Cobham IntelliFlight 2100 digital flight control system, which helped keep the price down on this particular installation (buying a 2100 for a non-Meggitt/S-Tec/Cobham airplane would have tacked $55,000 onto the invoice). The G950 installation was clean and uncluttered, and included a new panel, glareshield, and center console design.

As with the G1000, flight plan and other data are entered via either the push-and-turn method, using the concentric rotating knobs on the display screen bezels, or with the console-mounted keypad. For takeoff the drill is to pull up the command bars using the left thrust lever’s go-around button, sync the heading bug to the runway heading after lineup, apply power, and off you go. Rotate at 90 knots, pitch 10 degrees nose-up, and you’re climbing away at 3,000 fpm doing 170 knots.

Pilots who fly them, or who have had a taste, are big fans of the Twin Commanders’ speed (up to 300 knots), range (up to 2,000 nm), and hauling capability. Older versions were on the verge of obsolescence in the early 1990s, when an airworthiness directive required that early 690A and 690B models have their spars inspected for corrosion. If any was found, repairs to the spar caps were mandated. Fortunately, the Twin Commander Aircraft Corporation (TCAC), one of the most proactive of the owner’s groups—TCAC even bought the Twin Commander type certificate, and presides over a Twin Commander service center network—came up with a service bulletin that dealt with the issue.

Today, customers still like the performance of the Twin Commander. But they also want the latest avionics—not the steam-gauge cockpits of yore. Some pilots stepping up from less-powerful airplanes (and yes, this includes those flying Cirrus and other high-end piston singles) are responding well to the Garmin G950 avionics suite now available under a supplemental type certificate developed by Garmin and Eagle Creek Aviation Services. ECAS, under President and CEO Matt Hagans, services a whopping 85 percent of all Twin Commanders. And so far, ECAS has sold eight Twin Commander G950 upgrades. The STC is available at all 13 TCAC service centers.

“This upgrade is a lot more than just a nice new glass panel,” Hagans said.
“It extends the airplane’s life; boosts utility; makes the airplane more reliable, easier to dispatch, less expensive to own, and safer.”

The G950 conversion’s average installed price is in the $350,000 range, but with all the options—airborne weather radar, electronic charts, synthetic vision, TCAS I, backup instrumentation, and much more—prices can top $400,000. Down time runs approximately eight weeks. While this may sound expensive, Hagans claims that the boost to resale value is dollar for dollar. 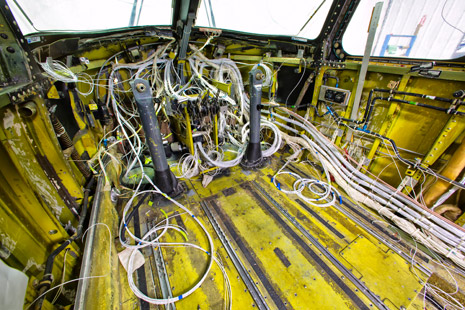 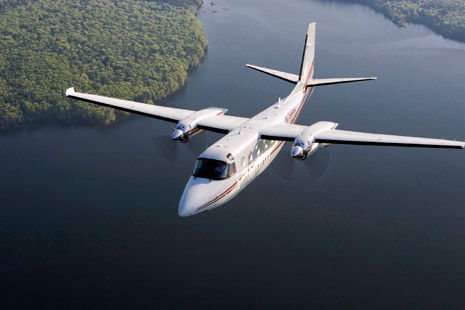 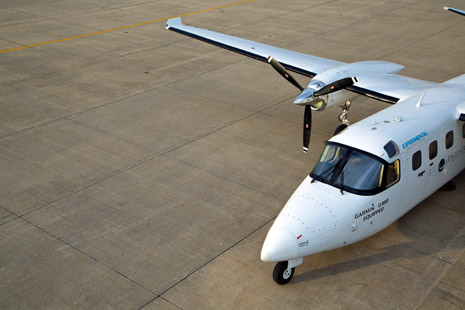 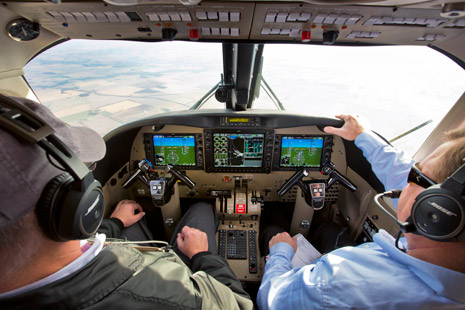