Get the app Get the app
Already a member? Please login below for an enhanced experience. Not a member? Join today
News & Media IFR Fix: Next exit 4,000 feet

Best, there’s no CFII aboard, banning automation, failing radios, obscuring instruments with silly rubber discs. Sometimes he even makes you perform operations irrelevant to IFR, like that last proficiency check’s spot landing—talk about something out of the blue. Not pretty.

For the ILS RWY 15 approach you will fly today, you recall from your last visit the vectors for arrival from the southwest on your assigned 060-degree heading. First comes a turn to 090 degrees, then 120 degrees (give or take, for wind), then approach clearance, and localizer intercept. So it’s an eyebrow-raiser when the first vector takes you north, not east. (Mental note: Discuss this later with the absent CFII.)

Maybe traffic is the reason. Two aircraft are ahead of you for the ILS; frequency chatter suggests that somebody down there dawdled exiting the runway. Now things are backing up. Trailing you, another aircraft is moving into the flow, a Jetstream (whatever that is, but sounds fast).

Now ATC assigns vectors taking you through the localizer to re-intercept from the other side. Approach notifies the Jetstream that it is to follow a Cessna single "that will be keeping its speed up."

A quirky thing about this former Air Force base’s Runway 15: The first taxiway is 4,000 feet from the end. That worked fine for B-52s back in the day. For your single, touching down among the tire streaks just past the numbers will leave you a long taxi.  The CFII harped on being aware of such airport features because "someday, somewhere, there will be a big, fast airplane hot on your heels."

You are cleared to land. "Keep your speed up, no delay on the runway."

Jetstream or not, your single has proper landing and taxiing speeds. But, it’s necessary not to prolong the process. You decide to plan to touchdown much closer to that first taxiway than usual, delaying final deceleration and configuration until very short final.

Hitting your touchdown spot just right and exiting the runway promptly at a safe taxi speed brings appreciation from the tower and the Jetstream (a transport-size turboprop).

Mental notes: Thank the CFII for adding "irrelevant" tasks to instrument proficiency sessions, and for insisting that you study diagrams of the runways you use. 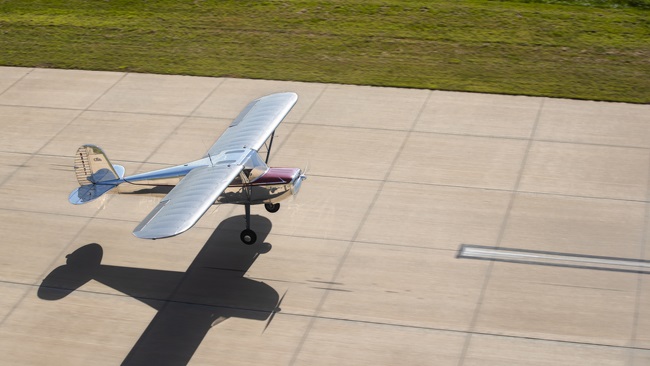