Illinois pilot Keith Baird was climbing into blue skies, with no inkling of trouble until a flight of four Canada geese suddenly appeared dead ahead, heading in the opposite direction.

“I had less than half a second between seeing them and impact,” said Baird, recalling in a telephone interview the Dec. 28 flight with a friend on board—Norman Frees, who had never flown with Baird before. “It really was reflex to duck and close my eyes as the impact happened.”

Both men reflexively ducked as the goose blasted into the cabin about 39 seconds into the flight, roughly 400 feet above the ground. The impact, captured by a GoPro camera that Baird had just received as a Christmas present, punched a large hole in the windscreen and doused Baird and Frees in feathers and blood. In the very next instant, even before the facts of the situation began to sort themselves out in his head, Baird’s training kicked in.

“Aviate, aviate, aviate. That’s all you need to do,” Baird said. “Just fly the airplane.” 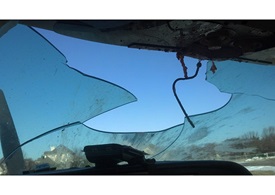 First things first: He had a positive rate of climb, and the airplane was still flying. The wind, with no exit available, was not rushing through the cockpit. “It’s not a wind tunnel by any stretch,” Baird recalled. He noticed his hands were covered in blood. Baird did not know whether some of it was his own, or how badly injured he was. (He was uninjured, though the video footage, watched later in slow-motion, captured the impact of the flying compass against Baird’s head.) 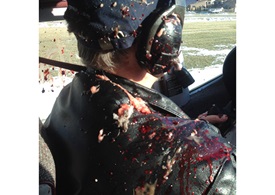 “I don’t know how much useable consciousness I have left,” Baird said of the seconds following the impact. As it turned out, neither Baird nor Frees were hurt, and Baird set to work making sure the goose was the only casualty. He lowered the gear and reduced power to avoid speeding up and testing the strength of what was left of his 1968 Cessna 210’s windscreen. He prepared to return to Brookeridge Airpark in Chicago’s western suburbs, from where they had just departed.

Aviate… Navigate—there was no decision to be made there, Baird noted: He just needed to return to the runway and land. Communicate—the unicom call could wait, though he would announce his return in due course, lest another pilot take the runway unaware of the returning Cessna. Baird said a more pressing concern was making sure the prop had not been damaged and thrown out of balance, a condition that would require a power-off landing.

In about 2,700 hours of flying over nearly three decades, Baird, 56, had never hit a bird before.

“The plane actually flew no differently,” Baird recalled. “It was just loud.” 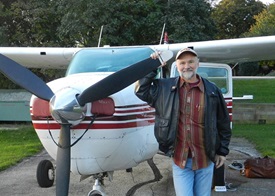 A clinical psychologist whose practice includes counseling patients with a fear of flying, Baird said pilot training (including many years of using Air Safety Institute training products) made his responses virtually automatic. The mantra of “aviate, navigate, communicate” worked as intended.

“The amazing thing, though, is when you over-learn it, it shows up in your head when the [expletive] hits the fan,” Baird said. “It was right there… in an emergency it overpowers brain lock.”

The balance of the flight was as routine as a flight can be under the circumstances.

Baird’s YouTube video, posted Jan. 10, had surpassed 250,000 views by Jan. 16, and Baird has given interviews to a growing list of media outlets, taking pains to make sure reporters get the message that general aviation pilots train and prepare for such emergencies, and the outcome was a product of that training and preparation, a series of nearly automatic responses. Baird said Frees looks forward to another sightseeing flight.

Baird said his future flying will be informed by a couple of lessons learned on Dec. 28. For one, he is accustomed to scanning for traffic at typical pattern altitudes, not skeins of geese approaching the departure path at 400 feet. That scan, Baird said, will be adjusted, along with his longtime practice of flying below 3,000 feet on VFR sightseeing trips. Research since that day has informed him that about nine in 10 bird strikes happen below 3,000 feet, Baird said.

For all of that, Baird said he is not particularly anxious about future encounters, despite the fact that the outcome could have been much worse. The bird hit near the center of the windscreen, and that was a lucky break: A few inches to the left, and Baird would have suffered a direct hit that could have injured or killed him. He has watched the video many, many times, marveling at his good fortune.

“That really was a little closer than I thought to injury,” Baird said. “We just were fortunate where it struck the windscreen.”

Baird said he has no lingering anxiety over the bird strike, no concern about future flying (though he will be a bit more careful about scanning for unusually low traffic, and maintain higher altitudes). As for the video, Baird said it is likely to be more useful to pilots—reinforcing the need for caution and the value of training for emergencies—than to patients who fear flying.

“I’m not sure how this video is going to work in that scheme,” Baird said with a chuckle.