As AOPA continues to plan for six fly-ins and the AOPA Homecoming Fly-In in 2014, members are weighing in on the series of events that will replace the Aviation Summit.

“It seems that there is no way to please everyone. This is a great start and I look forward to attending several events. I look forward to cruising at 80 mph for a few hours,” said AOPA Online commenter TJONESFLY.

Commenter Mavrick1 noted that the new regional events were organized so that pilots can fly in and meet local pilots and interact with AOPA staff. “This will encourage local flying, [which] equals growing the pilot population. Not everyone can fly a single-engine aircraft to the annual AOPA expo. Great start AOPA, and maybe other airports will participate next year.”

CessnaPilot expressed happiness that the Frederick fly-ins are returning: “I understand that it was largely a 'local' event, so having more than one of them is great, and definitely more applicable and approachable than the "expo" type events AOPA has been having lately.”

“I think this is a good initiative to reach a broader cross section of the membership. More people can afford and find time for a day or two adventure than the better part of a week to do the single event. I am sure the leadership could consider rotating the cities to touch other areas that are missed in this first pass,” wrote AOPA member 01316154. “I look forward to attending the Indianapolis event as I live in Louisville and appreciate the change in venue.”

One of the biggest concerns was what members perceived as a big gap in the middle of the country. “[This is an] excellent regional start. I would really, really like to see a 'mid-coast' fly-in, possibly Grand Junction, Colo., or one of the Denver/Colorado Springs airports,” wrote Jer Eberhard.

On Facebook, Kris Lichter pointed to AOPA's own map of the events showing the “obvious gap” in the high west. “With all the passionate aviators based there, the money for one of the other eastern events might've been better applied in Colorado or Utah. But it is true there's no pleasing everyone, and I'm sure the events will be very good,” said Lichter.

On Facebook, Kimberly Bush used an analogy from her nearly 90-year-old Aunt Mae about family reunions. "Some will make it from China and some won't walk across your back yard to get there,” she wrote. “This seems to be a new initiative based on feedback from the membership.”

This is AOPA’s inaugural year of fly-ins, and a whole new crop of airports will be chosen for 2015.

“We are looking into developing a proposal or application process for local airports and AOPA members to collaborate on recommending their airport for the 2015 or 2016 fly-in program,” said Chris Eads, AOPA director of outreach and events. “By formalizing our approach, we hope to create community involvement that can create some exciting options for us, and give our members a voice in where we head next.” 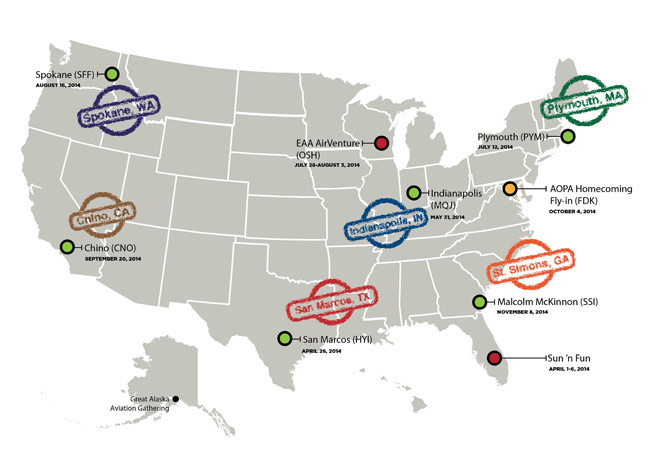