Get the app Get the app
AOPA will be closed July 4th, in observance of the Independence Day holiday. We will reopen at 8:30 am ET on Tuesday, July 5.
News & Media Quick Look: King Air B100

A Plan B concept

As the proverb says, “Necessity is the mother of invention.” 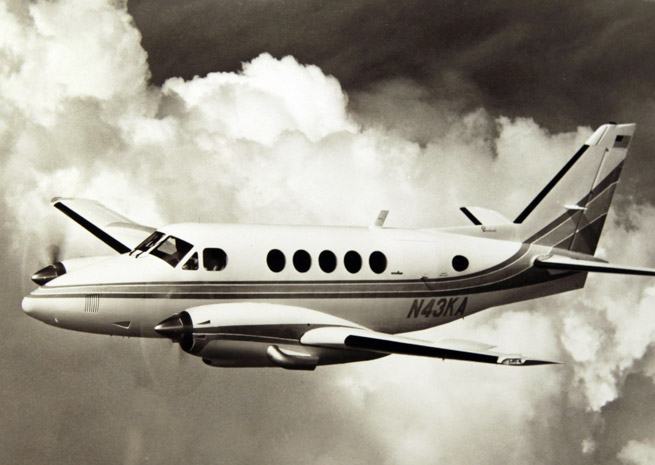 As the proverb says, “Necessity is the mother of invention.” So when a mid-1970s strike at the Pratt & Whitney Canada factory halted delivery of PT6A engines to Beechcraft, the airframe manufacturer—which had been concerned about relying on a single powerplant supplier for its entire line of King Air twin turboprops—developed a Plan B: the Garrett TPE331-powered King Air B100.

The B100 cabin typically is configured with seven seats, including a belted lavatory seat, and has a baggage compartment located aft. Collins Pro Line avionics were offered as standard equipment on the B100, although some buyers opted for Bendix Gold Crown equipment. The cockpit also included a Sperry SPZ-200A autopilot and Sperry Primus 300 weather radar.

Although the B100 has the same fuselage as the A100 and the Super King Air 200, the B100 had a higher gross weight (11,800 pounds) than the A100 and offers some modest performance advantages over its Pratt & Whitney-powered counterpart. Initially, the TPE331-6 was not as reliable as the PT6; however, Garrett’s successor companies—AlliedSignal and Honeywell—have markedly improved the engine since its introduction.

Some B100 operators who wanted better hot-and-high climb and cruise performance have had their TPE331-6 engines converted to the -10 standard by National Flight Services, which also can install McCauley five-blade props, cabin soundproofing, and winglets on the aircraft.

Raisbeck Engineering also offers a number of performance-enhancing mods for the B100, including dual aft-body strakes, which reduce drag and noise; high-flotation landing gear doors, which improve climb and cruise performance and protect wheel wells, tires and brakes from the elements; and nacelle wing lockers, which provide more baggage space while reducing drag.

Lakeland, Florida-based Executive Wings has partnered with McCauley Propeller to offer the five-blade Blackmac propeller upgrade for the B100, which reduces cabin noise, increases climb rates, and includes a state-of-the-art deice system. Most recently, some B100 operators have retrofitted their aircraft with Garmin avionics.