Get the app Get the app
AOPA will be closing at 2:30pm ET Wednesday, November 23rd, and will remain closed Thursday and Friday in observance of the Thanksgiving holiday. We will reopen Monday November 28th at 8:30am ET.
AOPA Members DO more LEARN more SAVE more - Get MORE out of being a pilot - CLICK HERE
News & Media Alton Bay ice airport opens for 2014 season 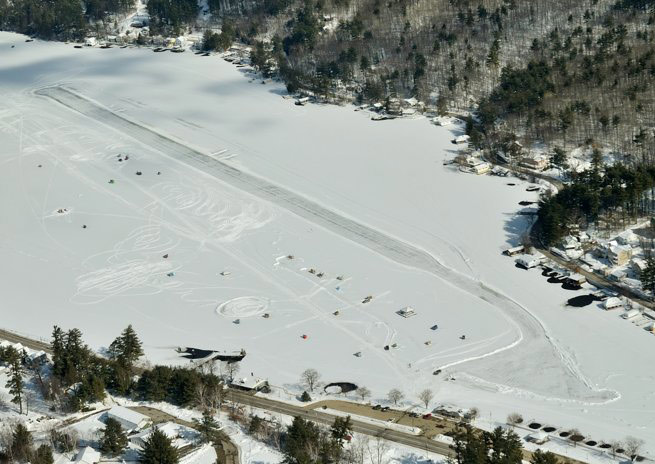 The return of cold weather to New Hampshire allowed the Alton Bay ice airport—a seasonal public-use facility on Lake Winnipesaukee, at the charted location of the Alton Bay Seaplane Base (B18) in Alton Bay, N.H.—to open late Sunday, Jan. 19, for the 2014 season, according to the airport’s volunteer manager, Paul LaRochelle. 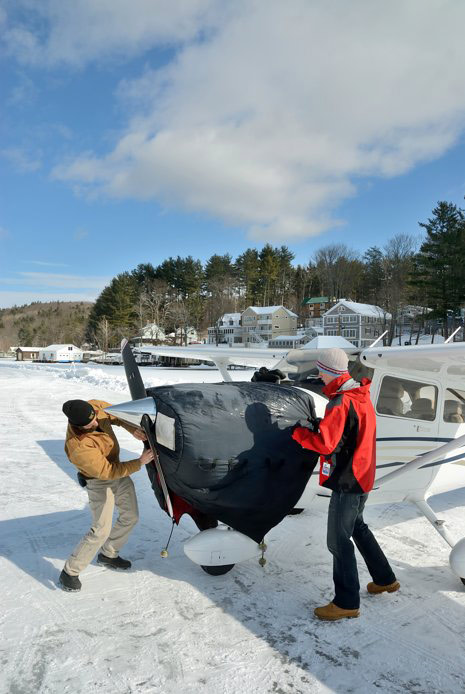 “We had a lot of snow, and cold temperatures—then it got warm,” he said. “All the snow melted on top. We had water on the ice.” On Sunday LaRochelle was able to plow Runway 1/19 for the first time, and four airplanes landed Monday—and a couple more Tuesday, he said on Jan. 22 when a strong northerly wind may have kept pilots on the ground.

On Tuesday he plowed a 40-foot-wide taxiway on the east side of the 2,600-by-100-foot runway. “The surface is a little bumpy in some spots, but not too bad,” he said. The ice is about 14 inches thick.

Jan. 10 is the earliest the ice runway has ever opened, LaRochelle noted. “Hopefully we’ll have a good season.” The runway has to close by March 15, but the season will end earlier if conditions deteriorate.

LaRochelle updates the airport’s information line (603/875-3498) every couple of days, and reminds pilots to check notams before departing—if the runway must be closed temporarily, a notam often will be issued before he can update the recording. Upon arrival, look for the windsock—and an American flag—on top of the bandstand in the middle of the lake. Winds usually favor Runway 1, which also is the preferred calm-wind runway. “If it’s really slick, it doesn’t hurt to grab some ice cleats for your shoes,” he noted.

Most pilots drop in for a bite to eat. Four restaurants are open within walking distance: Amilyne’s Corner Market and the Olde Bay Diner serve breakfast and lunch, while J.P. China and Shibley’s at the Pier—closest to the aircraft parking area—are open for lunch and dinner. If the weather is good for Alton Bay’s Winter Carnival, scheduled for Feb. 16, expect the parking area to fill. 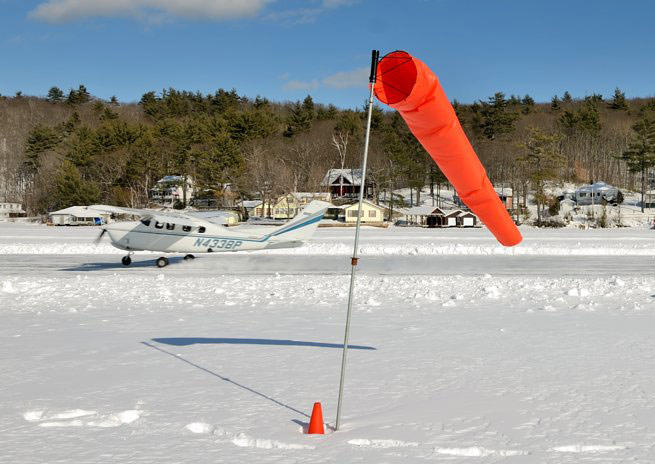 While you’re in Alton Bay, stop at Facet Jewelers—at Shoppes on the Bay, next to Olde Bay Diner—and LaRochelle’s wife, Donna, will give you a free certificate for landing on the ice at Alton Bay. B18 baseball caps are available for purchase.

The ice airport has operated for more than 30 years, and was the subject of a January 2010 AOPA Pilot feature, “The Iceway is Open.”

Technical Editor
Mike Collins, AOPA technical editor and director of business development, died at age 59 on February 25, 2021. He was an integral part of the AOPA Media team for nearly 30 years, and held many key editorial roles at AOPA Pilot, Flight Training, and AOPA Online. He was a gifted writer, editor, photographer, audio storyteller, and videographer, and was an instrument-rated pilot and drone pilot.
Go to Mike Collins's Profile
Topics: U.S. Travel, Travel, Weather