Get the app Get the app
AOPA Members DO more LEARN more SAVE more - Get MORE out of being a pilot - CLICK HERE
News & Media Mentor Matters: When not to go around

Mentor Matters: When not to go around

Once the wheels are down, the go-around decision becomes critical

The most common types of accidents experienced by light jets are approach and landing accidents (ALA); in turn, the largest subset of ALA that occurs is the runway overrun. 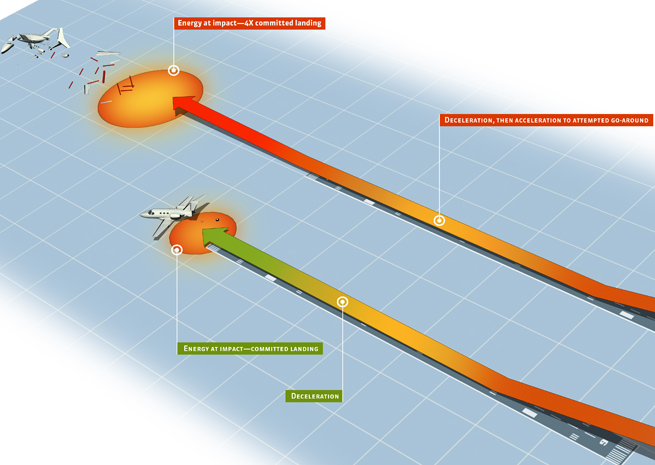 The most common types of accidents experienced by light jets are approach and landing accidents (ALA); in turn, the largest subset of ALA that occurs is the runway overrun. As jets tend to be less forgiving of excess speed on landing than their propeller cousins—and have a more difficult time shedding excess altitude and speed—it’s understandable how a poorly executed approach can lead to the pilot finding himself quickly running out of runway.

Historically, many pilots in this situation realize the aircraft will not stop before the end of the runway, and make what is often a fatal decision—to attempt a go-around from the runway once deceleration has begun. For one common type of light jet that has been in production for decades, more overrun accidents occurred after attempting a go-around from the runway than occurred during a “committed landing.” During the events where the pilot did commit to landing, all injuries were reported by the NTSB as either minor or none. The only events with serious or fatal injuries were those where the pilot initiated a go-around once on the runway.

It’s not hard to understand why a late go-around can be such a hazardous maneuver; an airplane may be moving more than 200 feet per second after touching down from a fast approach. Every second the pilot ponders what to do, or is unable to accelerate while the engines spool up, he could be eating up as much as one-tenth of the remaining runway. This can be a very dangerous time to attempt anything other than a maximum-effort stop. Further consider that an airplane that exits the runway at 50 knots after making the best effort to stop has not one-half, but one-quarter the energy of one that has attempted a go-around and departed the runway end at 100 knots.

As an excellent case study, in the last decade two very similar accidents occurred at Carlsbad, California. Both events involved lights jets landing on 4,897-foot-long Runway 24 and both shared several details—a light tailwind, excess speed crossing the threshold, and landing beyond the target 1,000-foot markers. The difference lies in the actions of the pilots once the airplane touched down long and fast.

In one case the crew attempted a go-around from the runway, struck a localizer antenna platform, lost control, and all people on board perished. In the other accident, the pilot committed to the landing even though he realized that stopping before the end would not occur; none of the four occupants was injured. Of the two aircraft, the first had the better thrust/weight ratio, and landed with more kinetic energy that could be converted to lift. Additionally, it was flown by a two-pilot crew who could better split the high workload of a runway go-around. Yet it was unable to execute the go-around, with tragic results.

At the end of the day, every situation must be considered individually. But just to get to the point where a from-the-runway go-around is required, the pilot has likely already made two large errors—one in continuing an unstabilized approach, and the other in not conducting a go-around when it became clear the necessary touchdown point would not be obtained. So having messed up twice, is it reasonable to think that the pilot will make a clearheaded, correct decision? Not likely, and the accident records suggest the better policy is that unless the go-around was initiated before touchdown, once the wheels are down, the airplane stays down.