Coast to coast for animal rescue

Flight is one for the (log)books

Phillip Angert’s very first animal rescue flight was a bit unusual, even by pilot standards. The New York, N.Y., tech designer flew 2,000 nautical miles in a coast-to-coast odyssey that drew national attention as he attempted to deliver one small dog to a new home.

Months in the making

Angert had been trying to coordinate an animal rescue flight for months, but hadn’t been able to make it happen. He decided to plan a cross-country trip—one with “purpose and intention”—and would transport dogs to any stop along his intended route. Departing on Dec. 28 from Old Bridge Airport (3N6) in Old Bridge, N.J., Angert had no takers as he headed southwest via Tennessee, Arkansas, and Texas. Rescues were looking for transports headed in the opposite direction: Washington to Kansas; Los Angeles to New Mexico; Texas to Virginia. 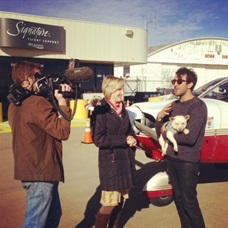 Approximately 4 million healthy dogs and cats are euthanized each year in the United States because they are no longer wanted or are lost and taken to shelters, according to Pilots ’n Paws. The nonprofit organization matches pilots with animal rescues seeking to remove pets from high-kill shelters in the hopes that they can be adopted.

Angert took a side trip to Tampico, Mexico, conducting his first border crossing, and returned to the United States. While in Los Angeles, “All this magic started,” he said. A Pilots ’n Paws volunteer stepped in to pull a Chihuahua mix named Yoshi from a high-kill animal shelter in Moreno Valley. By all accounts, Yoshi was to be euthanized within hours. The volunteer drove the dog to Corona Municipal Airport (AJO), where Angert had stopped to visit Aircraft Spruce.

Angert hadn’t flown with any dog other than his own and was concerned that Yoshi might be frightened. After taking off from Corona on Jan. 14, he checked on the dog in its crate in the back of the Cherokee. “You could see in his eyes, he knew he was safe,” Angert said.

As the pair traveled from California to Arizona, New Mexico, and Kansas, they received media attention wherever they stopped. “Throughout the trip, it got more and more press, and I used that to be a spokesman for [general aviation],” Angert said.

Snow and ice storms began popping up in the Midwest as they progressed, requiring an overnight stop in St. Louis and a detour to the south. Angert and Yoshi touched down at Harrisburg, Pa., on Jan. 16. Another rescue volunteer was there to greet them. She has received several applications to adopt Yoshi, Angert said.

The long, long cross-country has inspired Angert to look for more animal rescue opportunities. He also plans to fly four or five more coast-to-coast flights and also wants to fly to Europe. The successful mission was gratifying for Angert, who became a private pilot in 2010 and flew the trip VFR. “It built my confidence level up and I started feeling really tuned up with my flying and skills,” he said.