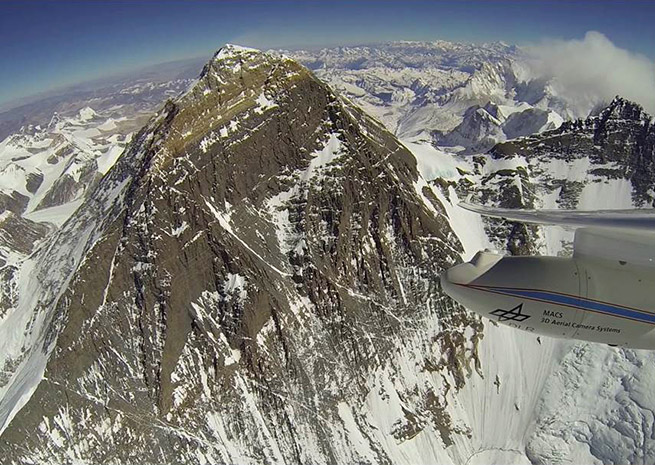 A Stemme S10 motor glider launched from Nepal into the Himalayan heights on Jan. 23, capturing the first of many images that an international science team hopes will save lives.

Mounted below the right wing, a sophisticated camera system developed for extreme environments by the German Aerospace Center (Deutsches Zentrum für Luft- und Raumfahrt; DLR) captured images that will be used to build a 3-D model of the mountains and snowpack, allowing forecasters to better predict flash floods and landslides that can wipe out entire villages in Nepal.

“We shot first-class, multi-spectral images with a resolution of 20 centimetres (7.9 inches) at an altitude of 6400 metres (21,000 feet) above Khali Gandhaki Valley,” said Jörg Brauchle, who is leading the DLR contingent, in a press release describing the Jan. 23 first flight. “The optical data provided by the camera could not be better for 3D modelling of mountainous regions.” 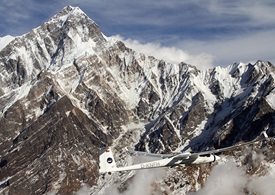 The photo survey is the first of its kind over the region, and is scheduled to continue for weeks. DLR is supporting the Mountain Wave Project in this effort, a continuation of research flights that have seen gliders climb mountain waves into the lower stratosphere, topping 41,000 feet over the Andes in 2006 for atmospheric research. The Mountain Wave Project holds a variety of glider altitude and distance records, and continues to gather data for atmospheric and physiological research. 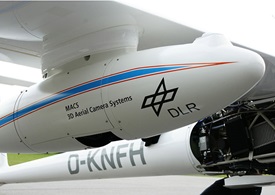 “Originally, the Mountain Wave Project was founded to research the wave systems in high mountainous regions and their dreaded vortex with horizontal axis of rotation, known as rotors," said MWP founder and glider pilot René Heise, in a press release. “But now we are also researching what goes on in transport from the troposphere to the stratosphere, and are analysing atmospheric turbulence, ultimately aiming to improve weather forecast systems and climate modelling.”

DLR, in its news release, noted the flights are “phenomenally challenging for pilots.” Just getting to Nepal was a challenge in itself, with a pair of Stemme S10s flying for weeks to traverse the Middle East, Pakistan, and India to reach their current operating base in Nepal. 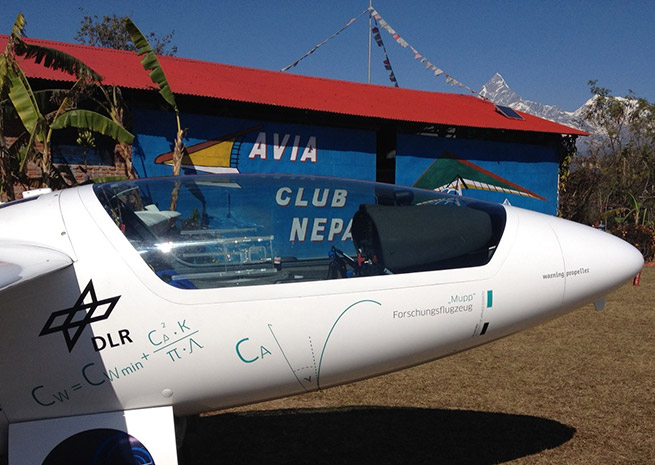 German pilot Klaus Ohlmann and co-pilot Jona Keimer laid claim to being the first to fly a motor glider over the summit of Mount Everest, reaching 29,028 feet msl after a 90-minute climb from their operating base in Nepal.

"The conditions were ideal, despite the wind speeds at the summit of Everest, which neared 100 kilometres per hour (62 mph)," Ohlmann said in Jan. 31 a news release from the German Aerospace Center (DLR), which built the camera system being used by the Mountain Wave Project to conduct a detailed survey of the region. “The almost turbulence-free slope updrafts helped us ascend quickly."

The news release includes a video of the Jan. 28 flight, and detailed 3-D images of the terrain will be processed and ready in a few weeks, DLR noted.