Get the app Get the app
AOPA will be closed July 4th, in observance of the Independence Day holiday. We will reopen at 8:30 am ET on Tuesday, July 5.
News & Media Star-studded homage for Bob Hoover 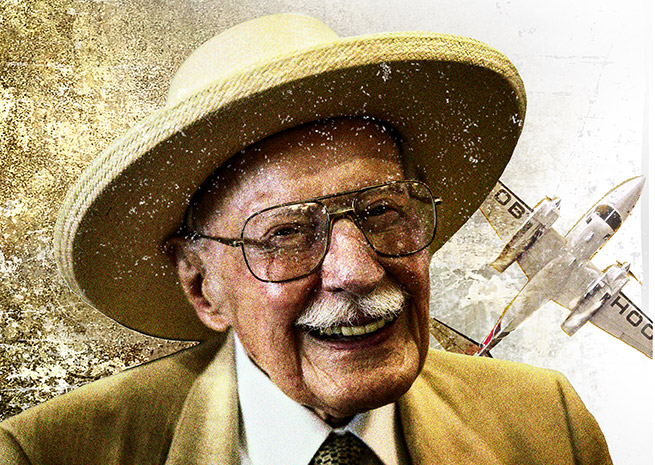 Astronauts, pilots, and other aviation greats, each renowned in their own right, have joined forces to pay tribute to living aviation legend R.A. “Bob” Hoover in February, a series of events culminating with a tribute dinner at Paramount Studios that is nearly sold out.

The Feb. 21 Tribute to Bob Hoover will include the premiere of a new documentary about Hoover’s extraordinary life and aviation career narrated by Harrison Ford, who will be among those hosting the event—along with Apollo astronauts Jim Lovell and Gene Cernan, “Miracle on the Hudson” captain Chesley “Sully” Sullenberger, airshow star Sean D. Tucker, and many others. Organized by Tom Poberezny, along with family and friends (who are also behind the documentary), the two days of events will also include the unveiling of the Bob Hoover Hall of Honor, created to recognize Hoover and a handful of others whose accomplishments, passion, and commitment to aviation stand apart.

Originally, Poberezny said, the Bob Hoover Hall of Honor was to exist exclusively online, and be limited to Hoover and the other original inductees to be announced. That plan has changed, with Embry-Riddle Aeronautical University having agreed to host the hall at its Daytona Beach, Fla., campus Poberezny said.

“They’ll look at adding one person a year,” Poberezny said, though he noted the standards will be very high, indeed. Future inductees must not only have accomplished a great deal as aviators, but share with Hoover other qualities such as character, and the ability to communicate, educate, and inspire generations, as Hoover has. “We want to keep it very limited.”

The tribute dinner on Feb. 21 will also include a look at the various other documentaries made about Hoover’s life. Poberezny said it takes more than one movie to cover all of Hoover’s achievements—as a fighter pilot, test pilot, airshow performer, author, and educator. Hoover’s Rockwell Shrike Commander, which Hoover flew in airshows for years demonstrating energy management skills few, if any, pilots can ever hope to match, is now in the collection of the Smithsonian National Air and Space Museum.

While his achievements set him apart (Hoover, a decorated airman, flew 59 combat missions, escaped a German POW camp, stole a Focke-Wulf Fw 190 and flew it to the Netherlands in World War II; he was Chuck Yeager’s chosen backup pilot, and flew the chase aircraft when Yeager broke the sound barrier in 1947), Poberezny said it is Hoover’s passion for paying it forward, for teaching and inspiring future generations, that inspired the creation of this event, and the hall of honor that will carry Hoover’s legacy forward. The ever-modest Hoover embraces that concept, Poberezny said, noting that Hoover himself was inspired by another aviation great, Roscoe Turner.

Tickets to the Feb. 21 dinner cost $950, with proceeds to benefit aviation scholarships to be awarded in Hoover’s name. Those tickets have sold quickly, and by Jan. 31 only a few dozen remained. Poberezny noted that sponsors will cover the cost of having students from nine different schools travel to and participate in the various events, including a special invitation-only luncheon with Hoover and other event hosts at the Four Seasons, “A wonderful opportunity for these kids.”