Get the app Get the app
News & Media Training Tip: 'Proper spacing is critical'

Rolling out of the turn from base to final, a soloing student pilot reduces power to maintain a proper glide path while keeping an eye on the preceding arrival, which should soon taxi clear.

"What’s he doing down there?" the student wonders when it becomes apparent that the aircraft below appears in no haste to vacate the runway. And with another trainer entering the pattern’s downwind leg, the student is starting to feel a bit squeezed.

Brushing aside the distracting combination of perplexity and annoyance, the student pilot begins to react to the unfolding complications by slowing down promptly and mentally preparing for a go-around. If the aircraft ahead has not cleared by a point certain, the landing will be rejected.

What else can be done? Re-announcing the aircraft’s position on final is a good idea (but this is not the time to initiate a discussion about traffic pattern etiquette, tempting as that may seem).

Is your landing light on? It should be—even in broad daylight. Perhaps the dawdler below will see it while turning toward the nearest taxiway, and expedite!

Many training scenarios lead a pilot to the decision to perform a go-around. Most of the balked-landing scenarios are based on correcting imprecisions in your own flying—things like being too high on final, or having difficulty maintaining directional control in gusty winds. It’s exasperating to have to go around from a perfectly well flown approach thanks to the actions or thoughtlessness of another pilot.

But here’s a question: Was it entirely the other fellow’s bad flying at fault?

Take some time before the next flight to re-examine your own pattern procedures; it’s often observed that many pilots fly the same rote-learned traffic pattern regardless of emerging circumstances that call for using precise procedures to maintain a safe margin.

For example, this excerpt from arrival procedures used at one of the 2014 AOPA regional fly-ins reminded inbound pilots to "ensure that you have at least a half-mile minimum separation between you and the aircraft you are following. Proper spacing is critical so please pay attention to airspeed and minimum separation," it said.

Note that this was guidance for minimum separation. Then, next time you fly the pattern at your own airport, remember that even without a fly-in in progress, "proper spacing is critical." 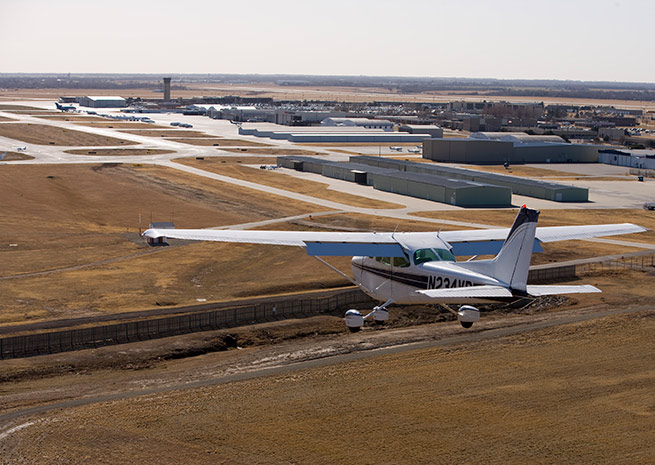