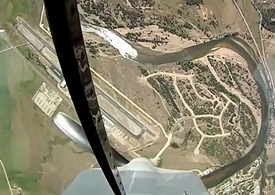 Roughly a mile above Cascade Airport in Cascade, Idaho, Rich Stowell did something nearly unthinkable to most pilots: The veteran CFI pulled the mixture to idle cutoff before diving his American Champion Super Decathlon for speed and demonstrating a spin out of the backside of a loop.

In the high-drag, low-speed regime of the spin, the Decathlon’s propeller came to a complete stop. No, Stowell had not lost his mind.

“The adrenaline levels were certainly heightened above normal,” Stowell admitted in a telephone interview with AOPA, though he noted it was not the first time he has seen a propeller halt in flight. With more than 33,400 spins under his harness, the acclaimed CFI (Stowell is the 2006 FAA National CFI of the Year, and the FAA's 2014 National FAAST Team Representative) has flown with at least a couple of students whose anxiety prompted such a tight grip on the throttle they pulled it far enough aft to achieve the same effect, a condition Stowell calls “fright idle.”

With video cameras rolling, Stowell set out to demonstrate that pilots should not fear spins, but learn to master them. Stowell posted the resulting YouTube video July 7 with a salute to Harry Hawker, the co-founder of Hawker Aircraft who, while working as a test pilot, was widely credited with the first intentional spin and recovery 100 years ago, nearly to the day (though the exact day Hawker achieved this feat cannot be confirmed with certainty).

Hawker miraculously survived unscathed a crash that followed an unintentional spin, and nearly immediately set out to prove that recovery is possible. Hawker’s demonstration involved a spin out of a loop with the engine shut off, and Stowell, after demonstrating more conventional spins, replicated that feat on camera.

“It opens your eyes even though you know it was coming,” Stowell recalled of his engine-out spin. He recovered the airplane to near-level flight, aiming the nose slightly down to build speed, and pushed the mixture control back in allowing fuel to flow. The engine sprang to life, with no need to resort to Plan B (engage the starter) or Plan C (dead-stick landing on the 4,300-foot runway directly below).

“We were all good,” Stowell said, noting that he had considerably more altitude (about 5,000 feet agl) on his attempt than Hawker reportedly had in 1914—about 1,200 feet above the ground. “He was a lot braver than I am.”

Stowell notes very clearly in the video that the method Hawker used (and Stowell replicated)—centering the controls—is not the most effective method to stop spins in a typical general aviation aircraft. In short, don’t try this at home, as results may vary.

The exercise was part tribute to Hawker, and also another way to deliver a message Stowell has been teaching for more than a quarter century: There is no reason to fear the spin.

“As a matter of course, we shouldn’t be afraid of it,” Stowell said. Spin training (in aircraft approved for spins, with a qualified instructor) gets pilots past the initial “shock” of the experience, and prepares the mind to handle the situation if it should arise unexpectedly. Stowell said there are two key phases to his own spin training: teaching the basic recovery from a one- or two-turn spin, followed by scenario-based training in which a spin is induced during other maneuvers, such as an uncoordinated base-to-final turn, among the most common causes of stall/spin accidents.

“If pilots just stop at the one or two-turn intentional spin, they’re missing the other important part that kind of finishes the training off and puts it into context,” Stowell said.

Over 25 years of presenting stall/spin seminars, Stowell has noticed that the crowds “never get any smaller,” so there’s little question “the interest is there.” But fear and misunderstanding get in the way.

“The majority of instructors probably aren’t comfortable or qualified … even though they have the spin endorsement,” Stowell said. The instructor’s fear and trepidation is passed on to students, knowingly or otherwise, and some of those students go on to become instructors themselves—CFIs reluctant to explore the spin regime. Such fear, Stowell said, is “unnecessary.”

Pilots who train for competition aerobatics soon learn to think of spins as just another maneuver—and aerobatic training is “often the first time the pilots have an opportunity to encounter a stall as something that’s getting in the way of something else,” Stowell said. With a little practice, recovery becomes routine, and reflexive. “You don’t think twice about it.”

Stowell has trained more than 1,000 pilots to master stalls, spins, and recoveries, and prospective students can rest assured that he won’t kill the engine—on purpose, at least.