Ocean to ocean in a Cessna 150

As Rodney Bowers tells the story, it was all his son Paul’s idea.

But Rodney, 89, had reservations about the two men flying Rodney’s Cessna 150 from the East Coast to the West Coast just as soon as the architectural engineering classes Paul teaches at Penn State wound up for the semester. Retired for 13 years from the construction business, and flying a bit for recreation and occasional trips to Florida, Rodney Bowers could think of several reasons to punt on Paul’s proposition.

Paul corroborates that version of how he and his dad almost didn't fly "The Ultimate Cross Country." He had always wanted to do some flying with his father, he said. He was prepared for some initial reluctance on his dad’s part to buy into the idea that they fly out in the Cessna to wet their feet in two oceans.

No pressure, he told Rodney. "Don’t give me an answer now. Just think about it."

Surprisingly, Rodney, a 3,400-hour instrument-rated pilot and a member of UFO (the United Flying Octogenarians) promptly replied, "Yeah, I’d be up for that."

Describing in a phone interview how he got to yes, Rodney Bowers said it was not the first time the idea been raised. For a variety of reasons, this spring offered a good chance for both of them to go—if he could just get over his own reasons to hesitate.

He told himself, "Rodney, quit thinking about yourself. You’re retired. Tell him you’ll go."

Looking back now, "It was a fun thing, a nice thing to do with my son. I would have regretted it if I had not done it." 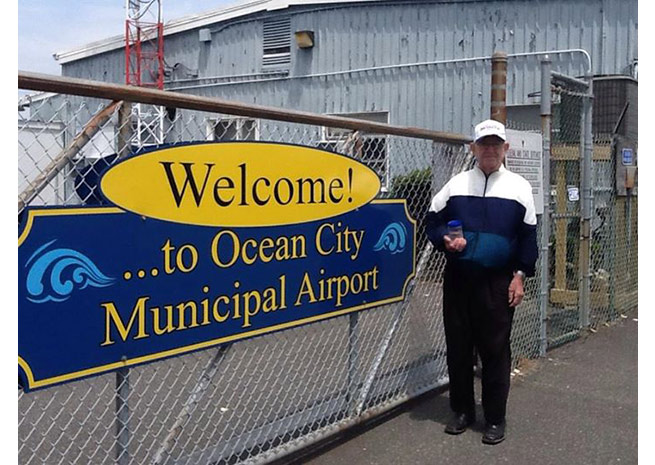 Once it was a go, there was one awkward logistic to overcome: Rodney’s home airport, Clearfield-Lawrence Airport in Clearfield, Pennsylvania, northeast of Pittsburgh, isn’t the ideal jumping-off-point for an ocean-to-ocean excursion.

So on May 13 the Bowers took off for the nearer sea, landing two hours later in Ocean City, New Jersey, and walking down to the beach, where Rodney scooped up a container of sea water that he would empty 10 days later in the Pacific.

Then they returned to Clearfield to prepare to push west—a maneuver that "saved us one night’s motel," Rodney Bowers quipped.

Considering that they were making the trip in a 90-knot, 100-horsepower single, it may be unnecessary to report that the pair planned an unhurried journey. But other decisions were more strategically flexible.

For one, they opted for a southern passage to avail themselves of lower mountain-crossing altitudes out west, at times hugging the Mexican border, and never flying higher than 9,500 feet msl. Another call was to remove the Cessna’s wheelpants, putting the weight allowance to better use carrying maximum fuel.

Many pilots pairing up for a long cross-country would alternate leg for leg at the controls, but not the Bowers. Rodney flew the westbound trip, and Paul, a former Air Force officer and private pilot with 500 hours, took over when eastbound. (Paul, the architect, later observed that this bit of cockpit-position engineering produced the unanticipated result of giving him the northerly view from the aircraft on both the westbound and eastbound flights.) 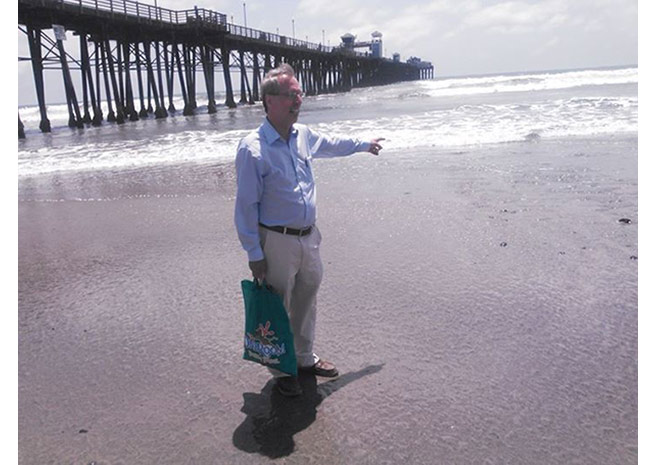 As illustrated in graphics Paul posted on his Facebook page and in an Excel-spreadsheet trip log, the westbound flight from Clearfield concluded May 23, after 13 stops, in Oceanside, California, where Paul posed (facing north, salt water on his left) for pictures on the beach.

Navigating with apps on dual iPads kept the flight on course and the pilots basically aware, thanks to radar overlays, of weather. Still, Rodney said he made it a point to "pull the (course) line over an airport" for extra insurance on many legs of the journey.

On June 4, 15 flight legs later, the Cessna that Rodney has owned for 10 years made its second landing in Ocean City, N.J., a short walk from the beach that marked the trip’s eastern terminus.

Before the trip, Paul had never before been west of Texas. He said that while the Rockies exacted their usual tribute of awe, he was just as impressed with aerial views of horizon-to-horizon expanses of wind-generating turbines in some places. There were also the unexpectedly vast stretches of oil fields out there.

"So many oil fields… You could smell it in the air," he said.

The flying remained basically uneventful, but with spring coming on, the performance-robbing effects of high density altitude made their presence felt on a takeoff from New Mexico’s 4,456-foot-high Las Cruces International Airport. Once, while California-bound with the Rockies behind them, a surprise bout of carburetor ice arose. Fortunately, it was handled successfully in the standard manner,  Paul said, "with no place to land down there."

At some point, Rodney recalled, "somebody called it 'the ultimate cross-country'" and the name stuck.

There was also some banter as to the proper beachfront ceremony for the pilots to conduct at the climactic moments of a trip bookended by the Atlantic and the Pacific.

"People thought we should take our shoes and socks off and put our feet in the water," he said.

As Rodney concluded his tale it seemed natural to ask him whether the flight’s completion had closed the book on a fine adventure or marked a beginning for the flight team of Bowers and Bowers.

The question seemed momentarily to put him back in his preflight mode of mulling it over.

"Well, who knows, " he said. "We may decide to do something again." 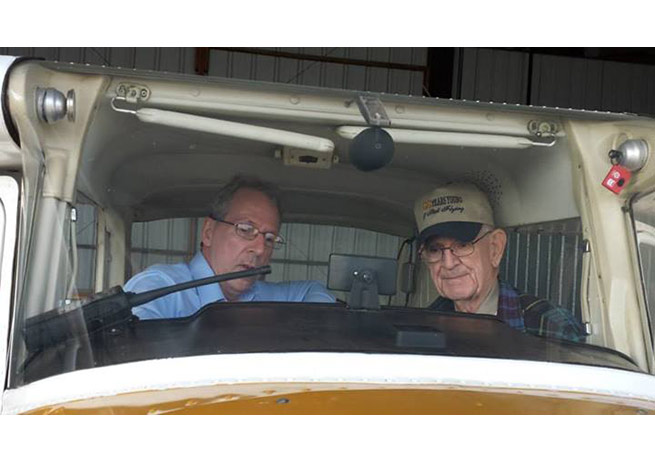 Dan Namowitz has been writing for AOPA in a variety of capacities since 1991. He has been a flight instructor since 1990 and is a 35-year AOPA member.
Go to Dan Namowitz's Profile
Topics: U.S. Travel, Travel, Navigation